Making houses better, one camper at a time

One of the advantages to being part of the GreenBuildingAdvisor team is an invitation to Joe Lstiburek’s Building Science Summer Camp (that’s Joe, on the right, and me in the photo). This is an invitation-only gathering of 200 of the top building scientists, engineers, and architects in America. Of course, builders and remodelers are invited, too. I was there as a member of Peter Yost and Dan Morrison’s new GreenBuildingAdvisor project. Lstiburek is on the advisory team, too. The experience was absolutely amazing.

Summer camp seems to be largely an indulgence-of-curiosity project for Lstiburek. He just looks at the building science community and asks himself, “Who is doing interesting research these days?” He calls them up and offers them a chance to speak about what they are passionate about. The talks can range over a pretty wide area. 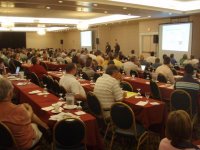 A presentation by Henry Gifford was particularly earth shattering. Recently the USGBC (http://www.usgbc.org/) had published a report from the New Buildings Institute (http://www.newbuildings.org/) that showed that LEED certified buildings perform 25% better than non-LEED certified “CBECS” buildings (www.eia.doe.gov/emeu/cbecs). Gifford is a building efficiency expert in New York City and he sees these all-glass LEED buildings going up and he wonders how they can possibly perform better than the CBECS average. So he downloaded the data and discovered they were comparing mean data for all age CBECS buildings to median data for new LEED buildings. He made some adjustments and was able to demonstrate that the new LEED buildings were actually performing 30% worse than other buildings of the same age. His point was that using models to predict is a good start, but until we go back and test our work, we’re not doing building science—we’re doing building theory (and getting pretty close to religion if we just take things on faith).

GreenBuildingAdvisor.com is announced!
This was a great setup for Peter Yost to step in and announce that Building Green Inc. (publisher of Environmental Building News) and The Taunton Press (publisher of Fine Homebuilding magazine) had partnered to build GreenBuildingAdvisor.com. One of their (our) initiatives will be to publish case studies of energy-efficient and green homes; the main difference is that they’ll get the energy bills of these houses and talk about actual energy used, rather than predicted. I’m starting with four of Chandler Design-Build’s recent homes as part of the first wave. It’s an exciting project to see how the theory really works out over time as compared with other excellent builders across the country, if a little intimidating.

Energy Star for Homes’ recent spec boost is announced!
Not to be outdone, the national director of Energy Star for Homes, Sam Rashkin, announced the latest “version three” release from Energy Star and their newest program, Advanced New Home Construction. The version three adds new ventilation, humidity control, water management, thermal bridging, HVAC installation testing, radiant barriers, and overall size limitations to Energy Star’s specs. Rashkin is a guy who likes to knock beehives with a stick, and his announcement that Energy Star for homes was going to get a whole lot harder set the whole room to buzzing. His announcement of size limitations drew applause from the summer campers.

He went on to show what would be required to meet the Advanced New Home Construction standard: 50% better than code, triple-glazed windows, super HVAC, and size limits… Even I was thinking this will work at $10/gallon, but maybe America’s not ready to go there yet. Saying “no more Hummer houses” is one thing but it feels like he’s taking Energy Star away from the market. It’s a very interesting time to be part of the green-building movement.

After class we reconvened at the clubhouse for feasting, drinking, and science discussion until late in the evening. I was welcomed to the clubhouse by Betsy Pettit, the renowned architect/writer/speaker who is a partner at Building Science Corporation (http://www.buildingscience.com/). Pettit and Lstiburek renovated the 150-year-old Massachusetts farmhouse into a very energy-efficient building. You can read about the process at Fine Homebuilding online (http://www.taunton.com/finehomebuilding/how-to/articles/remodeling-for-energy-efficiency.aspx?ac=fp).

Is Shismaref the new Greensburg?
There was a significant Alaskan contingent who told me they are really getting hit hard by global warming. The pack ice that protects barrier islands in the northern Bering Sea is coming too late in the season. The shores, which are a composite of sand and permafrost, are exposed to fall storms that they never experienced before and the islands are melting into the sea. This is problematic when there are villages on the island.

I spoke with people who were working on the social and logistical challenge of relocating villages to the mainland. Building durable, healthy, and energy-efficient homes for people who have been subsistence living on remote islands is challenging enough; the social implications are very knotty. Many of the elders would prefer to sink into the sea with the rest of their way of life. The ethical and moral complications are mind boggling and the folks who are working on them, awe inspiring. To bring home the reality of what they are dealing with they brought along a gift from the community, raw bowfin and beluga whale and seal jerky with seal oil dip. I couldn’t bring myself to sample the seal oil but the raw bowfin was quite good. The rest may be an acquired taste…

—Michael Chandler is a builder, master plumber, and electrician near Chapel Hill, North Carolina. His website is www.ChandlerDesign-Build.com