Make informed selections based on more than R-value 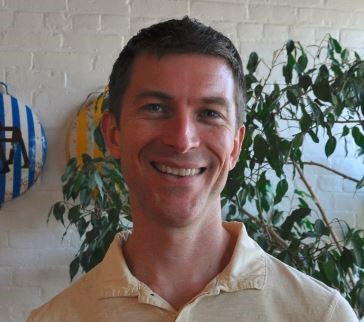 The insulation choices we make can significantly impact the amount of embodied carbon that is in our construction projects. Last year, I set about determining how much of an impact different materials have. I also wanted to find a way to make the materials selection process easier for others.

The lifecycle “cost” of carbon involved in building construction can be measured by the global warming potential (GWP) associated with the manufacturing and use of each building component. This is measured in carbon dioxide equivalence (CO2e).

My focus was specifically on insulation, which is a product that customers and contractors generally choose based on cost, durability, availability, and building science. A material’s GWP is not typically a decision driver.

Does Your Insulation Have Low Embodied Carbon?

How to Choose Insulation

Plan Ahead For Insulation

Since there wasn’t a broadly accepted way to both easily and scientifically measure carbon for insulation materials, I began by looking at Environmental Product Declarations (EPDs). These detailed reports are published by manufacturers and trade organizations, and provide loads of data on “life cycle costs.” See Figure 1 for an overview of how that data gets broken up.

Life cycle stages as defined in the European standard EN 15978

I looked at insulation products that cover a lot of square footage in the construction or renovation of foundations, above-grade walls, and ceilings. From there, I made a list of available products ranging from blueboard to fiberglass to wood-fiber insulation, and then compiled every available EPD—the list included close to 200 materials. Priority was given to non-expired EPDs (they have a 5-year shelf life) for products manufactured in North America, but European-manufactured materials were acceptable if no North American products existed or the source was exclusively European.

Most EPDs report GWP based on one square meter of the thickness of material needed to reach RSI-1, which is R-5.678 in imperial units. If an EPD used other units, these were converted to this common measure. Referring back to Figure 1, the data included is from the Cradle to Gate stages, meaning the extraction of resources from the earth until the point that a product leaves the factory.

All EPDs were assessed and averaged to create Table 1:

Traditional insulation materials containing HFC blowing agents had the highest GWP. For example, the GWP of closed-cell spray polyurethane foam with HFC blowing agent is 14.86 kg CO2e per 1 m2 of RSI-1 worth of material; and 25psi XPS is over three times that, at 46.51. In contrast, mineral wool batts are a more modest 3.25, a value partially driven by the energy-intensive process of melting glass, stone, or slag in manufacture. GWP is still lower for foam products that use hydrocarbons as blowing agents: polyisocyanurate is 2.32 and phenolic foam is 1.54. Fiberglass materials fare well, with unfaced batts under 1 kg CO2e. And carbon-containing insulation materials such as cellulose and wood fiber can have GWP less than zero, due to low energy intensity to manufacture plus credit for storing carbon in the product itself.

The next step was to make all this data useful. Tools like the Embodied Carbon in Construction Calculator (EC3) are already on the market and open-source, but it is hard to simply compare apples to apples, so I put everything into an Excel-based calculator. A user simply puts in R-value, square footage, and two different material options for a given assembly. The tool then calculates carbon savings, and to make it a bit more comprehensible, equates things to equivalent miles driven in a year, number of propane cylinders burned, etc.

Now I needed to get this in front of building professionals. Here I highlight two projects that participated in a pilot program in 2020, both with builders that I hoped would continue using lower-GWP materials in future projects.

The first project was an affordable four-plex in northern Vermont. The building footprint was 2600 sq. ft. Their plan was to use XPS under the slab and exterior foundation walls, which was standard practice for them. Using building take-offs and the calculator, I was able to quantify an estimated 52 metric tons of CO2e savings by replacing the R-15 of under-slab XPS with EPS Type IX, and the R-20 of exterior foundation wall XPS with polyisocyanurate installed on the interior side; see Figure 2.

The builder reported that the price difference on the sub-slab substitution was under $100. They also saw some labor savings, as the EPS Type IX was ordered in a thickness such that they only needed a single layer (they’d previously been laying two thinner layers of XPS). As for the polyiso on the interior, the installation of Thermax had the additional benefit of avoiding local rules on covering exposed foam board. The builder’s focus was on speed and price, and these solutions worked well for the project. He was open to the substitutions but not necessarily motivated by the carbon savings alone.

The second project was a 3700-sq.-ft. single-family home in Chittenden County, Vermont. They had priced out 4 in. of XPS and fiberboard for the exterior side of the above-grade walls, in addition to XPS for all below-grade work. Noting that blueboard is “used more often and easier to get,” the project team was not interested in swapping out the XPS below grade. It was not the first time I’d heard this. One supplier told me that XPS is “tried and true” below grade. People trust it and know how to install it; it is considered a standard practice. Using something else can be perceived as risky even if that’s not quite the reality.

The project team was, however, open to swapping out the above-grade continuous with phenolic foam after seeing the calculations on embodied carbon impact. They appreciated that the material, which they hadn’t worked with before, was R-8 per in. and were convinced by its near price parity with XPS. Fiberboard was a consideration they liked but it worked out to be around double the price, adding several thousand dollars.

The Kooltherm “K12” phenolic foam ended up being about $2000 more for the job than XPS. The crew liked using it, and the builder shared that the architect on the project planned to use it again and even spec another version of phenolic foam (“K9”) for interior foundation walls on another project. For this project’s above-grade walls, just 3 in. provided R-24, which is better than the R-20 of the thicker XPS; see Figure 3. This single substitution worked out to about 52 metric tons of CO2e averted (coincidentally, roughly the same number as the case above).

The builder told me that the biggest barrier to using this in the future is supply, stating, “It needs to be on shelves.” At the time, had they committed to a truckload—calculated to be enough for this job, plus their next three projects—its cost would have come out less than XPS.

GWP is not the only consideration for choosing insulation. The BuildingGreen Guide to Insulation (3rd edition) summarizes insulation impacts by environmental attributes and health concerns, in addition to performance. The Guide lists hazardous components, chemical byproducts and residuals, fiber shedding, end-of-life issues, durability, and cost—all items that don’t clearly show up in an EPD. Roughly speaking, the insulation products with the lowest (best) GWP tended to be those on the “healthy” end of the toxicity scale and with higher recycled content. See Table 2: 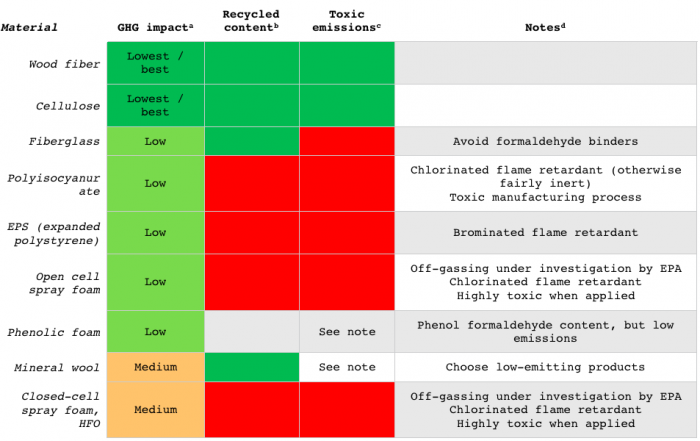 XPS and closed-cell spray foam using an HFC blowing agent were the two “worst” products from the GWP perspective. Legislation is shifting things. In Vermont, for example, starting January 1, 2021, XPS (boardstock and billet) and two-component spray foam (high pressure and low pressure) were prohibited from using certain HFCs and related blends. It will likely be many years before this is more widespread. And the reality, at least in June 2021, is that the new HFO/HFC formulations of XPS are not widely available even in places where it’s the law. For example, I’ve been told by RK Miles that I can get the new DuPont version in Manchester, VT, but have not found any at building suppliers near Burlington. (For more on the new XPS, see “XPS Makers Announce More Planet-Friendly Formulations.”) And while the new products’ impact is better, it is still not great compared to many alternatives. Other potential downsides (Table 2) are not expected to be improved by the switch in blowing agent.

There are other developments happening, too.

Glavel is a cellular glass product for below-grade applications. The aggregate version comes in giant bags imported from Europe, but in November 2021 a plant is coming online to manufacture the product in Essex, Vermont, at roughly 1/3 the current imported price, according to sales manager Alexandra Carroll. The carbon footprint of Glavel is substantially lower than XPS, its main below-grade competitor. Glavel plans to be powered by renewable energy, using recycled glass as feedstock, and its website notes that livable wages will be paid at the new plant, stating the company’s belief in fairness, environmental stewardship, and a clean-energy future.

Meanwhile, in Maine, another North American manufacturing facility is setting out to create a product currently only available at scale from overseas. When GoLab begins manufacturing its wood-fiber products, it will reduce reliance on European manufacturers like Steico and Gutex. According to GoLab chief marketing officer Scott Dionne, the plant in Madison, Maine, will be operational by the end of 2021, producing loosefill wood-fiber insulation by Q2 2022, wood-fiber batts by Q3/Q4 2022, and wood-fiber board by Q4 2022/Q1 2023. Dionne noted that because Europe has three times the wood cost and twice the energy cost of Maine, the US-manufactured loosefill product will be priced on par with cellulose, batts will fall somewhere between fiberglass and mineral wool, and boards will be similar to foam and less than mineral wool. This is substantially different than the present case, where the attractive carbon impacts of wood-fiber products is countered by high prices and long lead times.

Folks who care about embodied carbon can dramatically reduce the carbon footprint of their buildings by making careful choices, often without adding much cost.

With new regulations coming online and more products become available, the ability to lower the carbon footprint in renovation and new construction projects is getting easier. But it still takes openness doing things a bit differently and changing with the times.

To read more detailed version of this work, click here.

Brian Just is manager of engineering at VEIC, a nonprofit organization aimed at reducing the economic and environmental costs of energy use. Main photo by Loren Nelson, courtesy of Fine Homebuilding.