Winter is a good time to review plans and specs

As they set out to build a single-family Passivhaus on Potwine Lane in Amherst, Massachusetts, Alexi Arango and LeeAnn Kim asked themselves, “Is it possible to live without burning fossil fuels?” One measure of success would be meeting their goal of net-zero energy performance. This is the second blog in a planned series.

No concrete happened this week and neither did much else — my guess is that the cold had something to do with it. The temperatures were in the teens and the single digits all week. Still, I’m amazed at what the crew accomplished despite the frigid temperatures.

The site (see the photo, above right) kinda looks like a trash dump at the moment, but if you look closely there are a couple of interesting things to see. Look beyond the tarps; they are just protecting the foundation from the snow flurries we’ve been experiencing.

You can see what appears to be a layer of dirt deposited into the EPS foam container; this is actually more of the structural fill. Underneath the structural fill are buried the sewage lines and water piping to the kitchen (to the right, in black) and the first floor bath (toward the back, in black). The new white pipe off to the left is the radon mitigation pipe that will run up to the attic. This pipe connects to a series of perforated pipes imbedded under the structural fill that will serve to collect any radon gas that might build up under the concrete floor and vent it to the roof. The gray piping in the middle is the conduit to the electrical panel.

February 5, 2014: Passive houses tend to be cute and boxy

OK, now it’s snowing like crazy. Looks like there won’t be any progress on the construction for a while. In the meantime, I thought I would begin to explain some of the special traits of the Potwine Passivhaus in more detail. Below, I’ll show the floor plans, but first we should talk about why the home is shaped the way it is.

Looking at the exterior shapes of Passivhaus buildings, you might have noticed a common theme — these houses take the form of a box, more or less. Here’s why: it’s an attempt to achieve a low surface area to volume ratio.

Imagine a square box versus a long rectangle, but make sure that both are sized such that they each enclose the same amount of volume, as shown in the drawing below. 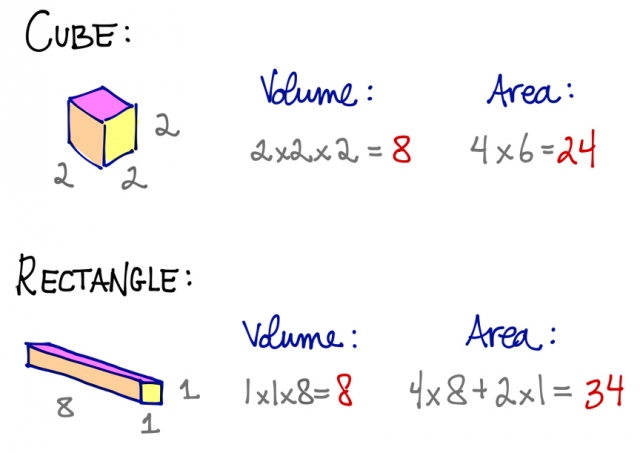 The problem is that heat energy is lost through the surface area (the walls, roof, floor, and windows), so more surface area will allow the same volume of space to cool down faster. Passivhaus buildings often employ boxy designs because they yield better thermal performance. 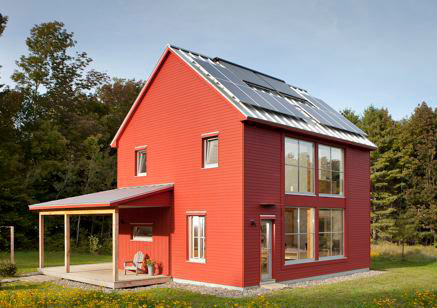 I’m sure that many would find the typical boxy Passivhaus to be extremely limiting, but that’s where the brilliance of architect Matt O’Malia’s GO Home is apparent (pictured at left): he’s made a boxy and plain structure seem open, interesting and bigger than it really is.

One of the project’s first steps was to choose among the preset house designs and floor plans available on GO Logic’s website, which offers plans ranging from single-story 1,000-square-foot homes up to two-story 2,500-square-foot homes.

I initially came to the project thinking that I would want to live in a bona fide tiny house — a romantic dot on the landscape surrounded by expansive open space — but the thought of raising a family in a tiny house eventually scared me off.

I gravitated toward a three-bedroom design, partly due to the recommendation of my real estate agent, Mike Seward: three-bedroom homes tend to be easier to sell. A second story appealed to me because I felt that views of the surrounding landscape and wildlife would be enhanced by the extra height, and more space around the home would be available for a vegetable garden.

Passivhaus buildings cost more to build, but less to operate

After discussing my budget with Matt O’Malia, it was clear that the 1,300-square-foot model was the most I could afford. Although I didn’t know it at the time, the actual usable square footage is even smaller: 1,100 square feet, about half the size of the average home in the U.S.

At this point, most people would balk at the idea of a Passivhaus: they could have a standard 2,200-square-foot house for the same upfront cost!

Don’t get me wrong: I’m not saying that a Passivhaus is more expensive. The upfront costs are higher, but the monthly costs are lower (almost zero) — one of many ways in which greener products are unfairly financially disincentivized.

The next step was to figure out how to make the most of that 1,100 square feet.

I expended a tremendous amount of energy fussing with the floor plans of this home, much to the terror of my wonderful team of architects at GO Logic (Matt O’Malia, Todd Boyd, and Svea Tullberg). Even though GO Logic provides off-the-shelf plans, I felt the need to demand certain changes to their plans, then promptly reversed those changes, only to eventually reinstate the original changes. In the end, we must have gone through at least six iterations of the floor plans. I owe many thanks to Matt, Todd and Svea for their amazing patience, professionalism and talent.

I learned a lot through the process and I thought I would share why I settled on the floor plan pictured above, which I believe is going to be terrific. I’m including only the first floor in this post, the second floor is just as cool, but it will come later. 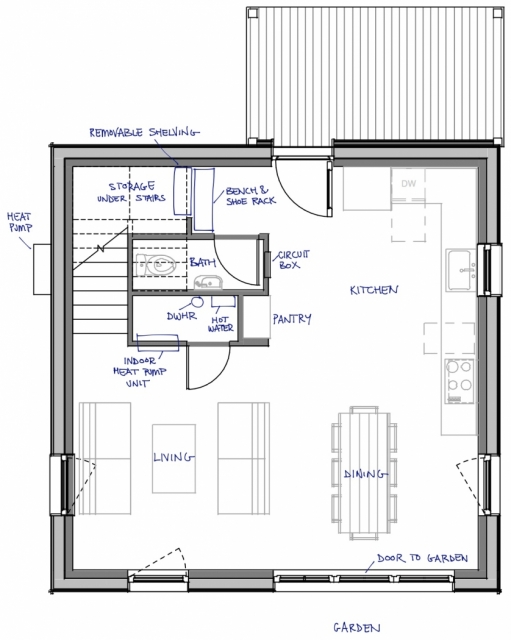 I’m not an architect, but over the years I’ve noticed a few tricks that seem to make a small boxy space feel bigger than it really is. A few years ago, I attempted to use these principles in the layout of my lab at Mount Holyoke College, a small 600-square-foot research space for next generation solar cells — and the results were fantastic. Here are my recommendations (from an amateur’s perspective):

Below, I’ll explain how I went about implemented these design rules.

To get a feel for the floor plan, I generated 3D renderings of the interior using the Mac app “Live Interior 3D Standard Edition.” The app lets you draw a floor plan and then creates a 3D space that you can navigate through. I didn’t like the tacky color and faux realism of the renderings, so I used my iPad to trace some of the critical scenes as line drawings. The simple black and white lines might be a little difficult to look at at first, but they allow your mind to fill in the extraneous details. 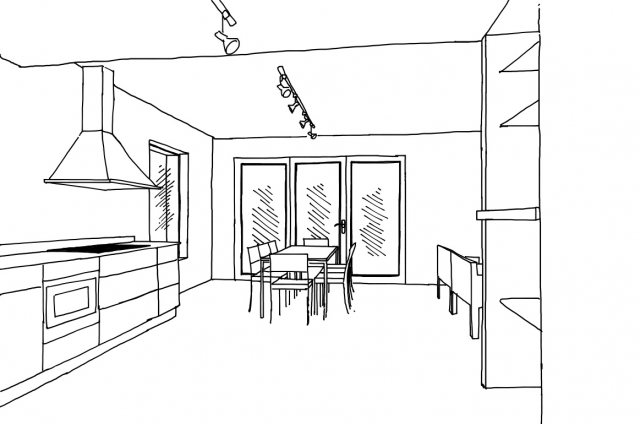 The entrance leads directly into a single open space that serves as both the kitchen and dining space (above) — hence the “dininitchen” — a large area for gathering, cooking and eating. Three large windows behind the dinner table open up the space even further.

The kitchen counter spans the left wall, with the induction cooktop and range hood almost spilling into the dining area, blurring the distinction between the two rooms. A small built-in counter and shelving area to the right will serve as a pantry. 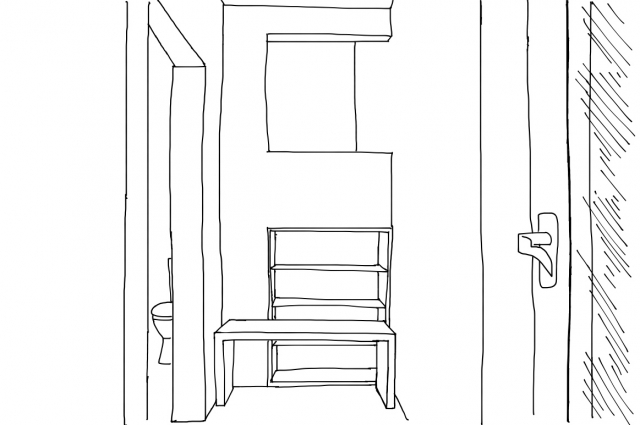 Off to the right of the entryway is the mud room and a half bath. A small bench to remove your shoes sits in front of a removable bookshelf, giving access to hidden storage under the stairs. An opening in the upper wall looks through to the staircase landing, helping to bring in light from the large window in the stairway and extending one’s line of sight beyond the small mud room. I wanted the bathroom to be tucked away from the kitchen and the living room, and to be easily accessible from the outside. 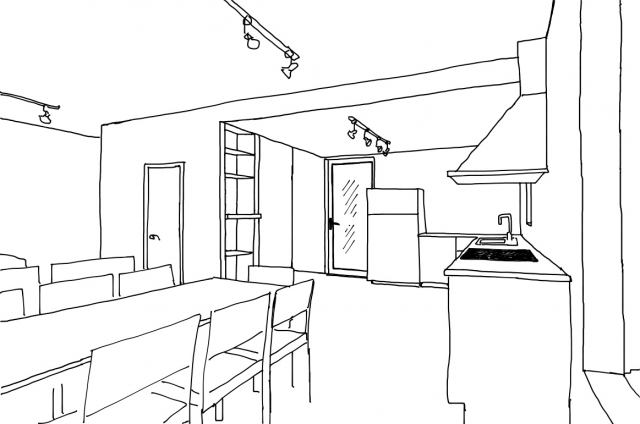 Looking from the dining room back at the entryway (above), notice how the kitchen counter follows an L shape along the wall — the layout allows for ample counter space while giving easy access to the front door, half bath (to the left of the door), the pantry, the dining area, and the living area. The straight line of the countertop along the right wall lengthens the kitchen area, creating the sense of an usually large kitchen.

The closet off of the living area doubles as a storage space and utility room for two of the on-demand hot water heaters and the drain water heat recovery (DWHR) pipe. 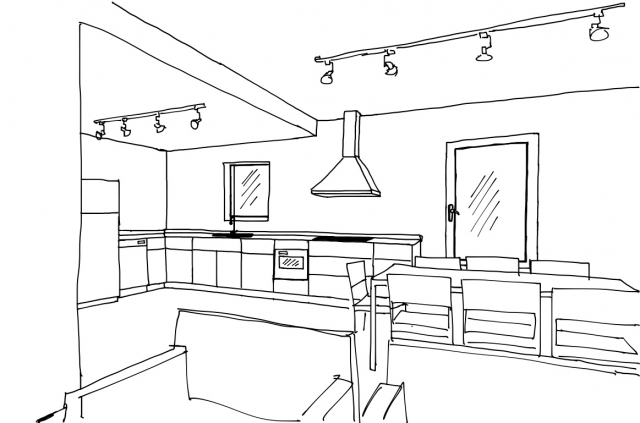 A logical path from the refrigerator to the dishwasher

The kitchen is laid out to maximize the efficiency of manufacturing dinner. The cooking process moves from left to right, starting with the vegetables in the fridge, moving to the counter, washing in the sink, cutting on the next counter, frying on the cooktop, and then serving at the dining table.

Cleanup follows the same linear pathway in reverse: dirty dishes move from right to left; from the dining table, to the counter, to the sink, and into the dishwasher. 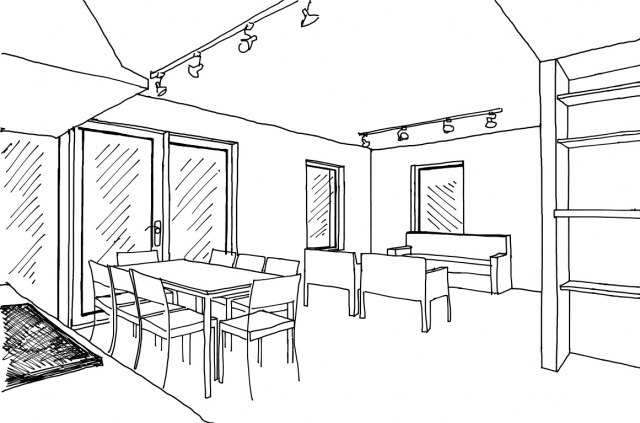 How light moves through the house

One aspect that I love about this design is how sunlight moves throughout the space over the course of the day. The image above is looking at the living area from the kitchen.

The morning sun from the east filters into the kitchen window through the row of trees on the east property side. Breakfast at the table is warmed by the morning sun as well.

Later in the day, the sun might be too strong at the dinner table — a tremendous amount of energy is captured by the three large south facing windows — but the living room offers a refuge with some protection from the sun. Afternoon sun keeps the living area illuminated continuously as the sun moves from the south-facing window to the west facing window later in the day. In the afternoon, the kitchen will be free of sun, so cooking in the heat of the sun is not a problem.

Stay tuned to find out if the design actually works in practice!