Hudson Valley Preservation strips a late 1700s house down to its original timber frame, and salvages components from two major renovations in order to tighten up the building envelope for net-zero performance

Built c. 1780, this timber-framed house sits on nearly 200 acres in Washington Depot, CT. The client purchased the property in November 2019, and it has been in the hands of Hudson Valley Preservation (HVP) ever since. The primary goal is to make it a net-zero-energy home. Because of its age and condition—not to mention six fireplaces—a deep-energy retrofit was the only way to get there.

The house was built using plank-frame construction methods. Originally, it had a timber frame with walls made of 1-1/4-in.-thick vertical oak planks running from sill to plate; the vertical planks were in lieu of studs. (This type of construction dates to the 17th century, and is most often seen in Massachusetts, Rhode Island, and New Hampshire.) Here, the planks were nailed to the exterior of the timber frame; wood clapboards were used for exterior siding; and interior lath and plaster were applied directly to the planks. There were no wall cavities, and there was no insulation. 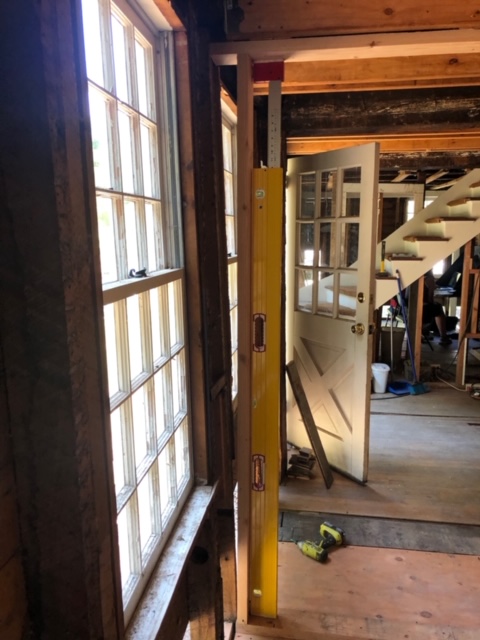 A major renovation around the turn of the 20th century got rid of nearly all of the planking. The carpenters added studs and built some interior walls on the first floor. Today, those walls and doors are relatively plumb, whereas nothing else is. In 1972, a second remodel concentrated on the second floor, and resulted in all of the partition framing that is there now.

HVP Founder Mason Lord speculates there was some kind of event that made the house shift 4 in. to the north. To correct that, on the north and south elevations—the eave sides—HVP will add tapered studs to the exterior of the existing tongue-and-groove white pine−board sheathing. The idea is to shim the walls from 0 in. to 4 in. on one end, and vice versa on the other in order to plumb them…