Does Cheaper Solar Mean We Can Forget Efficiency?

The ramifications of the falling cost of photovoltaic systems

Solar energy has sex appeal. If you want to show the world you’re doing something to reduce pollution, you put photovoltaic (PV) panels on your roof to generate clean electricity. Even better, you drive a plug-in hybrid or an all-electric car and charge your car’s batteries with your clean solar electricity.

The good news for solar enthusiasts is the cost of installing a solar electric system on your home just keeps falling and falling. Let’s take a look at some data and then ask if it’s time to abandon energy efficiency.

2 new studies on the cost of solar

In August I saw that Lawrence Berkeley National Laboratory (LBNL) had published a study showing that the cost of solar has fallen to about half of what it was in 2010. The graph below shows the data. 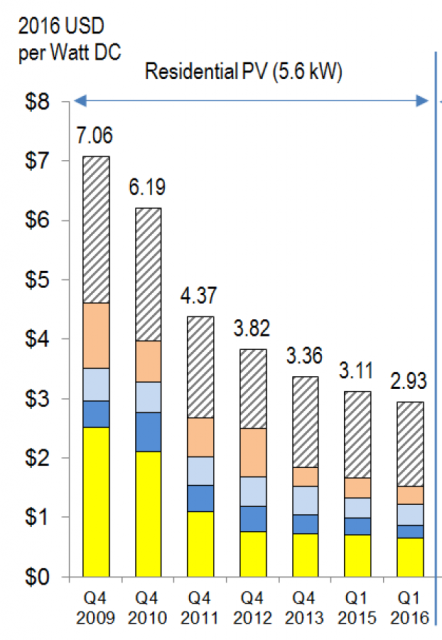 Two weeks ago I received an email from the National Renewable Energy Lab (NREL) with word of another study on the falling cost of solar. This one, titled U.S. Solar Photovoltaic System Cost Benchmark: Q1 2016 (pdf),  includes the first quarter of 2016. The graph at right displays some of the data.

Their report shows the costs for other sectors, too, but here I just posted the graph for residential solar. The LBNL report shows an average of about $4/watt in 2015. The NREL report shows $2.93/watt for the first quarter of this year.

These numbers are great. I’ve been a solar enthusiast for a long time, and I recall the days — not that long ago actually — when everyone was saying, “Solar will really take off when we can get the production up and the cost down.” The number I remember as the threshold was a dollar per watt, but that was just for the PV modules themselves. As you can see above, we hit that mark four years ago in 2012.

You might think it’s time to rush out and buy that solar electric system you’ve always wanted. But…

Is solar our best investment?

Yes, solar electricity is absolutely a good thing. Don’t get me wrong. We need to keep it coming and keep those costs falling. David Roberts wrote at Vox recently, we need electrify everything and clean up our electricity. That’s not a bad idea.

Having said that, I now have to turn your attention to another aspect of cost. The costs noted above are first costs, the cost to install those solar electric systems. Let’s take a look at the cost of producing electricity now.

The American Council for an Energy Efficient Economy (ACEEE) does a lot of great work to promote energy efficiency. In an article titled Solar and Energy Efficiency Need to Work Together, they wrote about a recent analysis they’ve done of the cost per kilowatt-hour (kWh) of solar and efficiency. Here are their main results: 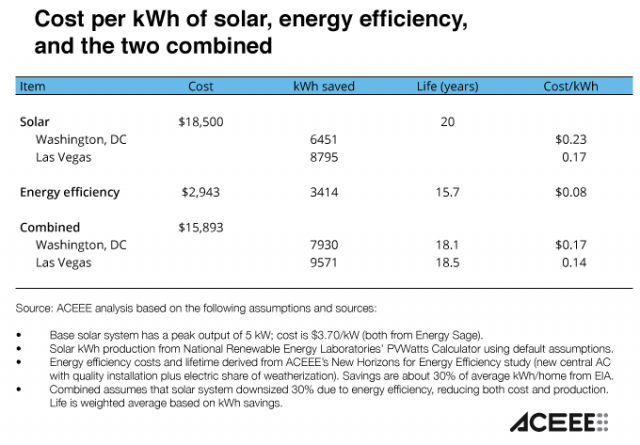 They found that it’s cheaper to save a kilowatt-hour than to generate a kilowatt-hour. But are their numbers realistic? As a former home performance contractor myself, I saw the cost of $2,943 and energy savings of 3,414 kWh and had suspicions. When I looked at the 230 page paper detailing the analysis, I saw that they’re talking about incremental costs. That makes more sense.

Where the Solar Bargains Are

Why North America Needs Its Own Passive House Standard

An Introduction to the Duck Curve

You don’t have to buy their numbers if you don’t believe them, though. There are other reasons to support energy efficiency even if it costs more.

Other reasons to do efficiency first

Here’s the thing. The battle between solar and efficiency isn’t a battle at all. They need to be working together. Yes, we need solar energy. But we can’t forget about energy efficiency just because the installed cost of solar has fallen so much. They need to work together.

PHIUS’s Passive House standard does this. After moving away from arbitrary energy reduction targets, the program now has optimized targets for different climates. It doesn’t make sense to keep adding more and more insulation when you’ve gone past the point where it’s more cost-effective to put PV on the roof.

Another problem that’s starting to crop up is this thing called the duck curve. Solar electricity floods the grid in the afternoon and then creates a huge problem in the evening when the traditional generation sources have to ramp up way faster than they’re currently capable. Greater energy efficiency, along with more west-facing PV, can solve that problem.

And there’s one final argument in favor of energy efficiency. Electric utilities are becoming more and more hostile to solar. Net metering and fair prices for your solar-generated electricity are getting harder to find. Have you paid attention to what your utility is doing there?

So, yeah, solar energy has sex appeal. But a comprehensive energy strategy includes lots of energy efficiency, too.