This is the third of four posts delving into the anatomy of high-performance wall assemblies, beginning with the Karuna House in Oregon. This week’s post explains our approach at the Glasswood Passive House Retrofit.

As a Passive House retrofit project (the first such effort on a commercial building in North America), Glasswood presented unique opportunities and challenges to solve for its high-performance wall assembly design. Because code already required new exterior insulation, structural sheathing, and added fire resistance, the extra effort to attain Passive House certification — air sealing and thicker insulation — was modest. But the team did need to figure out what to do with the existing stud wall. 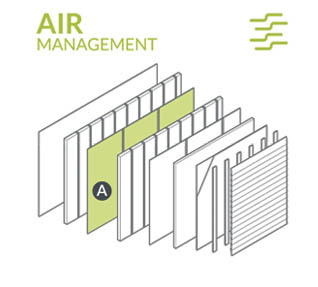 The air barrier for the project is a layer of OSB with taped seams (A), sandwiched between the existing 2Ã—4 stud wall and a new 2Ã—4 wall built immediately inboard. This location protects the air barrier from inadvertent occupant damage (nail holes from hanging artwork, for example) on into the future. 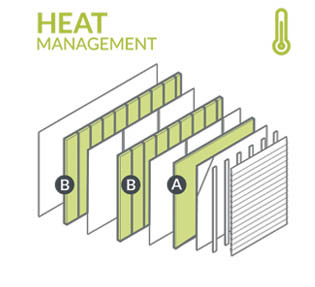 The two 2Ã—4 stud walls (B) are filled with high-density cellulose insulation for a combined center of cavity insulative value of R-26. Two inches of continuous EPS foam insulation (A) adds another R-9 to the assembly, and is only modestly thicker than the exterior insulation required by code. The sum of these three layers of insulation, plus sheet goods and air films, is R-33 (whole wall) or R-39 (center of cavity). 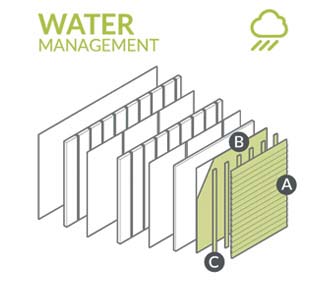 The Hardie siding (A) provides the first line of defense from water intrusion, with a rainscreen cavity (C) behind that allowing water to drain away. A layer of 60-minute building paper (B) provides the next line of defense, while a continuous layer of DensGlass sheathing immediately outboard of the EPS serves as the final water barrier and adds code-required fire resistance to the assembly. 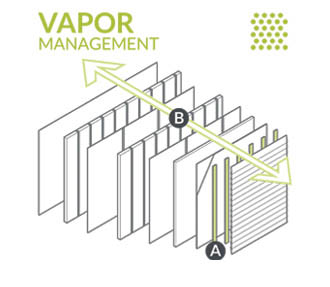 Both the OSB and EPS are vapor retarders, making the assembly semi-vapor permeable in both directions (B). The EPS warms the structural plywood sheathing so that moisture remains in vapor form and can diffuse out of the assembly harmlessly. The ventilated rainscreen cavity (A) adds modest drying capacity to this semi-permeable assembly, but its main purpose in this context is to dry the cladding and facilitate drainage of bulk water.

A little extra insulation, a second stud wall, and a bit of attention to detail on air sealing brought a code-required envelope retrofit into Ã¼ber-efficient Passive House territory.

Next: The grand finale in our Evolution of Enclosure wall assembly series covers the Madrona Passive House. All four analyses are part of our building science exhibit, “Evolution of Enclosure,” that recently completed a 5-week showing at AIA Portland’s Center for Architecture.

Zack Semke is the manager of business development at Hammer & Hand, a company specializing in high-performance building with offices in Washington and Oregon.