How to Detect an Internet Solar Energy Scam

If it sounds too good to be true, it probably is

All I was trying to do was find some sports scores on Yahoo the other day when I saw it. I don’t go looking for this stuff, and when I do see it, I try to ignore it. But this one clotheslined me with an unfair term.

That’s the ad in question to the right. Have you seen it? I probably shouldn’t tell you the name of the website (powerfreedom.com), but the kryptonite term that made my fingers go apoplectic was “free energy.” Seeing it capitalized intensified the effect. And the photo! Is that a diseased wireless router robot surrendering its secrets to me?

Of course I had to click. I willingly undertook the pain and agony of going in there so you don’t have to. Can’t you see? If not for me, how would you know that you’re about to be eaten alive by patent trolls while you sleep, that you’re making terrible mistakes with your garage, or that the USGBC wants to force you to live in an all-glass, LEED-certified home. (OK, only two of those are real threats; one was an April Fool’s Day joke.)

Because I do a lot of writing and my underlying goal is for it to help my business, I read stuff about copywriting. Writing copy to sell stuff online is a huge industry, but the basic principles have been known for a long time. Copywriters have a lot of tricks to get your attention and to make you buy, but not all of them follow the advice of Peter Parker (a.k.a. Spiderman): “With great power comes great responsibility.”

No, some will use that power to exploit the fear and ignorance of those whose money they want. Without investing much of their own money, they’ll create a website that preys on common weaknesses. The first thing they have to do, though, is just get you over there. Hence the alluring title in that ad: “Power Companies Hate This!”

Two things immediately jump out at me here. First, they’ve got a secret they’re willing to share with you, and it’s one that a powerful entity doesn’t want you to have. Second, the word “this” in a headline or e-mail subject pulls people in. Since I first read about “this” in a copywriting book, I’ve watched my own reactions, and it does indeed work. When you see that word, your mind immediately wants to know what the “this” is.

A video full of lies, half-truths, and distortions

Once on the website, I found a video that started automatically. The voice of someone who said his name is David Bradley then started telling about all the “thieves, crooks, and liars” who were stealing from me and my family every month when I pay my electricity bill. And he promised to give me a way to beat them “in the next 7 minutes.” Makes you think the video’s going to be only 7 minutes long, doesn’t it? 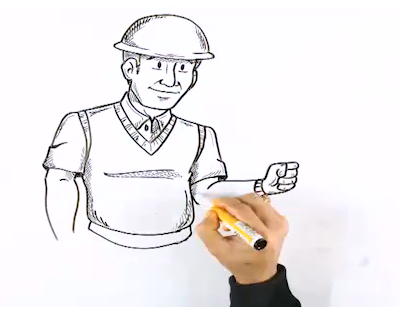 The video used a method that was popular in informational videos a few years ago. An artist drew it all out while Mr. Bradley told me how I was being ripped off not only by the power company but also by solar energy companies that wanted to sell me equipment at grossly inflated prices and send a technician to install it for the ridiculous rate of $50 per hour. I’ve seen some educational videos done with this method, and they were great. Now I’ll always think “scam” when I see this technique in the future. 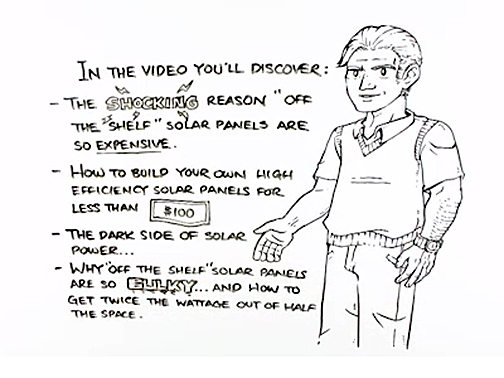 Everything about this video screamed “scam”:

Oh, yeah. That 7-minute video stretched out past 45 minutes by the time it finally stopped. Even then, they had more to tell me when I tried to click away but instead responded positively to their appeal not to leave.

As far as I can tell, Mr. Bradley and his team are selling manuals and videos to help you build your own solar energy system and wind turbine. He also mentioned something that I’m pretty sure is a power factor correction device. I’m guessing you’ll have to build that, too, but don’t bother; it won’t help you. So, for only $47, you can buy his information for stuff that you probably can’t build, and if you do, it almost certainly won’t work as advertised.

I’m curious to know what his instructions are for building your own “super efficient solar panels,” especially since he say it “costs 1/10th of pre-fab panels.” You’re certainly not going to be able to make your own photovoltaic cells out of silicon. I can’t imagine that he’s going to tell you to buy individual cells either, and then wire them up yourself into homemade modules, complete with frame and glass cover for protection. So he’s probably just going to tell you about how to find inexpensive modules and components and put the whole system together yourself. A subscription to Home Power magazine would be a much better investment.

The bottom line on his solar panel claim is that it’s just not possible. No one can make their own solar cells at home. It requires laboratory “clean rooms” and equipment more expensive than any homeowner trying to cut their electric bills can afford. It requires a deep understanding of semiconductors and electrical circuits that few homeowners possess. And wiring up already-made cells won’t be anywhere near cost-effective, or within the skill level of most of the people that this website is targeting.

Here’s another clue that Mr. Bradley either doesn’t really know what he’s talking about or is a sneaky liar. At one point, he said that solar panels produce just as much electricity on a bright winter day as they do during the height of summer. Although the lower temperatures of winter can make photovoltaics more efficient, the incident solar radiation (insolation) is lower because the sunlight has to travel further through the atmosphere, and there are few daylight hours. 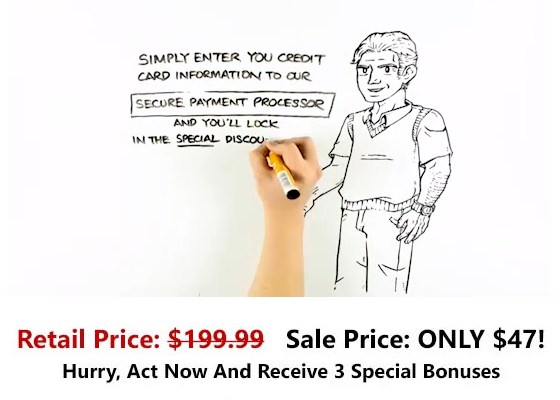 Is Mr. Bradley trying to be the Kevin Trudeau of solar energy?

If you’re a logical, scientific-minded person, it’s easy to see that websites and videos like this are set up only to extract money from people who fall for the emotional pitch, who don’t know enough about the technical issues, or who just have more money than sense. Perhaps Mr. Bradley has been taking lessons from the master of this field, Kevin Trudeau, who made his name and his fortune with television infomercials.

The good news is that Kevin Trudeau owes the Federal Trade Commission $37.6 million in fines. His companies have been seized and his assets frozen. And he’s just been sentenced to 10 years in prison.

The bad news is that my Mega Memory (one of Trudeau’s early scams) didn’t hold out long enough, and I wasted $47.

Wait, no, that’s not it. The real bad news is that I didn’t fork over my credit card information, so now I’m consigned to: 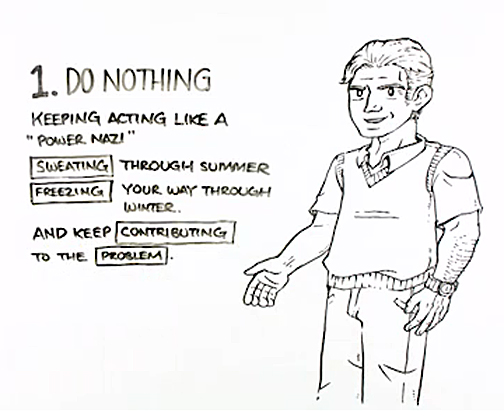 Or so Mr. David Bradley and his Power Freedom scam would have you believe.