Installing Windows in a Minnesota House

This is the third installment of a blog series by architect Elden Lindamood about the design and construction of his own home. The first installment was called A Low-Energy House for Northern Minnesota.

The house is coming right along, but not without a few adjustments. The nailbase (exterior insulation) panels were installed on the walls without too many hitches. I’ll share some thoughts on that process first, and then move on to windows.

Our firm has designed three houses using 8-inch nailbase panels over a structural wood cavity wall, including my own house. We have had three different builders try the system using two different panel manufacturer’s products. We hosted a “debriefing” session at our office to get feedback from the builders and to ask, “Is this something that we should keep doing?”

All three builders agreed that the panels were time-consuming to install. This was primarily due to the time and difficulty in cutting each of the panels. There was a bit of a learning curve, but even after some time, they were still just a bit cumbersome to cut and install. It was agreed that if the panels could come from the SIP manufacturer pre-cut and numbered, like a full SIP house would be, that it would save considerable time and hassle. It would also save a considerable mess and quantity of jobsite waste. When you cut all the openings out of 4’ x 8’ sheets of foam and OSB, you are left with a large number of thick EPS chunks that ultimately go to the landfill.

Also, as much as you can try to contain all the little EPS balls that escape during cutting, they will blow around and stick all over you with tenacious static charges. They will be a part of my landscaping for many years to come.

Installing Windows In a Foam-Sheathed Wall

Where Does the Housewrap Go?

An Alternative to Wood Window Bucks

A Low-Energy House for Northern Minnesota

Foundation and Nailbase Details for a Minnesota House

Relative Humidity and Makeup Air at a Tight Minnesota House

A Follow-up From Northern Minnesota

I discussed these issues with my panel manufacturer. He said that their equipment was not really set up to do pre-cut and numbered nailbase panels, and that on-site cutting and fitting is pretty much the only option.

He did say that they have avenues for the waste generated with their SIP products, which include compressing and recycling the EPS remnants. When I asked if I could bring him the nailbase scraps to be recycled, he said, “Sure thing.” Another option, of course, would be to install full SIPs over a wood-framed wall, but I’d have to think hard on whether that would make any sense whatsoever.

We designed for “outie” windows, with the drainage plane at the exterior face of the nailbase panels (which I’ll get to more below), but that required the exterior panels to be in place before the windows could go in. This delayed window installation, and subsequently interior drying in. It would be nice to have the option of enclosing the structure before the exterior nailbase panels go up by devising different window details and/or locations.

One builder that joined our discussion used a different panel manufacturer who offered the panels in longer lengths. My builder had to piece together panels to cover the 9-foot-high exterior walls with 8-foot panels, which as mentioned above was both messy and time consuming. It certainly would have saved time to be able to get 9-foot or 10-foot panels for my house.

The builder who was able to get 10-foot panels from his manufacturer was also very happy with the quality of the panels and seems to have experienced less cupping and no issues with the OSB skins being out of square with the EPS base material. Knowing what I know now, I’d pay more for larger panels because it would save a considerable amount of time and mess.

The houses are all tight

At the end of the discussion, all of the builders said they liked the concept, and liked the mid-wall air barrier and open interior service cavity aspects of the assembly. None of them said, “Never do that again,” but it was good to hear the things they’d like to see improvements on if we do opt for this wall system on future projects.

Incidentally, all three houses had really, really good blower door test results (well below 1 ach50), which is a testament to the concept also. My house, to brag a little, tested at 58 cfm50, or 0.23 ach50, or 0.012 cfm50/SSF. (That was pre-drywall, but also pre-mechanical penetrations.)

As mentioned previously, I wanted to use “outie” windows. I like the simplicity of the drainage plane, and the ease of installing windows with nailing fins. I also like the deep window stools, and I don’t really care about the incremental energy benefits of “innies”. Really the only question for me in this installation is that of window support and attachment.

My initial window details called for a continuous wood buck around the window. We typically make these bucks out of plywood, and they are essentially cantilevered out from the framed structural wall, eliminating, or reducing anyway, the weight bearing on the nailbase panel below the window. One of our builders uses 1 1/8-inch plywood for his bucks so that he has enough “meat” to hit with the fasteners through the nailing fins. You then install your nailbase panels up to the buck, leaving a small gap to be filled with canned spray foam to seal it all together. Of course the plywood buck would be a thermal bridge, but I tend not to get quite as neurotic about those things as some do.

The original window detail that I provided the builder are shown in Image #2 (at the bottom of the page). After a few rounds of discussions with my builder, we reached the following conclusions and changed the details.

So what we settled on was a double 3/4-inch plywood sill, cantilevered out from the framed rough opening. This sill would extend to the face of the nailbase’s OSB skin, and directly bear on the OSB at its extreme edge. The revised window detail drawing that resulted from conversations with my builder is shown in Image #3, below.

I am guessing, in a completely unscientific manner, that 75% or more of the weight is transferred back to the framed rough opening sill by the plywood sill plate, and maybe 25% of the weight is carried by the nailbase panel skin. Given that the OSB panels are approved to carry fiber-cement siding, and I’d be using cedar siding, I was satisfied that we were okay with that.

It should be noted that I may not have arrived at that conclusion if this were a house for a client, but I was willing to take the risk knowing I wouldn’t sue myself if things started to move, and even if I had to take things apart to retrofit a stronger sill support, it could be done. Also, if there were much larger and heavier window units, I might have stuck with the original full buck detail. 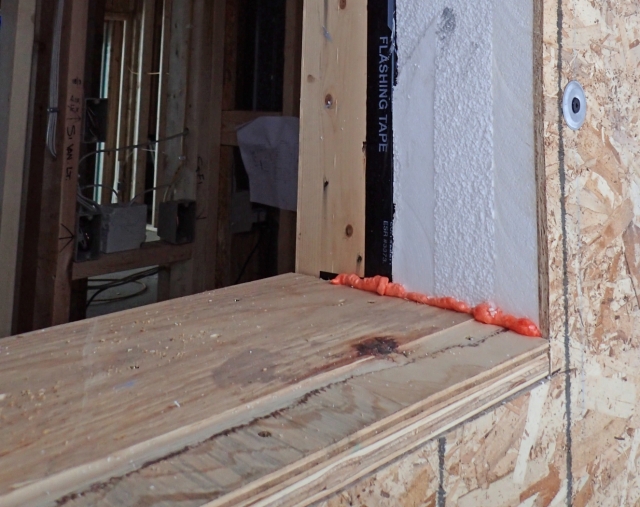 The photo at right shows a window rough opening. The double plywood sill is in place, screwed and glued (and sealed) back into the framed opening. The builder ground a bevel and small back dam on the outer face of each sill. The black line is the Zip sheathing tape that turns from the face of the wall back into the framed opening. The nailbase panels are cut to the window’s R.O. size on the jamb and head. The orange foam sealed the plywood sill to the adjacent nailbase panel at the joint. 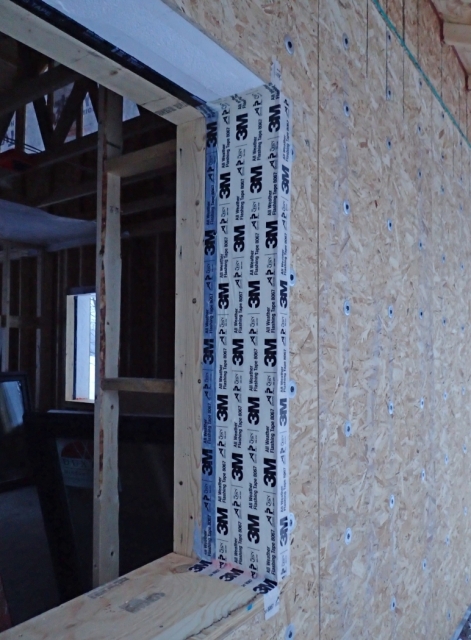 All Weather Flashing Tape was used to bridge the gap from the plane of the window frame back to the mid-wall air barrier. The builder did a number of experiments to ensure, for instance, that the 3M tape would stick well to the Zip sheathing tape. This layer’s primary function is an air barrier, but in a worst case scenario it may drain water too. It was installed on each jamb, and across the window head. 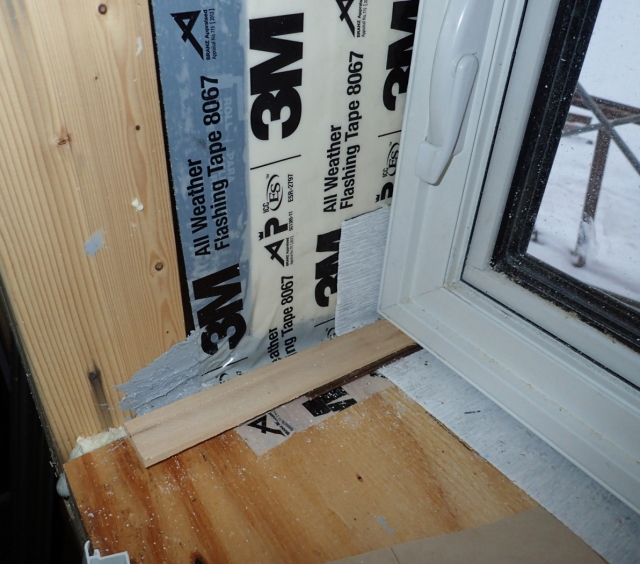 This is an interior photo showing the FlexWrap sill flashing. Yes, the jamb flashing should technically lap over it, not under it, but a few things dictated this assembly. It was really cold, and the FlexWrap wasn’t especially sticky, even using a heat gun to seat it. The FlexWrap stuck well to the 3M tape, but the 3M tape did not stick well to the textured surface of the FlexWrap, so in the name of maintaining the airtightness at the joint it made more sense to lap it as shown. Also, as you’ll see in subsequent photos, there are numerous additional exterior lapping details that should, theoretically, prevent water from ever getting to this lap. Even if it did, the FlexWrap would need to lose its bond with the 3M tape to let any bulk water in and onto the plywood sill. 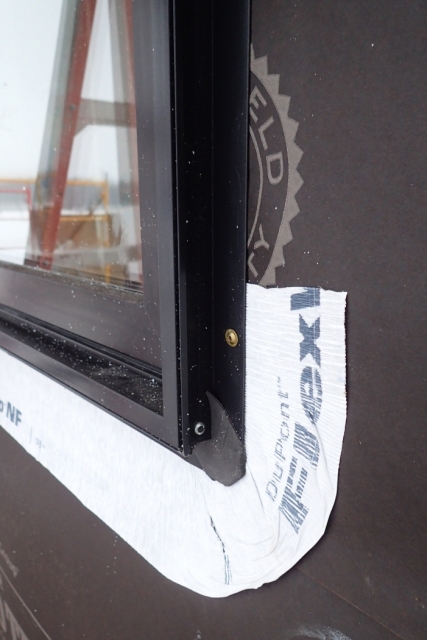 On the exterior, the JumboTex building paper laps over the 3M jamb flashing tape. The FlexWrap was then installed to lap over the JumboTex. Then the window’s nailing fin was installed over that. 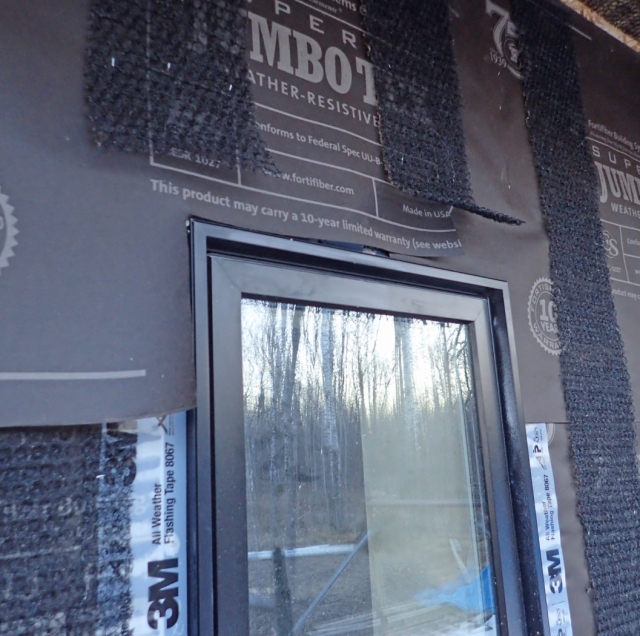 The subsequent layers of JumboTex are installed to lap over the 3M flashing layer. 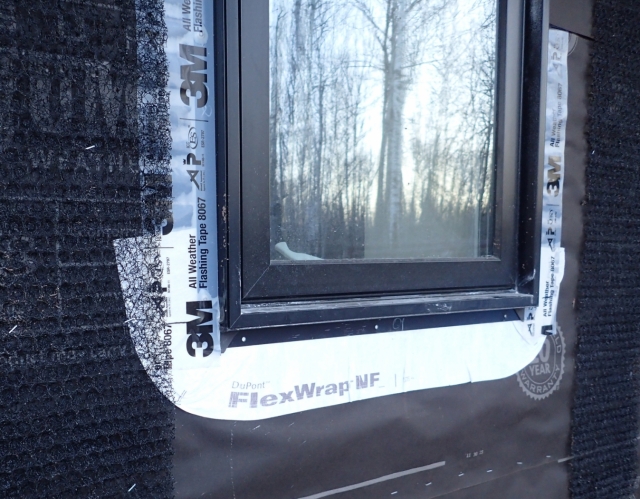 Nylon matrix strips are installed to create the drainage gap behind the siding. The lapping may not be “ideal” in some regards, but it is sufficient to allow me to sleep at night. 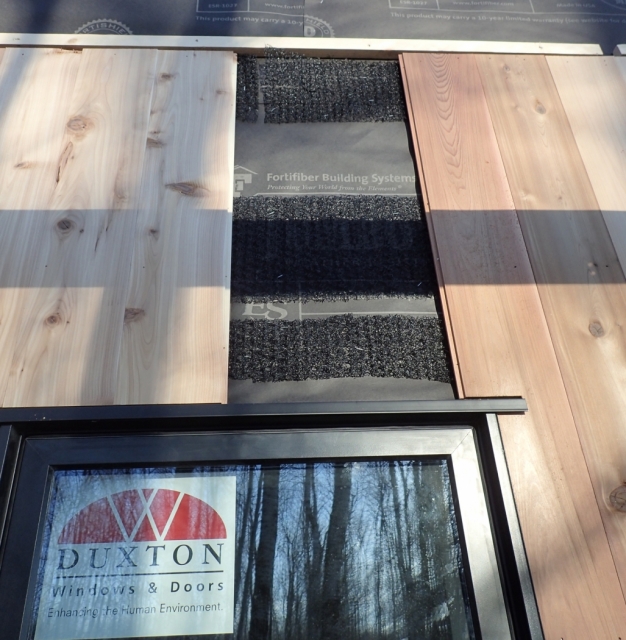 A metal head flashing was installed at the top of the window, lapped behind the JumboTex and drainage matrix. I detailed the flashing to extend a few inches past the window mainly for aesthetic reasons. The house has a modern aesthetic with no window trim, and I thought this would be a nice, not too fussy look. A sill flashing was also installed to divert water that runs off the window frame out to the face of the wall. 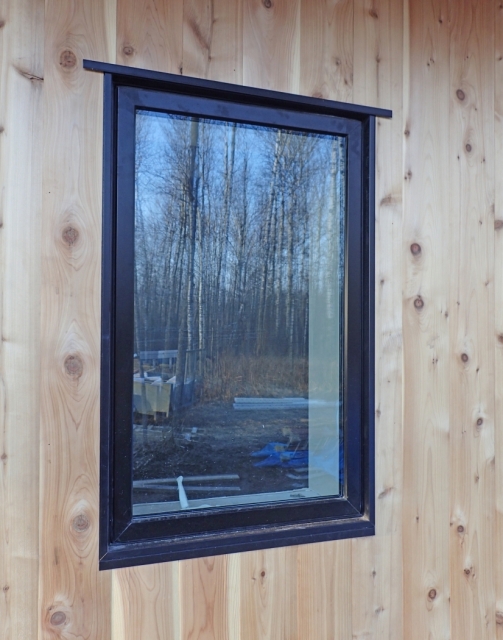 A finished window. My plan is to stain the siding black, but I really like the contrast of the unfinished siding against the black windows. Hmm…

Elden Lindamood is an architect with Wagner Zaun Architecture in Duluth, Minnesota.