Interior Paint and a Back Porch for the Potwine Passivhaus

As they set out to build a single-family Passivhaus on Potwine Lane in Amherst, Massachusetts, Alexi Arango and LeeAnn Kim asked themselves, “Is it possible to live without burning fossil fuels?” One measure of success would be meeting their goal of net-zero energy performance. This is the twelfth blog in a series.

Since the plumbers and the electricians had to work together to get the water heaters installed, the electrical work was also held up. Given that only one guy, Jeff, was available to do the painting, it took forever. I was pulling my hair out the whole time. The progress was painfully slow, but we still managed to have some exciting moments.

I was glad that the appearance of the outside began to change as the siding went up. I was worried that my neighbors were thinking that I had run out of money. 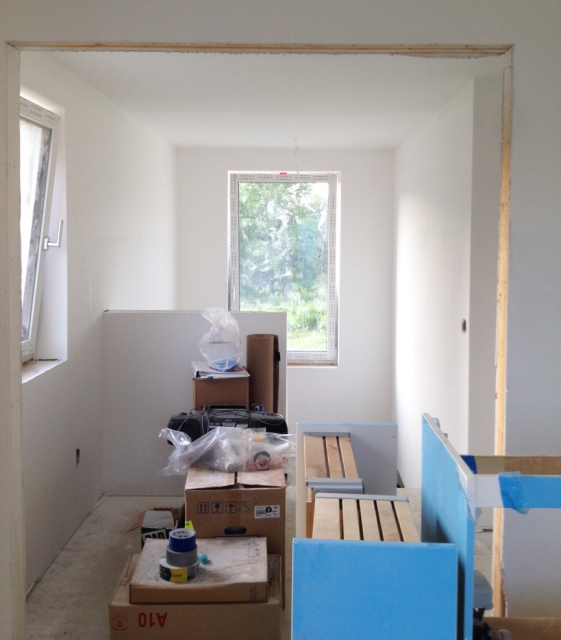 Inside, as soon as the primer went up, you began to get a sense for how bright and wonderful the interior of the home would be. For some reason, covering up the grey drywall with white paint changed the feel in a remarkable way, almost from a dingy prison cell to a wide open modern museum. 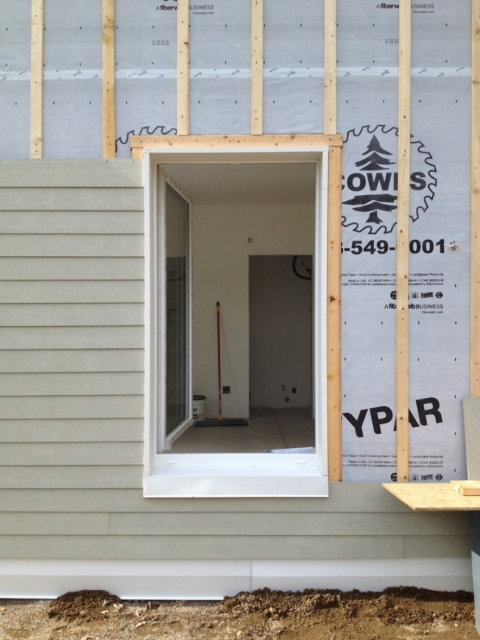 The most exacting siding in the world

There’s something satisfying about siding — so perfectly straight and even. Neighbor Jesse commented that British scientists could calibrate their standard reference length of a meter off of how perfectly the siding is spaced. The drawback is that the siding is taking forever: measure a piece, cut it, try to fit it in place, measure it again, cut it again, try to fit it in place again, repeat. I can’t imagine how this is going to work when they have to climb up and down a ladder for every cut. 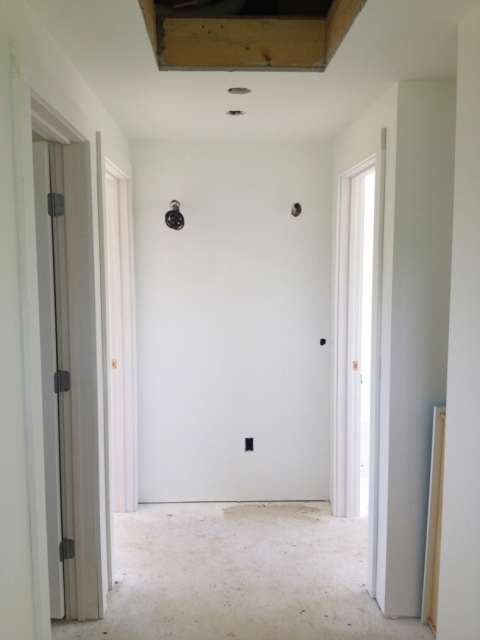 I was feeling busy so I figured I would save myself the trouble and just go with GO Logic’s standard interior color. After all, they are the experts.

Avoid Oxford White at all costs

I knew something was wrong when I saw the paint on the wall, but I waited a day to see how it would look after a second coat. By the time I got a chance to take a look at the color again, the whole upstairs had been painted in the most disturbing tint of white that has ever been observed by any human in the history of humankind. The painter Jeff was crying with the paint brush in his hand, it was that bad. A strange green tint would appear at different angles, under different lighting, and trick you into thinking that the walls were actually green. But then you would look directly at the wall and it would innocently switch to a perfectly white looking white, just to mess with you.

Always put up multiple colors on the wall for comparison

I ran to the paint store and discovered that every single white paint swatch looked exactly the same — no weird green tints, just white versus white versus white. By scrutinizing the colors inside, outside, in the sun, in the shade, I finally arrived at Mountain Peak. For comparison, I also took a can of Butter Pecan, which my parents have at their home. Once the colors were on the wall (below), it was clear that Mountain Peak was perfect, Butter Pecan was slightly too warm and Oxford White was to be avoided at all cost. 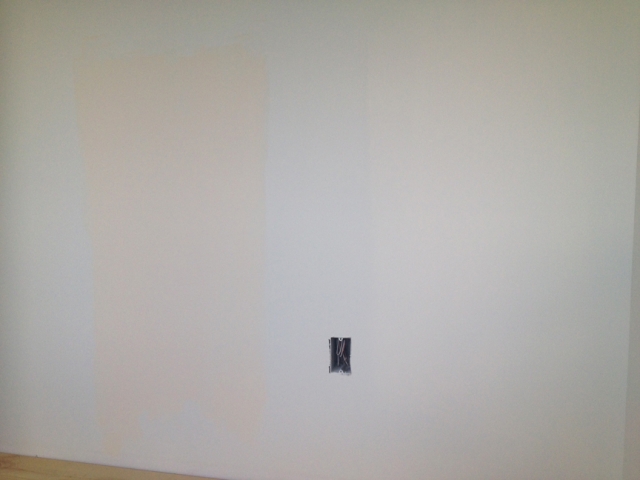 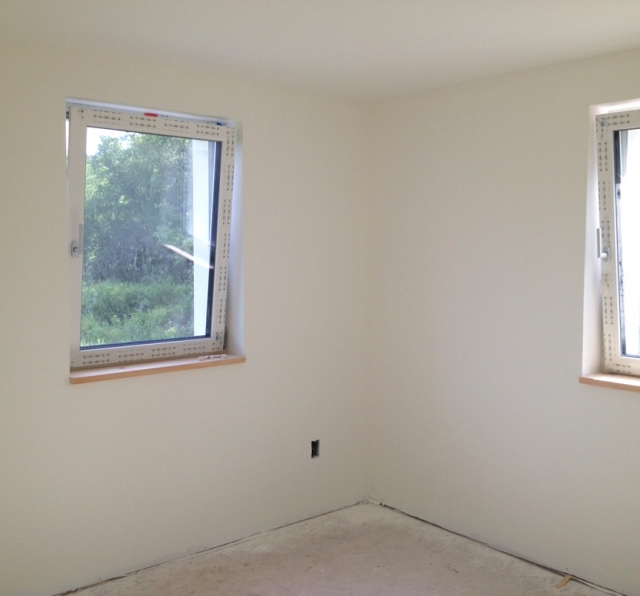 In the end, it worked out, and Mountain Peak turned out to be a wonderfully rich and creamy white, with just enough warmth to make the inside feel welcoming, yet bright enough to make it feel expansive. The lesson learned is that it is a good idea to pick out a set of colors and paint them on the wall before (a) buying all the paint upfront and (b) painting everything before getting feedback on the color.

Always double check that you received the correct item

There was one final lesson to be learned, however. I was super happy with the color choice until I noticed that the smell from the paint upstairs was quite strong. I’ve been extremely careful to avoid finishes that off-gas, and so I specified Ben Moore Natura, a zero-VOC paint. The paint guy gave me all the paint in a box, I paid for it, delivered it to Jeff the painter, took off, and the next time I returned, the upstairs was all painted. Somehow I ended up with the normal paint, not the Natura, and there was nothing I could do about it after the fact. So much for the healthy home thing.

The Potwine Passivhaus Gets Insulation and Drywall

Best back porch ever!

The back porch got started last week. Seemingly added on as an addendum at the last minute, it’s already one of the best features of the home. Most people assume that the main entrance is through the front main windows, but in fact it’s through the back side of the house. Hopefully the wrap-around driveway will clarify this in the future, directing you to the back porch which serves as a visual cue to the entryway.

The wide beams seem like overkill, but, aesthetically, something is so satisfying about their proportions. The porch siding — vertical slats of channel rustic lap siding — also seems like overkill. It is a lot of wood (pine), but it is beautiful, and somehow makes the porch feel like less of an outside space. The beams and the paneling will be coated with a natural sealer and the cedar deck boards will be left to age naturally. 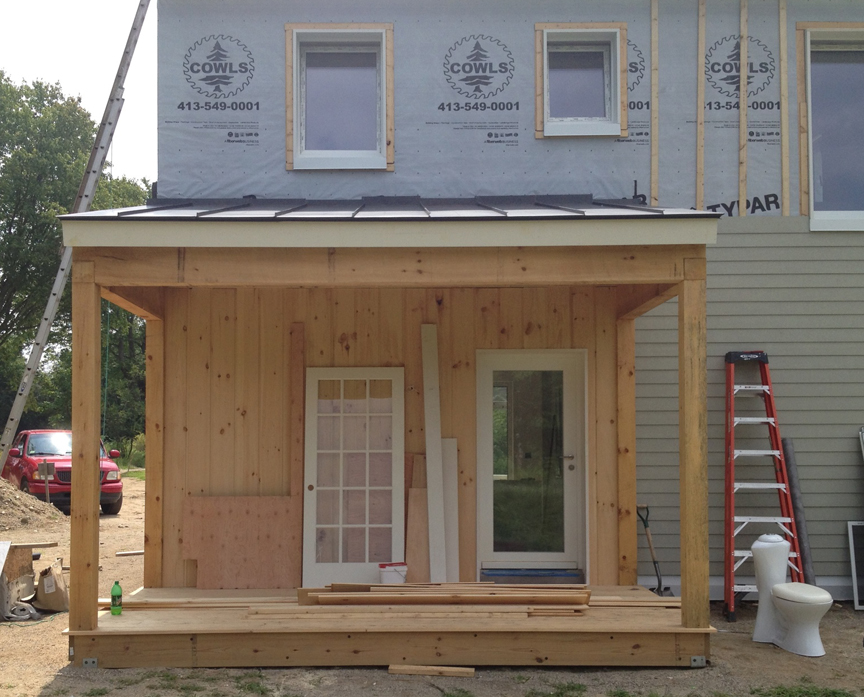 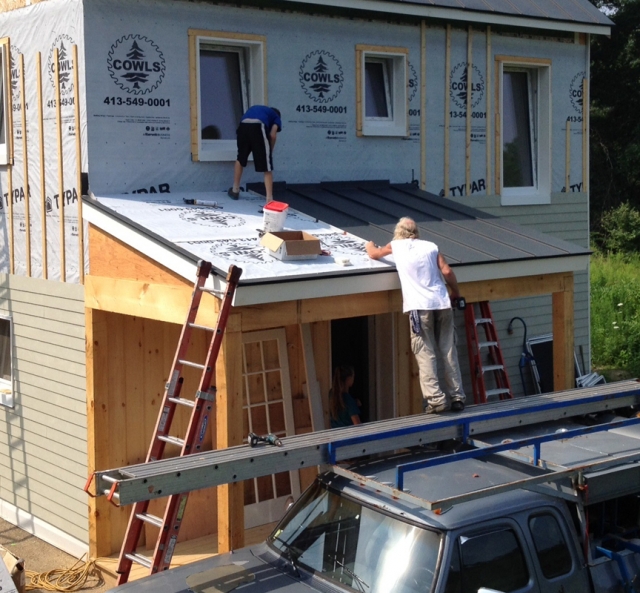 Tim Copinger and his crew stopped by to install the standing seam metal roof on the porch, so I got to see the process up close. The truck in the foreground has a giant machine that produces each metal sheet one by one, supplying them right as the roofers install them. 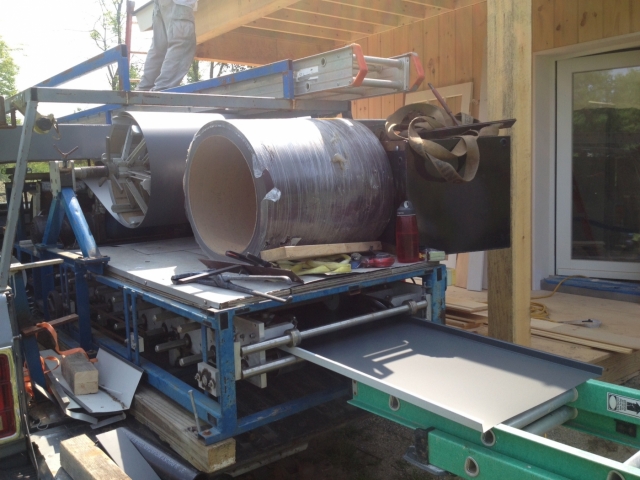 The spool of Galvalume (an aluminum zinc alloy) on top feeds through some sort of mechanism that rolls out the metal sheets, bends up the edges, straightens out the sheets and automatically cuts them to size. It was neat to watch. You can see the flat piece emerging at the bottom right. The seams of each roof panel fit together and conceal a third piece, a clip. The clip fits under the panels and gets nailed to the plywood, and serves to keep the metal panels attached to the roof. Water can’t get through the seams to the clips so there’s no screw hole in the panels themselves to leak or require sealing. It’s a clever system.