A blizzard (a severe snowstorm and sustained winds of over 35 mph) is a challenging weather condition for a minisplit heat pump. Recall how an air-source heat pump works: the outdoor unit has a compressor and a fan that blows air across a coil with refrigerant. In heating mode, the coil is colder than the outdoor air. As air is drawn through the coil, it gives up heat to the coil and leaves the other side colder. The more humid the air (and remember: the warmer the air is, the more moisture it can hold), the more condensation occurring on the coil. At temperatures at or below freezing, that condensation may freeze on the coil, reducing air flow through the coil and heat transfer to the refrigerant.

Heat pumps are designed to sense this type of condition, and periodically operate a defrost cycle, in which the heat pump reverses and uses some energy to melt the frost off the coils. Below is a photo of a Fujitsu condenser with frost building up: 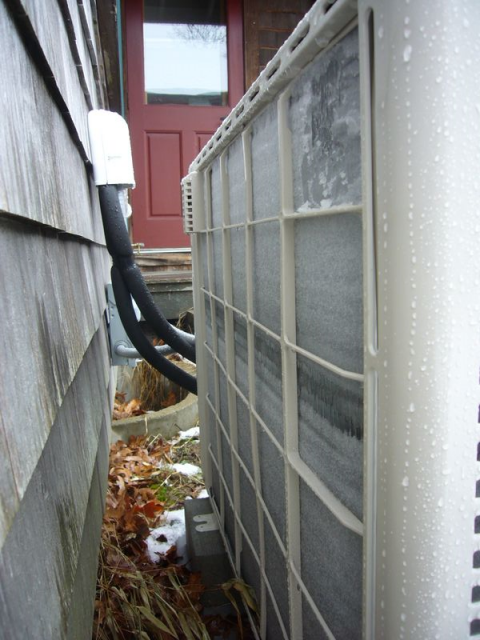 Here’s the same condenser after the defrost cycle:

Here’s a Daikin condenser that I think has a faulty defrost cycle. (The photo below was taken at a house at which South Mountain has installed a solar electric system.) The frost has built up considerably: 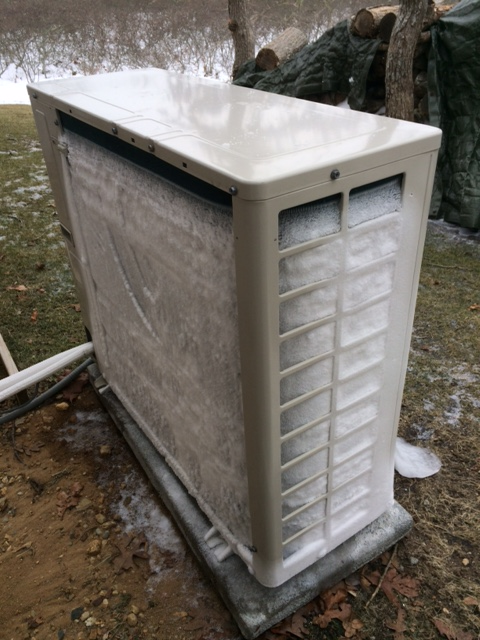 So, the above photo excepted, we’ve been talking about normal conditions, not a blizzard. Image #2 (at the bottom of this article) is a graph showing the power input to the Fujitsu at our house on January 26, 2015, as outdoor temperatures rose and the blizzard began.

Looking for the Best Minisplit Option

Are Seven Heads Better Than Three?

Through about 2:00 p.m., the outdoor temperatures were in the mid-to-upper 20Fs, and the defrost cycles, marked by the dips in power draw, occurred roughly every 4 hours, lasted 4-5 minutes, and drew under 250 watts. Once the storm starts up, outdoor temperatures are right around freezing, and the fine snow is being whipsawed around by the strong winds, which can drive the snow into the coil, coating it and triggering the defrost cycle.

The blizzard becomes a moisture delivery system. The defrost cycles are much more frequent, slightly over once per hour. And the duration rises to 15 minutes or so, with a power draw of 500 watts. Note also that after the defrost cycle the heat pump power draw jumps up to 900 watts or so, whereas before the storm it was running at 450 watts for much of the time.

It appears that the firmware drives the heat pump up to the higher power draw for a certain amount of time after every defrost cycle, and when the cycles are frequent, it never drops down to the “cruising” power draw. So both efficiency and capacity are reduced, because the energy going into defrost isn’t going into the house. You can tell when the defrost cycle occurs because the indoor fan shuts off — otherwise it would be blowing cold air.

The condenser needs clearance beneath it, because the melt from the defrost cycle is going to freeze once it drips down off the condenser, and in the worst case it freezes under the condenser and crushes the lowest row of the coil and the unit is ruined. So it makes sense to raise the condenser above the snow line and keep it under an overhang or roof.

This all becomes more severe if the condenser is actually buried in snow. In the worst case, the heat pump shuts down, and we saw this at a couple of houses here. My own unit is up off the ground, and under a small roof, but the January 26-27 storm came from the northeast and still packed the gap between the house and condenser 40-50% full of snow. We’re considering doing more wall-mounted installations, getting them at least 2 feet off the ground — but architects don’t want to see the condenser(s), so the inclination is to install them low to the ground and behind screening. But this usually makes them more vulnerable.

We’ve been pleased that these seem not to impart vibration to the house, the units must be very well-balanced.

Does this mean that houses heated by minisplit heat pumps, with no back-up heating system, are more vulnerable in bad storms than houses heated by modern fossil fuel burning equipment? Not necessarily — those fuel-burning units have their own issues in storms. Sealed-combustion sidewall vents can be plugged by ice or wind-driven snow, and wind gusts can cause the pressure-sensing switch to shut the units down.

So modern heating systems in general are more twitchy in severe weather than the old atmospherically vented boiler venting into a interior masonry chimney, with a barometric damper. Do we want to go back to that? For a number of reasons, I’d say no. Houses that need that big boiler or furnace are much more likely to freeze up when that unit goes down (say, in a power outage) than a small superinsulated house with a minisplit.

My sense is, get ’em up off the ground, and check them in a bad storm.

Marc Rosenbaum is director of engineering at South Mountain Company on the island of Martha’s Vineyard in Massachusetts. He writes a blog called Thriving on Low Carbon. Marc teaches a 10-week online Zero Net Energy Home Design course as part of NESEA’s Building Energy Master Series. You can test drive his class for free.