Old Hippies Conspire to Save the World

After a visit to Building Energy 13, the annual conference and trade show of the Northeast Sustainable Energy Association, Kevin Ireton reports on the business of energy-efficient home building, deep-energy retrofits, and more

Last week, I drove to Boston for Building Energy 13, the annual conference and trade show of the Northeast Sustainable Energy Association (NESEA). There were nine full-day workshops, 12 half-day workshops, and 60 hour-and-a-half sessions, with 10 going on at any one time. I can’t possibly do justice to the quality of this event, but I can urge you to go next year and to look for more information about this year’s conference on the NESEA website in the coming weeks. You can also check back here at the Green Building Advisor website next month for some videos of the live demo stages at the show. Meanwhile, here are some highlights from my experience.

The economy or the environment? Pick one.

Alex Blumberg, a contributing editor for National Public Radio’s Planet Money and a producer for the public-radio program This American Life, delivered the keynote address, which focused on “the economy versus the environment.” A self-professed “bleeding heart liberal,” Blumberg said he grew up watching nature shows on TV and worries about losing polar bears. He also thinks it’s absurd to pretend that price plays no role in our values. If you want to sort out the true environmentalists from the poseurs, Blumberg suggested, ask this question: Would you sacrifice your family pet to save the last breeding pair of polar bears? He asked for a show of hands, and a surprising number of NESEA members revealed themselves as poseurs.

Blumberg talked about the work of environmental economist Robert O. Mendelsohn, who has spent a lot of time trying to measure the damages to the environment from such things as pollution. He wants to quantify, in economic terms, the benefits of protecting the environment. Among his conclusions, according to Blumberg, is that coal-fired electricity isn’t worth the cost.

From an economic point of view, Blumberg said, the solution to global warming was simple: Put a true price on carbon. But then he quoted a familiar dictum in his field, “Economics simple, politics hard.” According to Blumberg, all the economic solutions to global warming require somewhat enlightened behavior on the part of politicians, which he admitted was difficult to hope for.

Although his talk was depressing, given the mess we’ve made of both our economy and our environment, and the seeming dilemma of having to choose between them, Blumberg was funny and charming. He also ended on a hopeful note by explaining the economist’s definition of efficiency, which he said is basically when someone comes up with something nobody thought of before. (He gave the example of perforations on a legal pad.) “It’s a law,” Blumberg said. “People will always do that. And embedded in that law is this: We have no idea what’s coming.”

If you don’t know Blumberg’s work,  you can listen to “The Giant Pool of Money,” a piece he did on the housing crisis for This American Life. It’s what got him invited to speak at NESEA.

Marjorie Kelly and John Abrams led a session called “Building the Generative Economy,” which focused on transitioning to an economy based less on money and more on people. They began by showing a six-minute video on the inequality of wealth distribution in America:

According to Kelly, “Ownership is the key” to creating a “generative” rather than an “extractive” economy. In her new book, Owning Our Future: The Emerging Ownership Revolution, Kelly profiles companies with alternative ownership models, such as Organic Valley, a dairy in Wisconsin that’s made up of nearly 1,700 family farms. John Abrams, a longtime NESEA member, runs an employee-owned design/build firm on Martha’s Vineyard called South Mountain Company, which is featured in the book.

Timber-framing pioneer Tedd Benson, whose company, Bensonwood, is also employee-owned, was in the audience. In a comment to the group, Benson said his employee owners were “committed as opposed to compliant,” which he stressed is critical in a complex business like home-building, where “the complexity often happens very close to the work.” He summed up the session succinctly when he added, “Owners do great work.”

Bouncing back after the storm

There was much talk about resilient design at the conference. It’s not yet clear to me how resilient design differs from sustainable design, but clearly I’m missing something since Alex Wilson, founder of Building Green and Environmental Building News, just added another progeny by founding the Resilient Design Institute. 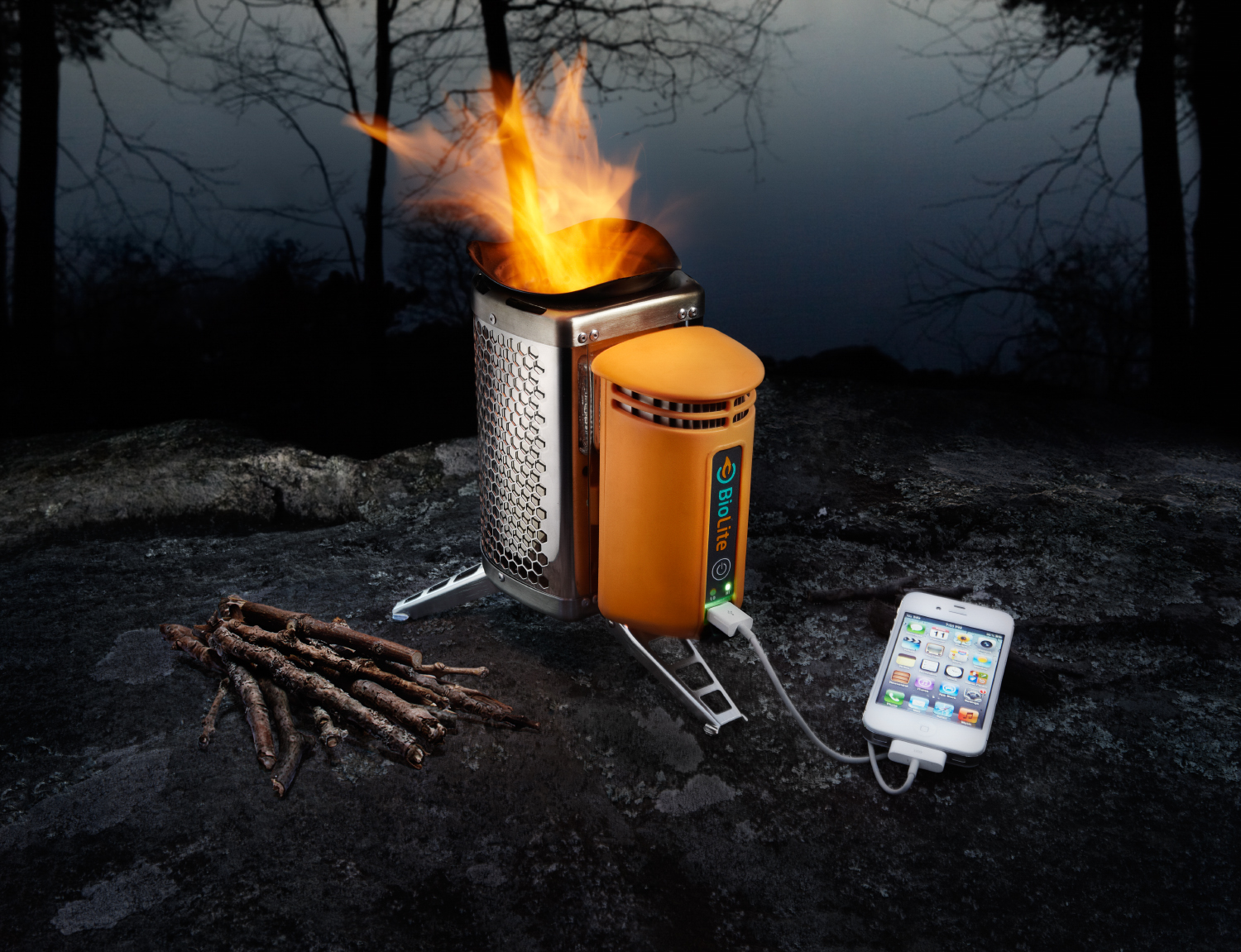 At a session called “The Resilient Home,” Marc Rosenbaum mentioned a couple of interesting products. The first might come in handy the next time a storm knocks out the power to your house. It’s a small camp stove that runs on a handful of twigs, but more important, it has a thermoelectric generator that will recharge your cellphone while you’re cooking dinner.

Most people don’t realize that a photovoltaic system tied into the utility grid won’t provide electricity when the grid goes down. To have power, you would typically need a battery setup in which to store the electricity. But SMA Solar Technology just announced that it will soon offer a grid-tied inverter with an emergency power outlet. With this setup, when the power goes out, you can get electricity from your PV panels. Here’s the catch, though: You get only one 12-amp outlet, and you can use it only if the sun is shining. It won’t run your fridge or your furnace, but it will run a laptop, a phone charger, a light, or a radio.

That’s just one of the quips from Michael Blasnik, who spoke about energy upgrades to a standing-room-only crowd. Blasnik is an energy consultant and numbers cruncher who understands building science. He has done a lot of work for utility companies over the years, trying to measure what works and what doesn’t when it comes to energy efficiency. For example, new windows are probably not going to save you much money “unless your building has a giant light on it that guides ships into the harbor.” Martin Holladay wrote a great blog post about Blasnik after seeing him last year — Energy Modeling Isn’t Very Accurate — as well as a report on Blasnik’s presentation this year at the NESEA conference: Pearls of Wisdom From Recent Conferences.

This session got off to a bad start. I was there to hear about the renovation of the Mallett house, an 1886 cottage in Freeport, Maine. But Peter Troast, who coordinated the project, began by projecting a quote published in Fine Homebuilding magazine. He said that quote had made him very angry. I slid down in my chair. The quote was from a “Taking Issue” essay written by Sally Zimmerman (FHB #203) about superinsulation posing a greater threat to historic houses than teardowns. In truth, he misquoted Sally, but his point was clear. Energy advocates and preservationists have different agendas.

In the end, the energy advocates won (mostly) and performed a deep-energy retrofit by adding foam on the outside (mostly). The folks at Building Science Corp. consulted on the project, and even Joe Lstiburek was amazed by how airtight the renovators made this house. You’ll find many of the session slides here: The Mallet Deep Energy Retrofit, and more about the project here: Facebook page for Mallet Deep Energy Retrofit.

For the first time in the show’s history, there were live demos on the trade-show floor, sponsored by Fine Homebuilding and GreenBuildingAdvisor.com. They focused on insulation and air-sealing, with topics such as “Dense-pack cellulose installation,” “Duct-sealing techniques,” and “Liquid-applied weather-resistant barriers.” I walked by while David Joyce of Synergy Construction was talking about hanging foam on the outside of buildings. He calls it “wrap and strap” and has done more of it than any builder I know. What stopped me in my tracks was that he called the process “fun,” something I’ve never heard another builder say. Look for videos of Joyce’s demo and many others to be posted at the Fine Homebuilding and Green Building Advisor websites soon.