The North American Passive House Network is moving forward with plans for its 7th annual national conference in June. It’s just that no one will be attending in person.

NAPHN leaders announced on Monday that the conference, which had been expected to draw as many as 1000 attendees to New York City, would instead be presented on a virtual platform. Programs will be run in two six-hour windows, from noon until 6 p.m. (Eastern) on June 11 and 12. Virtual house tours will follow on June 13.

The global spread of the COVID-19 virus has disrupted schedules and forced the cancellation of events that would put people in close physical contact. The annual conference of the Northeast Sustainable Energy Association is among the victims, with organizers forced to push back its BuildingEnergy Boston 2020 program from March to August. New York is now the epicenter of the pandemic, with 17,000 cases and 115 deaths reported on March 23, according to Reuters. Those numbers are rising quickly, so the idea of pulling off any kind of a conference there in just 11 weeks looked increasingly doubtful. 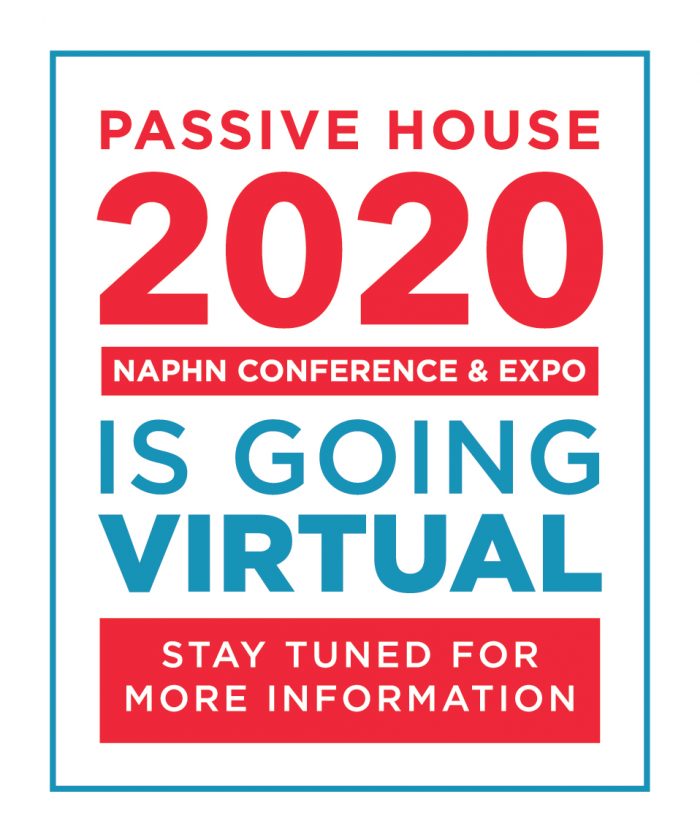 In a news release, NAPHN President Bronwyn Barry said: “We can’t pause if we can help it. It’s a drastically different world today, and we’re working to make our virtual conference a vital source of community support and peer-to-peer knowledge sharing, helping people find a more resilient pathway forward.”

Many details are still being worked out.

“There’s still a lot that hasn’t been firmed up 100% but we made the decision,” Ken Levenson, head of NAPHN’s conference committee, said by telephone. “We felt this was feasible, that we can figure it out. Otherwise we would just run out of time. We felt like there was a narrow window and that we should just make the commitment. There are resources out there. We can make this happen.”

Among the details still to come is the web-based platform that organizers will use. Presentations will be a mix of live and taped talks, but the idea is to use software that allows attendees to have conversations with others, to see each other, and to participate in live Q&A sessions.

Attendees will miss rubbing elbows, but Levenson said program offerings may actually be expanded under the virtual format. Organizers won’t have to work in a meal break, and the time between individual sessions won’t have to be the 15 minutes normally allowed. Workshops that normally would be scheduled in advance of the program will be postponed later into June or July.

Plus, prices are going down. Early-bird tickets will cost $100, down from the $405 originally planned, and the full-ticket price drops from $499 to $150. Because attendees will not have the expensive of travel to New York, Levenson hopes the program will attract more people this year, not less.

“The idea is we’re in a time of pretty acute anxiety, right, with what the future holds,” he said. “We want to make it barrier free for people to come together and share the experience and do this.”

Conference details will be posted at the NAPHN website as they become available.