At the 2018 Building Science Summer Camp, Straube laid out the fundamentals with deep insight and a dose of wit

The 22nd annual Westford Symposium on Building Science (a.k.a. Building Science Summer Camp) happened two weeks ago. And it began with a bang, as Professor John Straube expounded on moisture physics for half a day. I’ve now had the chance to hear him present on mechanical systems for low-load homes (at the 2012 BSC Experts’ Session), air barriers (at the 2016 Air Barrier Association of America conference), and this time on moisture fundamentals. I’m sure there is no one in the world better at explaining the fundamentals of building science, making it relevant to what we do with buildings, and inserting a healthy dose of Straubisms to make you laugh while you learn from the master.

If you’ve ever heard Professor Straube speak, you know he can pack a lot into a short time. Since he spent half a day on moisture physics, there’s no way I can give you thorough report on it in one little blog article. I’ll do what I can to cover the parts I found most interesting and informative. Then you can go download the slides from his presentation to see what else he covered.

Here’s the outline he presented:

The first major concept he covered was the moisture balance. The diagram below shows the three basic processes of wetting, drying, and storage. 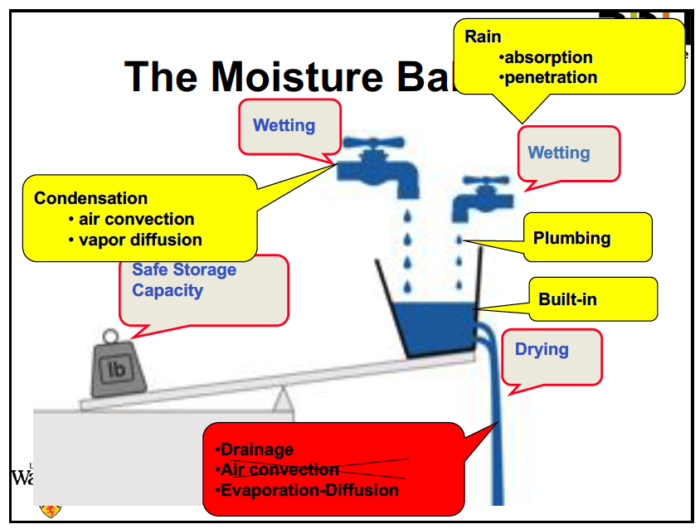 The two types of wetting are by water vapor condensing or adsorbing and by liquid water getting in. The yellow and red boxes show the sources or mechanisms for wetting and drying, but I don’t recall why he crossed out air convection as a drying mechanism and apparently didn’t take notes on that part either. Air convection is certainly a drying mechanism, depending on what the relative moisture levels are, and he discussed how that happens with both intentional and unintentional air convection.

From there he went to the polarity of the water molecule and how that affects the various phases of water. That, of course, led to psychrometrics and phase changes and the fourth state of water: adsorbed water.

And here he shed some light on what many find confusing when they first learn about adsorption. The difference between adsorbed water and absorbed water, Straube said, lies in where the water came from. When water vapor attaches itself to the surfaces of porous materials, that’s adsorption. When liquid water gets into the pores of a material, that’s absorption.

One interesting property of liquid water you may not be aware of is that it’s not just a continuous mass of water molecules. The water molecules group themselves into large clusters. Because water molecules are polar, having one end with a net positive charge and another end with a net negative charge, they attract each other, positive to negative and vice versa. In the liquid phase, the molecules constantly realign themselves because of thermal motion. But even with the constant shifting of allegiances, molecules cluster into groups, with the size of the clusters related to temperature. 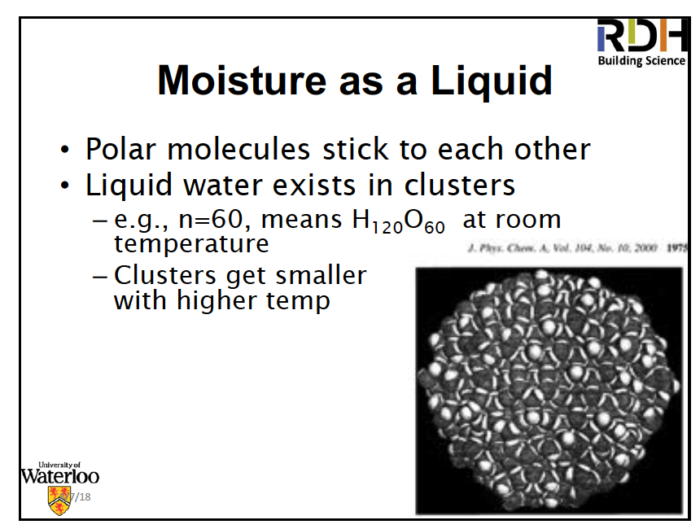 This is not only interesting by itself, it also has application in building science. In a material like spun-bonded polyolefin, the stuff that Tyvek house wrap is made of, liquid water has trouble going through the pores because of the size of the water clusters.

Straube spent quite a bit of time discussing material wetness. He began by introducing adsorption isotherms (often called sorption isotherms), which plot the moisture content of a porous material as a function of the relative humidity around the material. This is all done at constant temperature, hence the “isotherm” part of the name.

First, percent moisture content (MC) is relative to dry weight of the material. That’s why concrete is ~5% MC at ~95% RH, which is equivalent to the moisture content in wood when it’s at ~17% MC.

So now take a look at the sorption isotherm below. He didn’t say what the material is but sorption isotherms mostly have that same general shape. They also have hysteresis, meaning the moisture content is different as you dry it out than it was as you were wetting it. 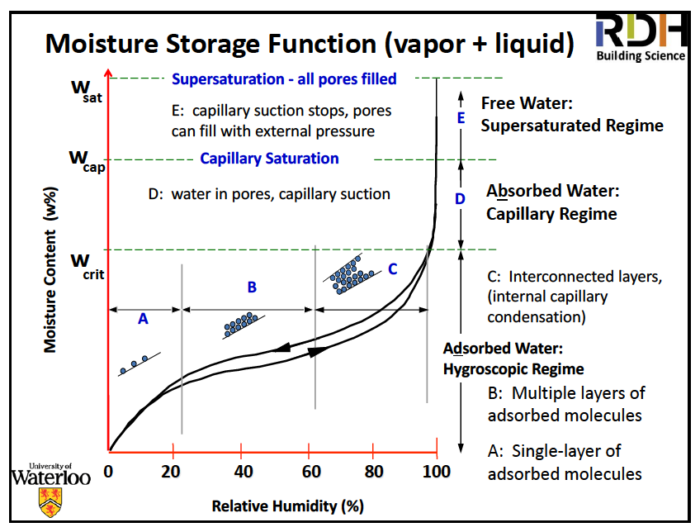 The other thing to notice on that diagram is the three moisture regions:

These regions are significant because of the different things that happen in them.

Professor Straube brought all this fundamental moisture physics home with a discussion of concrete and wood, two materials used occasionally in buildings. (And when I say “occasionally,” I mean in almost every building.) He talked about porosity and permeability and how those properties affect the ability of a material get wet, store water, change size, deform, and dry out.

Concrete is kind of boring because it’s generally an isotropic material. Wood on the other hand is anisotropic. Isotropic materials are the same no matter which direction you look. Anisotropic behave differently when you measure a property in different directions.

Wood is like the Internet, a series of tubes. Water moves easily in the direction of the tubes, not so easily across the tubes. That’s why wood is a good material to make boats and casks out of. Shrinkage of wood begins when its moisture content drops below about 28%. Once it dries out, it can swell again through adsorption or absorption of more water. 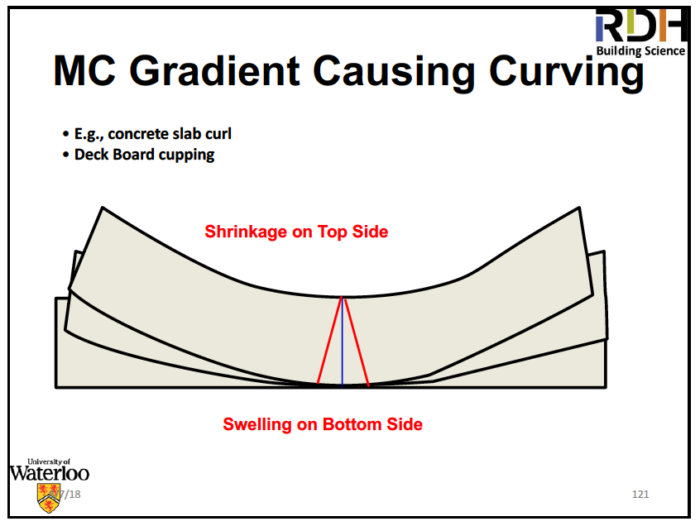 Shrinking and swelling of wood as it dries out and gets wet can be a problem if you don’t manage it properly. Straube’s advice in this area is the following:

3. For shrinkage and swelling:

As Dr. Joe Lstiburek says, “Wood is good… but strange.”

Some of the best Straubisms

Of course, no talk by Dr. Straube is complete without a healthy dose of Straubisms sprinkled throughout the talk. Here are the ones I managed to record:

“If you meant elephant and you said rhinoceros, it’s not the same thing.” (Part of his opening lesson on the importance of language.)

“Nails make about one hole per nail.” (Because sometimes they make more than one hole.)

“[Before air conditioning in Houston], the technique they used for human comfort is a concept we call suffering.”

“Like Joe says, even the dumbest of the three little pigs didn’t build his house out of paper. Then all the wolf has to do is come over and lift his leg.”

“Our children are precious so we must create as much mold as possible [in schools].”

He’s quite the entertainer.

The material Professor Straube covered in this half-day presentation could easily be expanded into a semester-long course on moisture physics. He covered much more than I’ve written about here, as you can tell if you download the slides. There’s a heck of a lot there and if you want to go further without taking such a course, a good alternative would be to study the book Water In Buildings by Bill Rose.

After three and half hours on that Monday morning in early August, Straube concluded thus:

“Moisture is worth understanding.”

“Porous materials are common… and much more porous than you think.”