Are the recommendations from a paper published in 2010 still valid?

To reduce energy use, green builders often install above-code levels of insulation. Thick insulation is expensive, however, so it’s sometimes hard to know how much insulation is optimal.

To help guide builders wrestling with R-value questions, I wrote an article in May 2016 (“How Much Insulation Is Too Much?”) reporting on R-value recommendations from three energy experts: David White, Marc Rosenbaum, and Rachel Wagner.

A few years earlier, building scientists John Straube and Joseph Lstiburek (along with several other co-authors) addressed the same questions in a paper called “High R-Value Enclosures for High Performance Residential Buildings in All Climate Zones.” Produced by the Building Science Corporation (BSC) and published by the Building America program, the 2010 paper included an oft-reproduced table with R-value recommendations for all climate zones in North America. As might be expected, the colder the climate zone, the higher the recommended R-values (see image below). 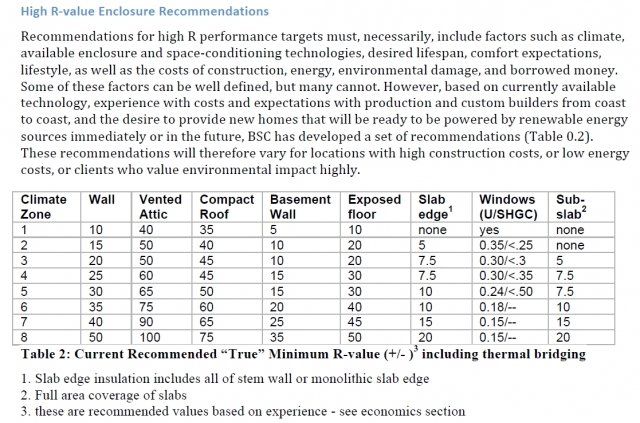 The dropping price of PV

Some net-zero builders who read the 2010 paper nevertheless used the R-value recommendations in the BSC table as a starting point for envelope design. A few experts have recently questioned these R-value recommendations, however, in light of the steeply falling price of photovoltaic (PV) modules. In the seven years since the paper was written, the installed price of a residential PV system in the U.S. has dropped from about…