Remodeler Josh Oduin and his crew have been working on a renovation project in Oregon, and one of the first tasks they needed to tackle was replacing old aluminum windows with new, more efficient ones from Marvin.

There are a few reasons to replace the old windows on this house. First, condensation is building up in between the window panes, which shows that the seals have failed and the argon gas has escaped. The second reason is that these windows are really poor performers to begin with. And the third reason is that they were not installed correctly to be properly air-sealed and waterproofed. 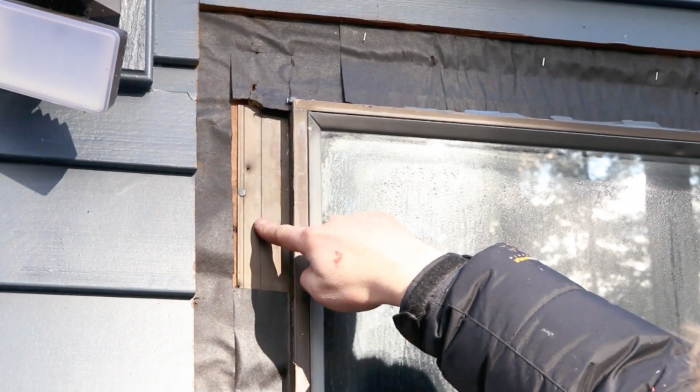 Should Your Old Wood Windows Be Saved?

The first thing we noticed is that the previous installer set the windows directly on the house sheathing and did not apply any seal-in at all. That’s a great spot for air and water to get behind the window flange and leak into the house. 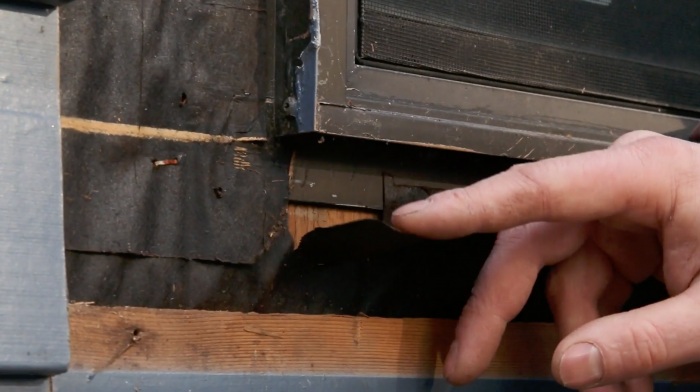 The second and more important issue we saw was the way that the original builders lapped their housewrap over the flange. At the bottom of the window, the paper is sitting over the flange when it should be underneath. In that situation, if water penetrates into the trim or the siding, it will want to run down and get right behind the paper. To  properly flash a window, the bottom course of house wrap should be installed before the window and wrap into the sill. That way, when water gets behind the siding or trim, it’ll roll down and not get behind the housewrap.

To remove the existing windows, the first thing we do is run a Skilsaw around the window to expose the window flange. Then we pull the siding, nails, and the window to prep the window opening. After making sure the opening is free of debris, we apply a liberal bead of Prosoco Fast Flash, making sure the sill has a slope to it. Once the Fast Flash is applied, we spray it down with a bit of water, which helps it set more quickly so the windows can be installed in a couple of hours. 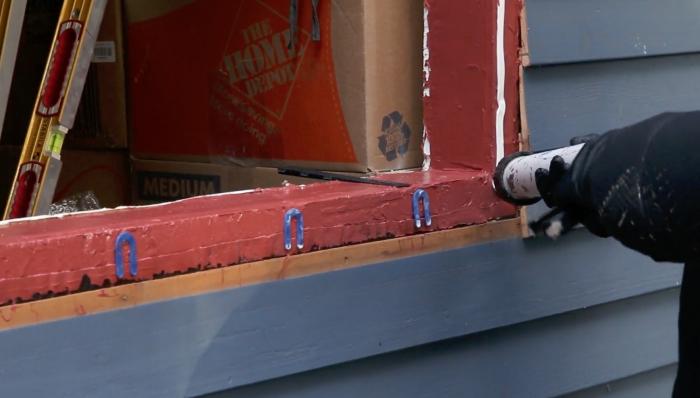 Once the Fast Flash has set, we apply a bead of Prosoco AirDam sealant on three sides, but skip the bottom, and then use blue horseshoe wedges to create a gap at the bottom so that the sill can drain if water ever gets in. 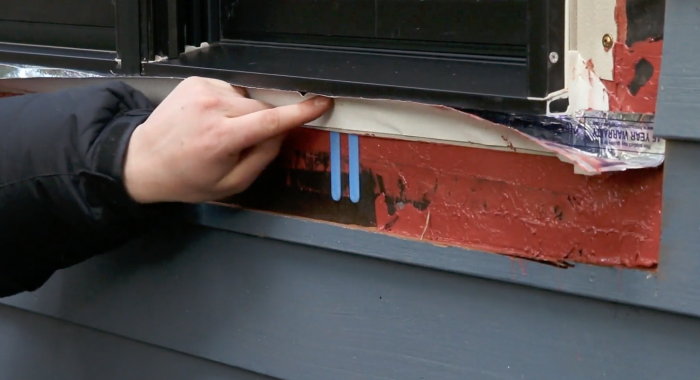 After the window is installed, we work on the last bit of flashing details, which are crucial. First, we add a piece of Henry FortiFlash 365 peel-and-stick to create a little apron for the window to drain. We peeled the top part and bonded it to the flange, but left the backing on the lower part of the tape so it doesn’t bond to the housewrap. This allows a gap so if water ever pools underneath the window, it has a place to escape. The little blue horseshoe wedge creates a gap there for water to weep out. When we go ahead and put the trim on this piece, it’ll protect it from any wind-driven rain that gets underneath the sill and keep it from driving up and underneath the window, and it’ll allow it to drain out onto the old housewrap.

We aren’t replacing the siding, and we’re able to accommodate that by adding trim to the windows. Over the course of the project I made two cuts on the siding. The first cut was made with the short side of the Skilsaw base to get access to the flanges and remove the old window. The second cut was made with a wider side of the Skilsaw, which is conveniently just the right width to make space for our 5/4 x 4 trim. 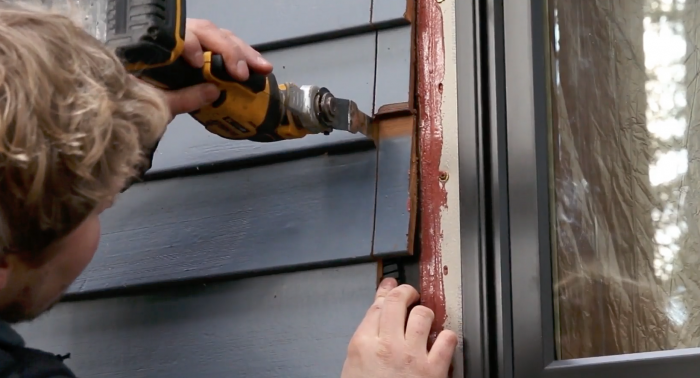 When cutting, it’s really important that the tar paper stays intact. First we make a shallow pass, less than the depth of the siding, with a Skilsaw. The siding is still intact after that pass, and to finish the cut without damaging the housewrap, we took a composite shim, slid it behind the piece of siding, and finished the cut with an oscillating multitool. To finish, we flashed the window flanges on the top and sided with more Prosoco and let that set before installing the new trim to complete the job.

Josh Oduin is a remodeler based in Portland, Oregon.