How to stop mold growth in coastal climates

Sloped roofs over ventilated attics are one of the most common, if not the most common, roof configuration in Canada. This type of roof assembly is typically associated with single family houses but they are also commonly used on townhouse complexes and large architecturally complex multi-unit residential buildings.

I work for RDH Building Engineering in British Columbia, Canada. RDH has investigated hundreds of attics throughout the Lower Mainland of B.C., and mold growth on the underside of the sheathing is a common condition.

In many cases, the mold can be attributed to condensation associated with air leakage from the interior space or ductwork, or the re-entrainment of humid exhaust air from poorly terminated ducts.

Fans in the Attic: Do They Help or Do They Hurt?

Why Wood Frame Attics Get Wet & Moldy in the Pacific Northwest

What has changed that is contributing to the mold growth?

Other than slight changes to the wording regarding vent distribution and locations, the general intent of the ventilation requirements have not changed in over 60 years. Interestingly, there is no requirement in any of the national, provincial or regional codes for ventilation amounts that are climatic-specific.

Upon reflection, attics have historically performed well because heat loss from the occupied space warmed the air in the attic, allowing the attic air to absorb and dry any deposited moisture. 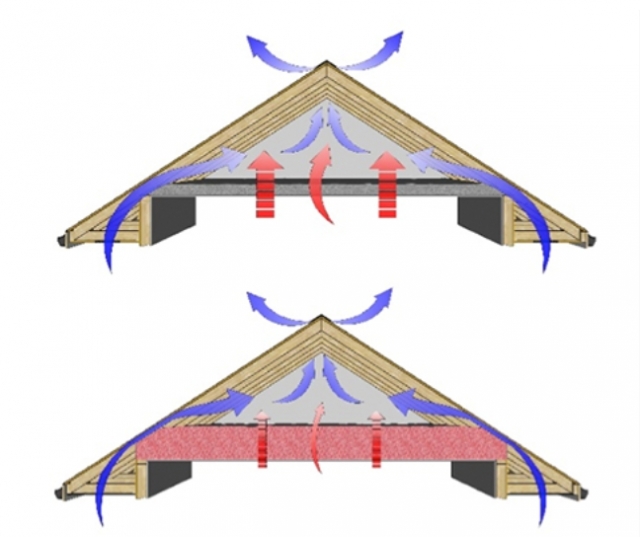 Primarily, the warm moist air in the attic rose through the upper vents and was replaced by exterior air drawn in at the eves (top image, left). In simple terms, heat from the building assisted with drying of the attic.

As insulation quantities increased in response to energy conservation needs, the quantity of heat lost into the attics decreased (bottom image, left). In many parts of Canada, the reduction in energy loss into the attics has not significantly impacted the performance of the attics because the exterior air is relatively dry and moisture in attics is not a problem. However, RDH speculated that the reduction in heat loss has contributed to mold growth in attics in coastal climatic zones. A research program was initiated to confirm our speculations. 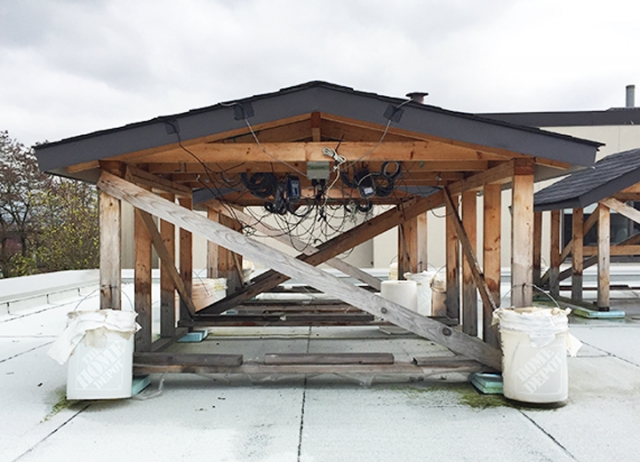 Digging to the root of the problem

The research program consisted of both a controlled field study and supplemental laboratory testing. The field study consisted primarily of constructing four test huts on top of the roof of the RDH building in Vancouver and monitoring the condition of the plywood sheathing (see photo at left).

The test huts all have the same type of asphalt shingles but the underlayments and roof pitches were varied. The huts were orientated so that one roof slope faces south and the other faces north in order to assess the impact of solar warming.

The structure below the roofs was intentionally not enclosed to provide a fully ventilated condition. Also, by separating the roofs from the occupied space below, a number of the variables that commonly have a negative impact on attic performance were eliminated such as air leakage from the interior and duct leakage.

The primary objective of the study was to demonstrate that well-constructed sloped wood-frame attics in the coastal climate experience moisture-related problems even in the absence of interior moisture sources and with unrestricted ventilation.

After monitoring from September 2012 through March 2014, we noted that the moisture content of the plywood sheathing in all of the roof huts ranged from 20% to 30% during the rainy fall through spring months. The moisture content is consistently maintained at cautionary levels for fungal contamination (above 20%) for the winter months (see graph below). 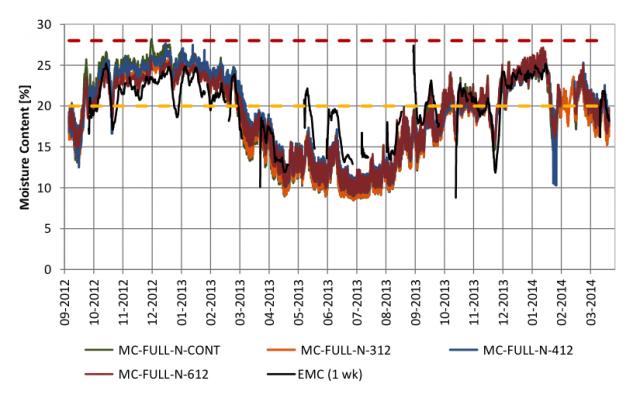 As seen in the photos below, this condition generally occurs when there is frost on the roofs and the air temperature remains above freezing. The condensation results in liquid water on the surface of the sheathing and on the nails used to attach the shingles. The presence of liquid water, even if for short periods of time, supports mold growth. 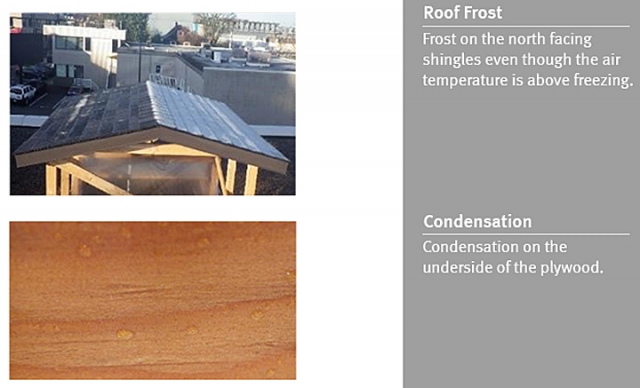 Mold growth occurred on the underside of the plywood sheathing on all of the roof huts within the first year. As anticipated, mold occurred initially on the north elevations because of the reduced solar warming.

Currently, there are two industry problems; first, what to do with existing buildings with mold in the attics, and second, how to design new attics, particularly if the insulation levels are to exceed code required minimums.

FPInnovations is currently leading a research project to evaluate the performance of various surface treatments to mitigate mold growth on wood products where mold is currently established. The results of this study should be available in the next several months. Obviously, these treatments would have to be used in conjunction with other steps to reduce moisture accumulation in the attics from the occupied space.

The use of Bluwood framing and sheathing may be an option for new construction or for comprehensive rehabilitation projects. In simple terms, Bluwood is a treatment process for wood that increases the water shedding characteristics of the wood surface and reduces the likelihood of mold growth on the surface. However, the use of Bluwood would also require care during construction of the environmental separator between the occupied space and the attic. 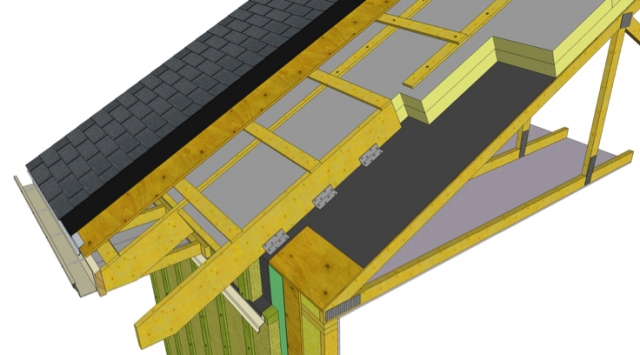 A second option for new construction could be a comprehensive redesign of the attic concept. Stealing language from wall construction, roofs could be designed and constructed as exterior insulated rainscreen assemblies, where all of the materials on the exterior of the inner moisture-shedding surface are moisture- and mold-resistant (see illustration at left).

In summary, sloped roofs over ventilated attics are not what they used to be. Click here to see RDH’s paper on this subject as presented at the 30th RCI International Convention.

Marcus Dell is a professional engineer who specializes in practical solutions to building enclosure problems. He works at RDH Building Engineering in Vancouver, British Columbia, Canada.