Rural families face the highest energy burdens of any household group in America and spend a much larger percentage of their income on energy bills than the average family, according to a new study published by Energy Efficiency for All (EEFA) and the American Council for an Energy-Efficient Economy (ACEEE).

The report, “The High Cost of Energy in Rural America: Household Energy Burdens and Opportunities for Energy Efficiency,” provides new evidence of the urgent need to expand energy efficiency programs to vulnerable communities in rural regions throughout the U.S.

The report is the first to focus on the energy burdens shouldered by those living in rural America. It builds on a previous report, “Lifting the High Energy Burdens in America’s Largest Cities: How Energy Efficiency Can Improve Low-Income and Underserved Communities.”

This report couldn’t come at a better time. The Trump administration’s Council of Economic Advisers has misread and manipulated data to declare that the war on poverty has been a success. The administration’s aims are cynical at best and harmful to the well-being of many households and communities across the nation by punishing the poorest and most vulnerable.

Weatherization Funding Has Been Slashed

The Uneven Burden of Energy Costs

Unlocking the High Value of Clean Energy in Low-Income Communities

A Forgotten Tool to Solve the Housing Crisis

Can Low-Income Housing Be Energy-Efficient and Affordable?

Simple Techniques for Lowering the Cost of Zero-Energy Homes

As this new report shows, poverty and deprivation not only persist but are multidimensional and include high energy burdens and increased vulnerability to utility shut-offs. And poverty may be worsening in many of our bedrock communities and neighborhoods across rural and urban communities alike.

Overall, while burdens vary greatly by region, rural households throughout the United States have a higher median energy burden (i.e., spend a higher percentage of household income on energy bills) than others in their overall region, as well as a higher burden compared with metropolitan households. Nationally, the median rural household energy burden is 4.4%, which is almost one-third higher than the national rate of 3.3% and about 42% above the median metropolitan energy burden of 3.1%. When looked at even more closely, the East South Central, New England, and Mid-Atlantic regions have the highest median rural energy burdens at 5.1%

Pay rent, or keep the heat on?

In several regions (including New England and the Mid-Atlantic regions), one out of four low-income rural households have an energy burden greater than 18%. The report also finds that over a quarter of all rural low-income households devote more than 10% of their income to energy expenses. That’s a lot, and for a household it often means deciding between keeping heat or lights on versus paying rent, buying food, or paying for medicines or school supplies.

Such high energy burdens increase the likelihood that these households will see their utility services shut off at some point. Once shut off, additional fees increase the cost of reestablishing service, and an inability to pay leads to arrears that damage credit ratings. That makes reopening services or even qualifying for better housing difficult or impossible.

Energy efficiency upgrades such as adding insulation and sealing air leaks can lessen these energy burdens by as much as 25%, resulting in more than $400 in energy bill savings annually for some households. These improvements also make homes more comfortable and healthier. And improved efficiency reduces the need for power plants to generate electricity from fossil fuels, cutting energy bill costs and avoiding climate-warming pollution for everyone.

According to the U.S. Department of Agriculture, rural households make up roughly 16% of all U.S. households and are spread across 72% of the nation’s land area, making rural housing stock much less dense than in urban and suburban areas. In this study, rural was defined by utilizing U.S. Department of Agriculture’s rural-urban commuting area codes to map those regions not located in a metropolitan census tract.

Due to the lower densities of the population over wider areas, the cost of delivering energy and energy efficiency services to rural households is on average higher than for their urban counterparts. Rural communities are more likely to be serviced by smaller rural coops or publicly owned utilities that may lack the capacity or resources to invest in comprehensive energy efficiency programs. As such, energy costs are vastly higher than the national averages and higher than in metro areas.

Because of the uneven build-out of infrastructure, rural households often must rely on less efficient methods of accessing energy for critical needs. Further, the lower density in rural communities has meant that rural land and housing values tend to be lower, leaving limited options for financing regular home repairs and updates, allowing homes to deteriorate over time.

Rural families are also more likely to be impoverished. Approximately 43% of households in rural areas have incomes below 200% of the federal poverty level, increasing vulnerability to high energy burdens. Low incomes, high energy use, non-ownership status, and inefficient housing stock are some of the key drivers of high energy burdens, which can place significant financial stress on families and other households. 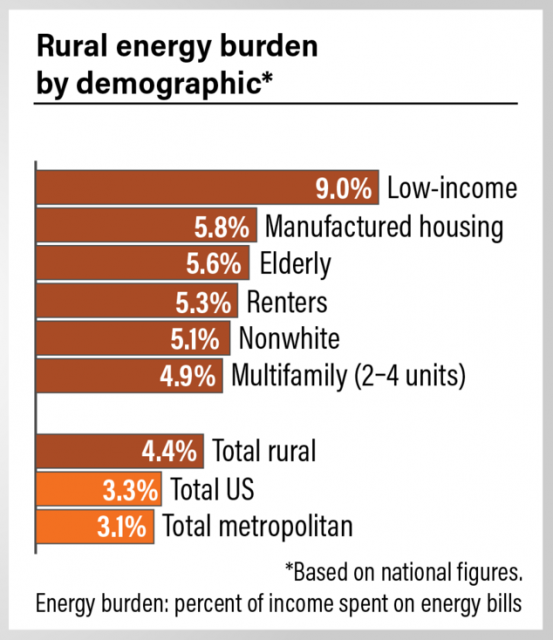 Within rural communities, some groups face even higher burdens than the overall rate for the region, making them most vulnerable to changes in energy costs, usage, and housing options. For example:

Residents of rural manufactured housing experience a median energy burden that is 32% higher than the overall rural energy burden.

Residents of multifamily housing with 2 to 4 units have a median energy burden that is 20% higher than that of rural single-family households.

Rural renters experience a median energy burden 29% higher than that of owners.

Households of color in rural areas have energy burdens 19% higher than that of their white counterparts.

Benefits of energy efficiency and weatherization

As this video below produced by EEFA and ACEEE shows, high energy burdens are not just abstract or technical issues, they impact real life decisions and living qualities for millions of Americans.

Weatherizing a home for families living at or below 200% of the federal poverty level — which is just over $12,000 for a single person household and $25,000 for a four-person household — saves an average single-family home $283 per year. A full retrofit of a rural household to be as efficient per square foot as its metropolitan counterpart would yield savings of $119 per year for those families. Households residing in rural manufactured homes would see savings of $458 per year; over one-quarter of their energy bill and a full 1.5% of their household income. Rural renting, low-income, elderly, and non-white families would all save over $100 per year if they had the same utility costs per square foot as the metropolitan median household.

As our report shows, we can support increasing energy efficiency of rural homes in several ways, including:

Don’t allow the Trump administration to increase burdens on poor families it doesn’t believe exist. Just a month ago, U.S. Ambassador to the United Nations Nikki Haley denounced a U.N. report saying 18.5 million Americans suffer extreme impoverishment as “misleading and politically motivated.” The administration and its allies are politically motivated to underestimate the levels of poverty and hardship faced by many Americans as a justification for their attempt to eliminate social safety net programs and initiatives these households rely upon.

By improving housing efficiency with the goal of reducing energy burdens, we can have an impact on a wider range of issues. These “non-energy benefits” include improved health, increased job opportunities, and a better quality of life in rural communities. The benefits far outweigh the costs. This study shows that it’s time to turn our attention to a more energy-efficient rural America.

Khalil Shahyd is senior project manager of the Energy Efficiency for All Project at the Natural Resources Defense Council. This post originally appeared at the NRDC’s Expert Blog.