Once all of the wall SIPs were fastened in place, it was time to install the roof trusses

As they set out to build a single-family Passivhaus on Potwine Lane in Amherst, Massachusetts, Alexi Arango and LeeAnn Kim asked themselves, “Is it possible to live without burning fossil fuels?” One measure of success would be meeting their goal of net-zero energy performance. This is the sixth blog in a series.

The walls are in place and the roof trusses are up. Don and crew are now working on the roof Zip sheathing. The project is starting the come together and look like a house! The weather has been amazing — a big reason why so much got done this week.

Using the Lull forklift to raise the SIP walls

With the ground dried up, Don was able to maneuver the Lull forklift through the mud, allowing him to raise the SIPs on the east and west sides. The SIPs are considerably bigger and heavier than those on the north and south sides. It would have been difficult to lift them by hand, so we really lucked out.

The video shows the Lull forklift lifting the SIP, with a rope used to stabilize the SIP. Notice how the SIP starts to slip off the fork, and then the guys on the roof were able to pull it back into place, but not before having to walk out on the headers like acrobats. They are fearless. Keep in mind that there’s no floor under them – they are balancing on the header beams, and on one side there’s a two-story drop! 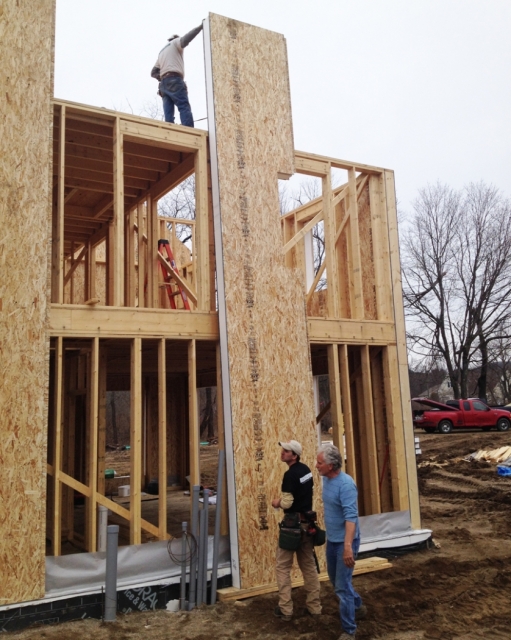 Once the Lull forklift got the SIP most of the way up, the guys on the roof were able to pull it upright against the house. 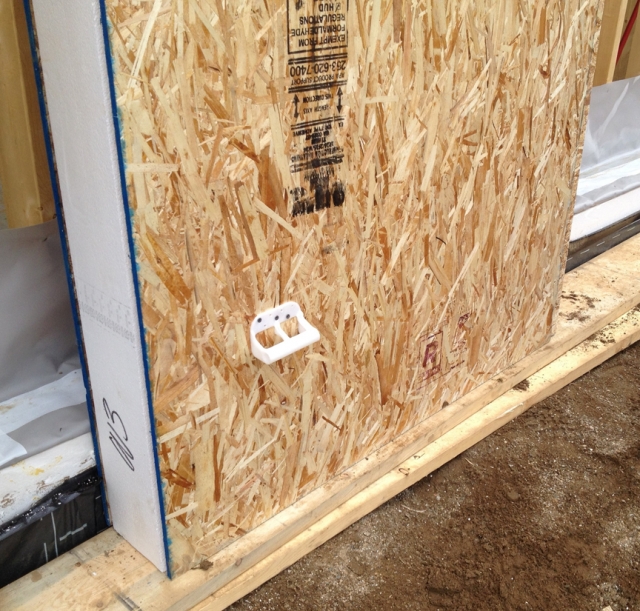 To help lift the panel onto the foundation ledge by hand, a little plastic handle came in handy. 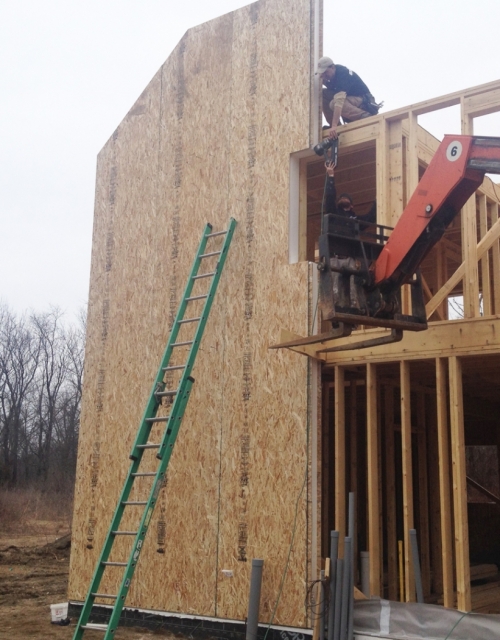 Sliding these large panels over was difficult, so the Lull forklift was used to push them in place. For some reason, the panels on this side came out bowed, making it tough to get them to interlock. Using the forklift to push on the panel, the guys hammered furiously on the seam, gradually jostling the two panels together. 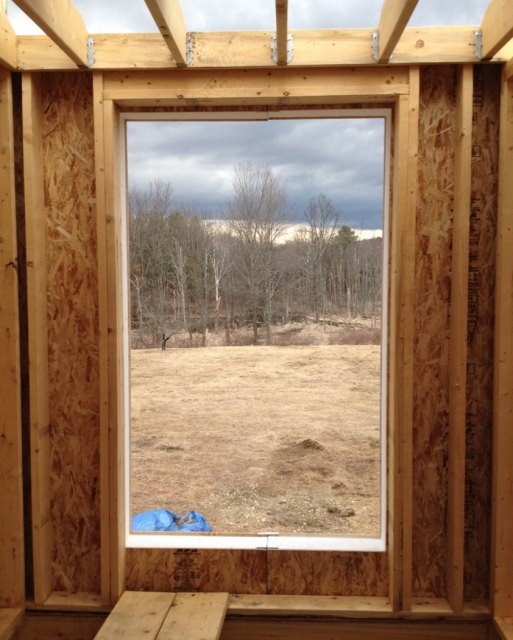 Update on the views from the windows out back

Now that the walls are up, I’m less concerned about the views out back. The walls do indeed obscure the most wonderful parts of the view, but now that you can’t see those parts, you don’t know they are missing. Instead, all you see is a subset of the view, but it looks charming regardless. 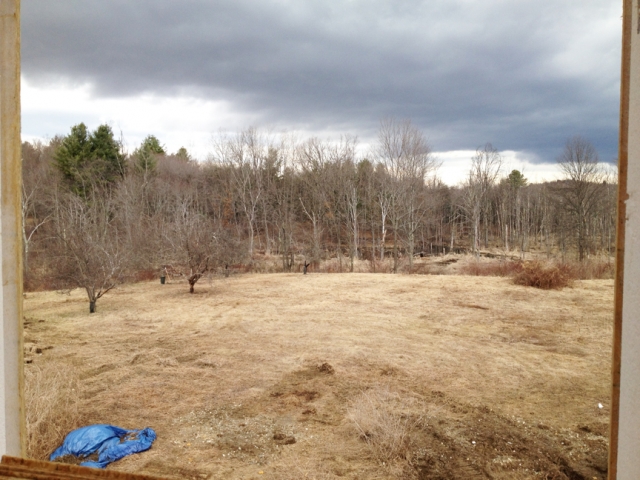 If you walk up to the rear bedroom window, you observe a reasonably wide-angle view, just not the whole wraparound view. Still, it would have been nice to have more windows on this side of the house — the north side — but I’m happy with how it turned out. Neighbor Jesse (an architect, coincidentally) remarked that sometimes it’s good to have to “work for the view.” 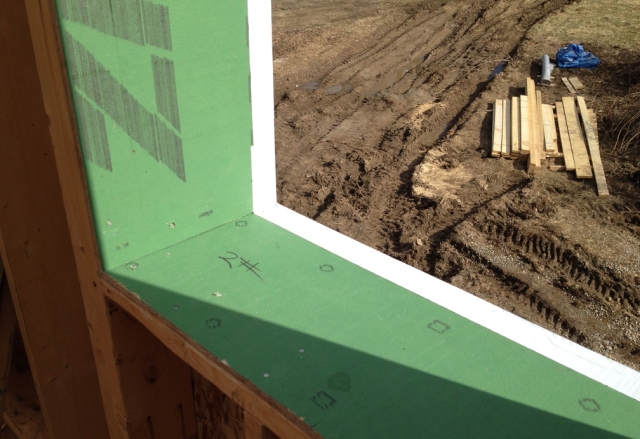 Details at the window frame and roof eave

Zip sheathing at the window opening provides a moisture-resistive barrier and air barrier all in one panel. The edge of the sheathing is taped around the corner of the rough opening. 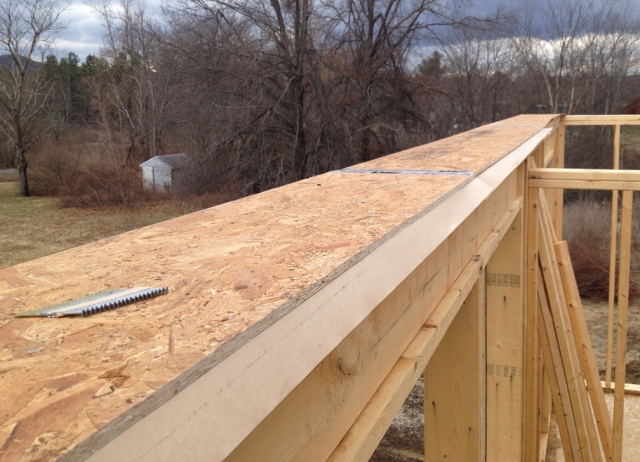 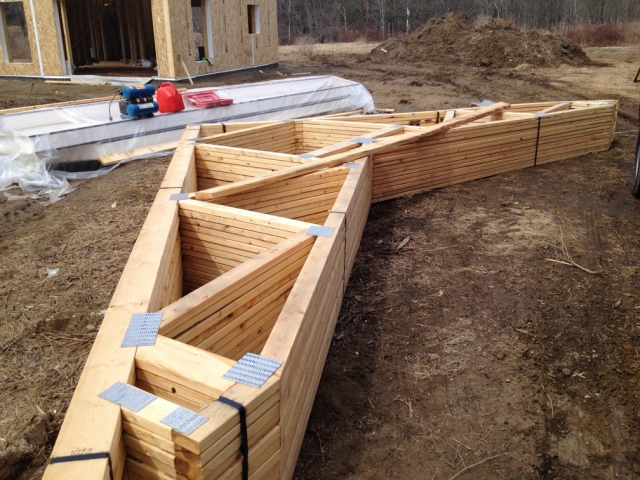 The roof trusses were manufactured off site and delivered on Tuesday. The Lull forklift came in handy for getting these up on the roof. 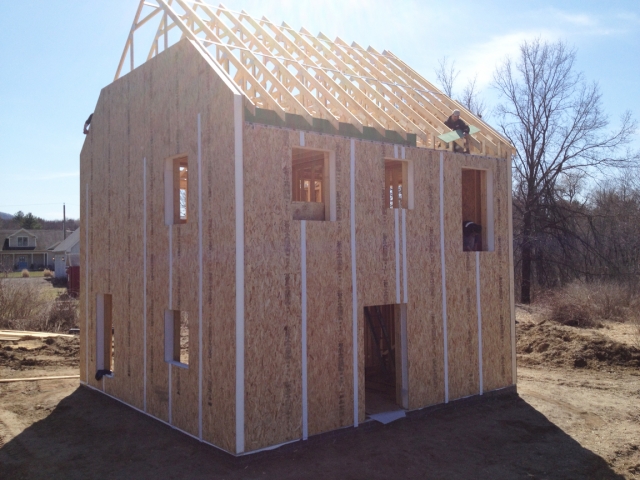 The rest of the week was spent working on the roof, even with two extra guys for some of the time. A lot of work (and exciting acrobatics) went into getting this part of the roof together.