The average American generates about 1,500 pounds of garbage annually, and then spends lots of tax dollars disposing of it.

Even as recycling has taken off across the country in recent decades, the volume of all this trash has kept growing — albeit at a slower pace.

Since I research how people are using the internet to reuse products, share resources, and generally make more sustainable choices, I decided to see whether Craigslist might be helping to at least slow the pace of solid waste growth.

Let’s Mine Our Landfills

Craigslist is the best-known website for buying and selling, or simply giving away, used stuff. Others include Freecycle, LetGo, Gumtree, and OLX.

Founded by Craig Newmark in 1995 in the San Francisco Bay Area, Craigslist rapidly expanded once internet access became widespread starting in 2000. It now operates in 413 U.S. metro regions the U.S. and the website draws more than 400 million visitors every month, mostly in North America.

People in just about all of the nation’s heavily populated areas, including Abilene, Texas; Rockford, Illinois; and Hartford, Connecticut, use Craigslist. But its arrival was staggered.

Furniture, clothing, and appliances are the most commonly exchanged items. But it’s also a system for ditching or obtaining everything from diapers to trucks.

In a study that I recently described in the journal Management Science, I looked at whether exchanging this stuff keeps it out of landfills and incinerators.

Specifically, I checked what happened in California, Florida, Minnesota, North Carolina, and South Carolina, five states with the best annual county-level solid waste data. Using statistical techniques, I contrasted what happened with solid waste rates in counties in those states after they became Craigslist hubs with what was going on in comparable places where it had not arrived yet.

I found that the volume of consumer-generated waste declines by 3% to 5% when Craigslist becomes active in an area. I also saw that this effect persisted for at least two or three years once local residents become more apt to reusing furniture, clothing, appliances, and other stuff that they bought through Craigslist. 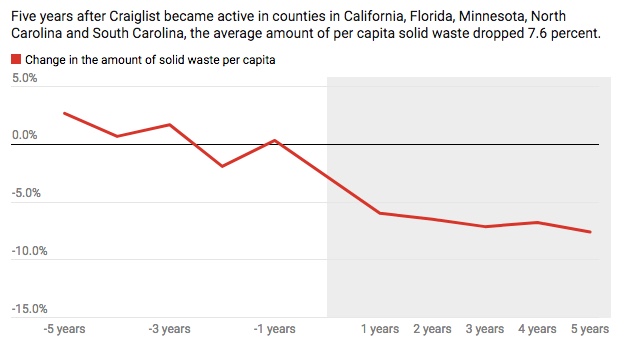 Craigslist is among the more successful pillars of what is commonly known as the circular economy — that is, efforts to keep products and materials in use for as long as possible.

Interestingly, it has counterparts that encourage exchanges and reduce waste within industries and in the business world. 2GoodtoWaste and the Materials Marketplace are two of more popular online industrial reuse marketplaces. The extent and variety of these listings can attract enough buyers to create markets for just about anything, from surplus chemicals to salvaged wood.

Craigslist and its business-world equivalents may seem to be nothing more than a gargantuan garage sale with a website. But this model has distinct advantages, as my study showed. The sheer number of listed items and people who list them is massive, boosting the chance that you might find something pretty similar to, if not exactly, what you need.

Suvrat Dhanorkar is assistant professor of supply chain management at Pennsylvania State University. This post originally appeared at The Conversation.