The Potwine Passivhaus Gets Insulation and Drywall

At the last minute, the walls are made thicker to make sure that the house meets the Passivhaus standard

As they set out to build a single-family Passivhaus on Potwine Lane in Amherst, Massachusetts, Alexi Arango and LeeAnn Kim asked themselves, “Is it possible to live without burning fossil fuels?” One measure of success would be meeting their goal of net-zero energy performance. This is the eleventh blog in a series.

So much for my plan to update the blog every week. I’ve been super busy, but at the same time the project slowed down to a crawl, so I’ve bunched up the past month and a half into a single post. The builder had other jobs. We were waiting for this and that. Sadly, carpenter Don came down with Lyme disease, but he’s doing better already after a round of antibiotics. After a month and a half, we got the roofing on (1 day), the blower-door test done (2 hours), the rough plumbing and electrical work (3 days), the insulation (3 days), the drywall mostly up (1 week), and the exterior window trimming mostly done (lots of time). 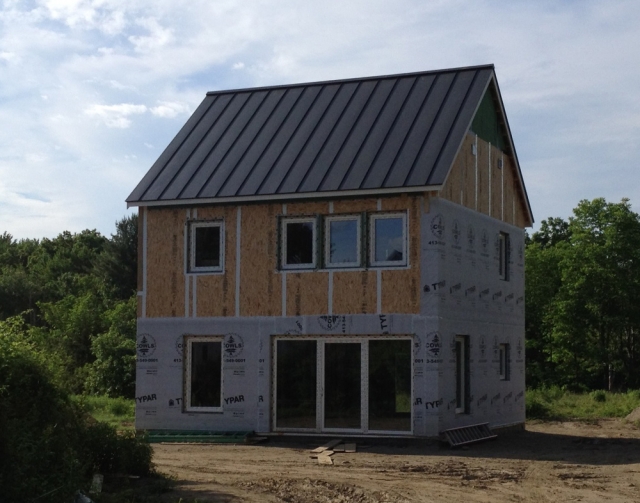 The standing-seam roof is beautiful, mostly

At first, the standing-seam roof looked amazing, with a deep rich gray color and thin sleek seams widely placed apart. I was glad we went with the more expensive 24-gauge steel which is thicker, formed in the field, and doesn’t have the more industrial-looking ribbing. 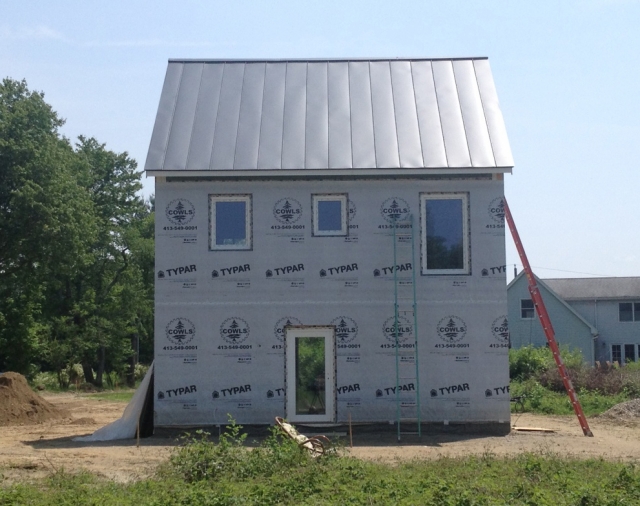 But then I noticed that when the sun is high up in the sky, which happens to be a common occurrence, the roof material looks like a tin can about to crumple – kind of a cheap look for an expensive roof. Apparently, this is a common occurrence with standing-seam roofs; it’s a tradeoff for the extra durability and sleek look. By and large, the roof looks great from almost every angle — just not from the road during midday. 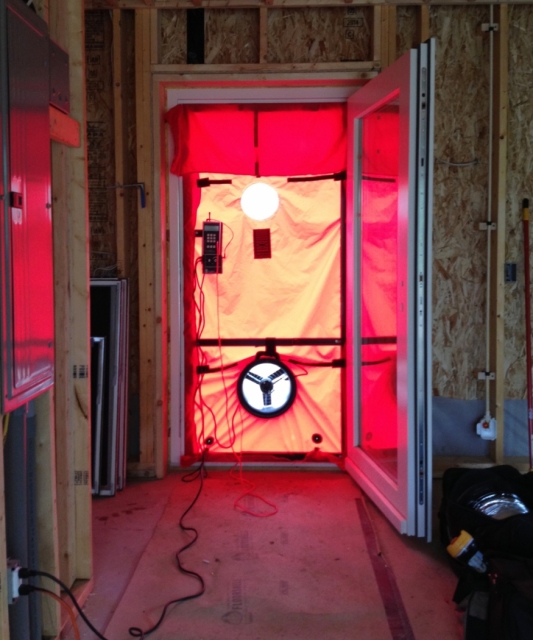 The blower-door test: the ultimate reckoning

The blower-door test is like a baseball pitcher’s earned run average (ERA): it’s the ultimate measure of the builder’s prowess. Everyone was anxious about how the test would turn out.

A critical part of the Passivhaus concept is to seal the envelope of the building in order to prevent hot air from seeping out, and to avoid drafts of cold air from seeping in, which tend to be unpleasant in the winter. To verify the degree to which the house has been sealed up, we need to measure the flow of air passing through all of the little unsealed cracks in the envelope.

To do this, we replace the front door with a fan and use it to blow air out of the house, and then measure how much air passes through the fan. The flow of air passing through the fan must be equal to the flow of air through all the little breaks in the envelope; there is no other place for the air to go. Presumably (I’m guessing here), the fan is calibrated such that the air flow can be determined from the fan speed, at a given pressure between the inside and the outside. The measured flow is not necessarily the real air leakage, however. The standard pressure difference used for the test is 50 Pascals, which is substantially greater than you would normally get from wind or your ventilation system, but it serves to make sure everyone is testing under the same conditions. 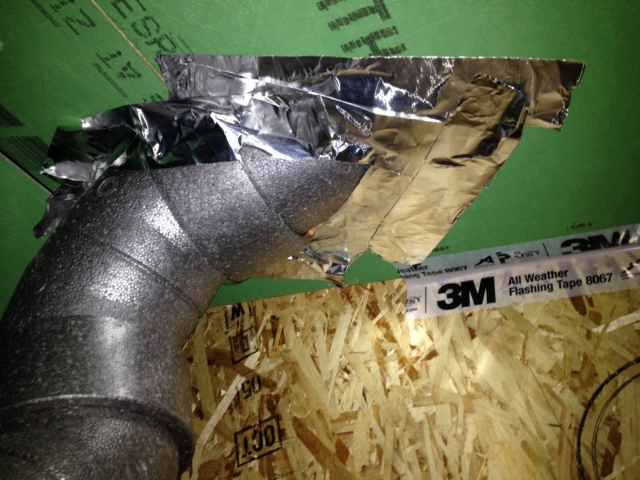 Plugging up holes around the HRV

We hooked everything up and started measuring the flow, then ran around the house feeling for drafts to plug up. We found a couple of spots in the attic around the HRV where the exhaust and inlet ducts penetrate the air barrier. It seems that the HRV got positioned too close to the wall so it was difficult to tape around the duct adequately. Also, the angle at which the ducts cross the sheathing is not ideal. It’s always tough dealing with subcontractors: they don’t have much interest in making sure the air barrier will be easy to seal.

A spectacular “air changes per hour” (ach) number, then a good ach

After plugging everything up, we got a final flow measurement, in units of cubic feet per minute (cfm). The certification guy (Mark Newey, of CET) then calculated the number of air changes per hour, meaning the fraction of air that would leak out of the house during an hour, arriving at 0.23 ach at 50 Pascals, an unbelievably awesome number! The Passivhaus target is 0.6 ach50, and almost nobody gets down near 0.2 ach50. We high-fived each other and went home. Only later, when I relayed the information to the architect, did we realize that we were using the wrong number for the volume of the home. In reality, the result came to 0.34 ach50 — still an excellent number and a huge testament to the amazing craftsmanship of Don the carpenter and the rest of the Integrity team.

At the last minute, GO Logic was running through their heating demand calculations and realized that the home wasn’t going to meet the 15 kWh/m2 per year goal set by the Passivhaus standard. We decided to increase the thickness of the inner stud wall from 4 inches to 6 inches and to use blown-in fiberglass instead of blown-in cellulose, for its better R-value. Cellulose is often recycled, but there is some concern about the fact that it is treated with chemical fire retardants, so I was glad to not have to worry about that. The fiberglass is made of recycled glass and does not need to be treated with fire retardants. 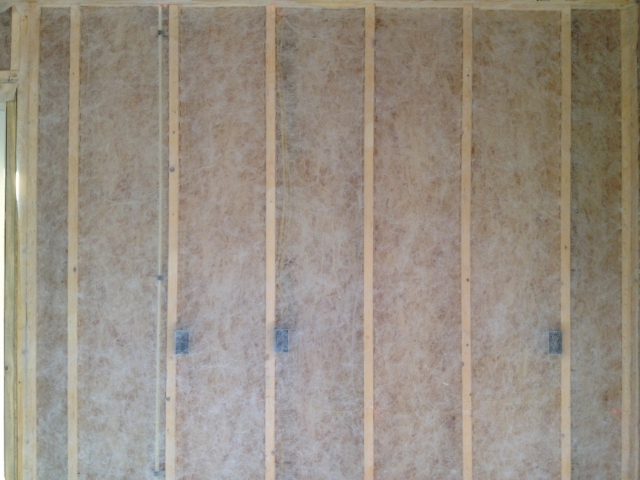 The first step is to put up a mesh (an air-permeable membrane). 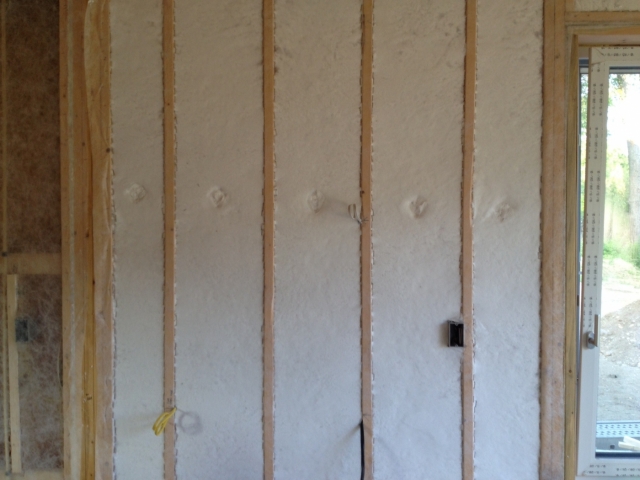 The fiberglass is blown in through holes in the mesh until the stud cavity is completely filled and the fiberglass is compacted, creating an interesting artsy wall with a quilted look. 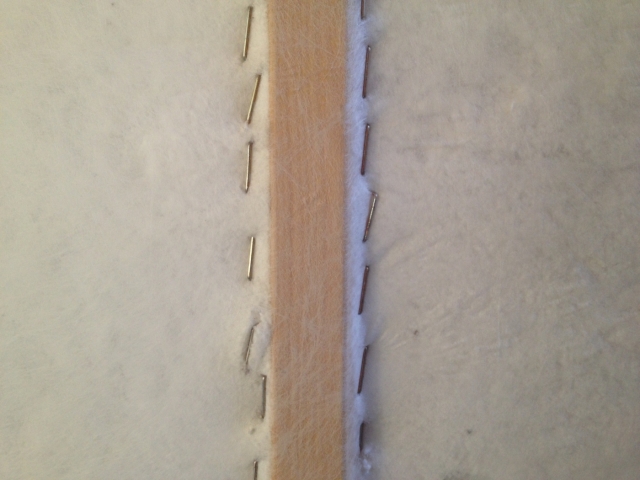 To keep the mesh from bulging outward, it is stapled at the studs, which makes for a cool stitch pattern. Too bad the walls are going to get covered with drywall.

What’s the purpose of drywall?

No offense to the drywall crew, but drywall strikes me as completely useless. The amount of material used is enormous. It’s bulky and heavy and takes forever to install. It uses up space and, after it was installed, it made the rooms feel smaller. Why not just tack up a thin paneling material?

It’s a good thing we enlarged the window to the stairway, and also good that it’s an operable window — otherwise it would have been impossible to get the massive drywall panels upstairs. Passing them through the window was still a major exercise. There must have been four or five loads, each as massive as the one you can see in the image below. 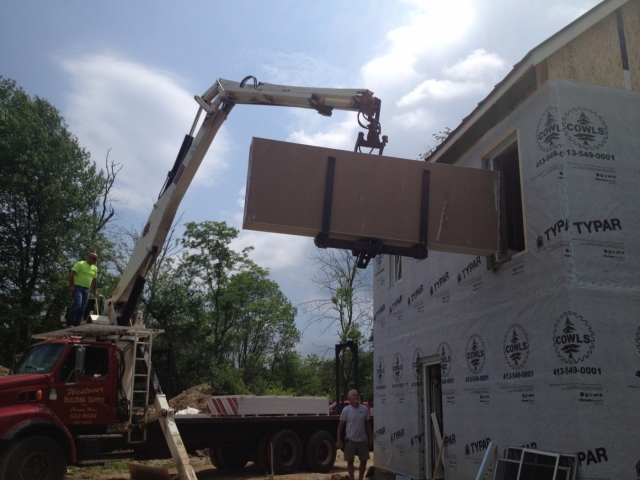 The drywall really makes the rooms feel closed-in and small, but apparently once the rooms get painted they open up again. I’m keeping my fingers crossed.

Finishing the drywall took one guy over a week, being careful with the corners and sanding down everything nicely. 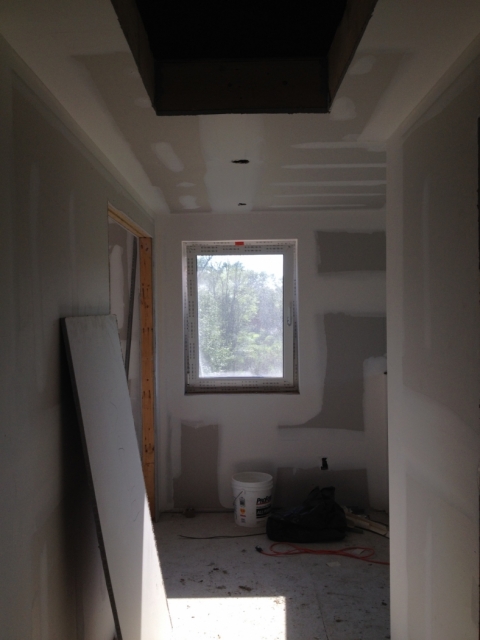 The upstairs hallway is starting to feel like a super nice spot in the home. It feels luxuriously large for a small home — almost too large — but I think we made the right decision to keep it big. For a while I played with tightening up the hallway to give more room for the bedrooms. In the end, the bedrooms indeed came out tiny, but that’s fine. For someone like me who struggles with insomnia, you want to keep your bedroom for sleeping, a dedicated space without distractions. The hallway, on the other hand, gets a lot more usage and impacts the feel of the home in a greater way: it’s your first impression as you walk up the stairs and it’s a common space that gets a lot of traffic. 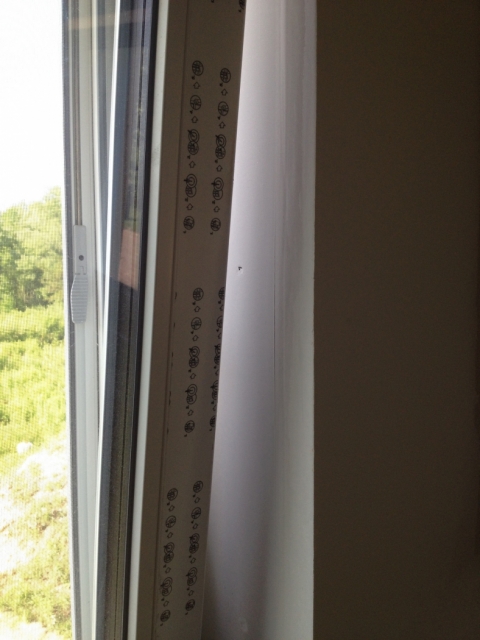 Here’s a look at how sharp the drywall edges came out, which really helps give the windows a crisp modern look.

Window trimming and starting the siding

Most of the week was spent finishing the window frames, a long and arduous process that seems to have taken 99% of the time spent building the house. I’ll have to write a dedicated post in the future describing the window trimming. Each window required so much measuring and cutting and fitting things together — it’s like building a delicate piece of furniture, but the piece is hanging one story up in the sky and you need a ladder to access it. 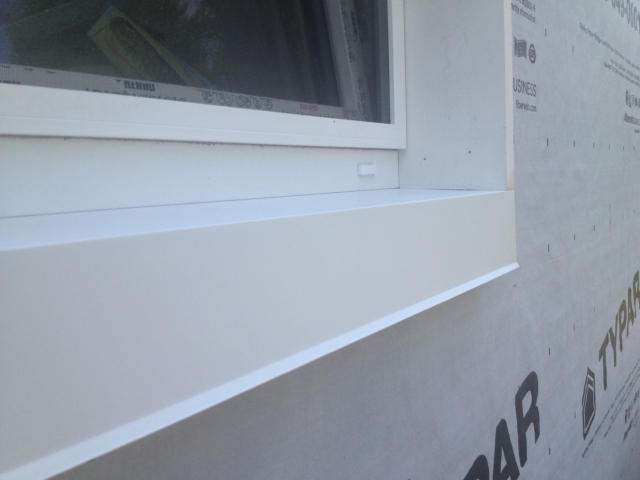 The aluminum flashing was formed by Don in the field and carefully cut and wedged into place. 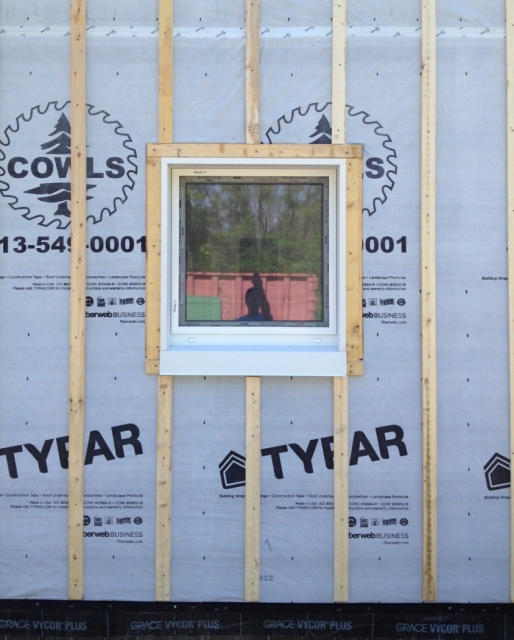 Here’s a shot of the furring strips that will keep the siding offset from the walls. The little gap between the siding and the wall allows air to flow from under the siding up into the space just below the roof, rising at it warms up and serving to prevent the buildup of moisture that can lead to rot.