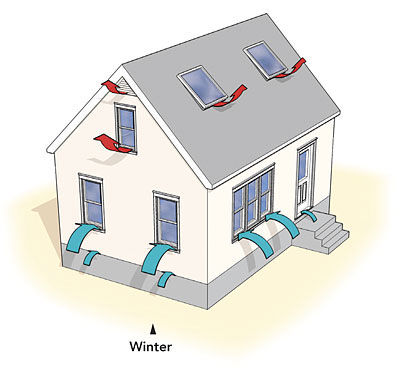 As heat escapes a roof, cold air is sucked in through the basement and first floor windows. In summer, the opposite happens. [Click image for slideshow.]

Like wind, the stack effect can move large volumes of air through a building envelope. In the winter, the warm air in a heated building is lighter (less dense) than the cold air outside the building; that warm bubble of air wants to rise up and out. The flow of air leaving the top of the building draws cold air into cracks at the bottom.

The reverse happens in summer when hot air outside of an air-conditioned house can push cooler indoor air down from the ceiling and out of cracks in the basement (see drawing). At least in theory, this can lead to moisture problems on the top floor.

Leaky buildings consume tremendous amounts of energy. Air leaks can contribute to condensation, compromising the quality of the indoor air. For high-rise residential buildings in cold weather, that isn’t the worst-case scenario — it’s the normal scenario (see “Why revolving doors were invented,” below).

WHY REVOLVING DOORS WERE INVENTED

If the stack effect is a big deal in two-story houses, imagine what kind of pressure it causes in high-rise buildings. This pressure is so significant in fact that “when skyscrapers were first developed at the turn of the century, people also had to invent revolving doors because you couldn’t open the front door due to the stack effect pressure,” says Straube. “The cold air was rushing in with so much pressure that it was difficult to push the exit doors open.”

Stack effect feeds on itself

“You wind up with this merry-go-round — sucking air up the bottom, heating it up, and blowing it out the top,” says Straube. “There’s so much airflow in the elevator shafts that you can float! You can just put out your arms and you’ll float in the middle of winter in many of these buildings.”

One Air Barrier or Two?

Pinpointing Leaks With a Fog Machine