Vapor Barriers, Radon, Basement Slabs, and VOCs — How to Stop the Poison?

When radon or volatile organic compounds are a threat from below, the barrier needs to stop more than moisture, and it needs to be continuous and tight

How’s this for a dicey scenario: Arlene DiMarino is a homeowner with chemical sensitivities who lives a couple of blocks away from an EPA Superfund site.

“I am aware of a toxic plume of underground water that is close by,” she writes in a Q&A post. “I am concerned that these VOCs can permeate the cement floor and foundation.”

She plans to pour another layer of concrete over the existing basement slab. This will give her an opportunity to insert a vapor barrier to block any toxins from migrating into the house. But what’s the best product to use?

As GBA senior editor Martin Holladay points out, concrete itself is a good air barrier, as long as any cracks that develop are sealed with caulk.

But, he adds, it’s important to install a vapor barrier — typically 6-mil polyethylene with taped seams — under any concrete slab. 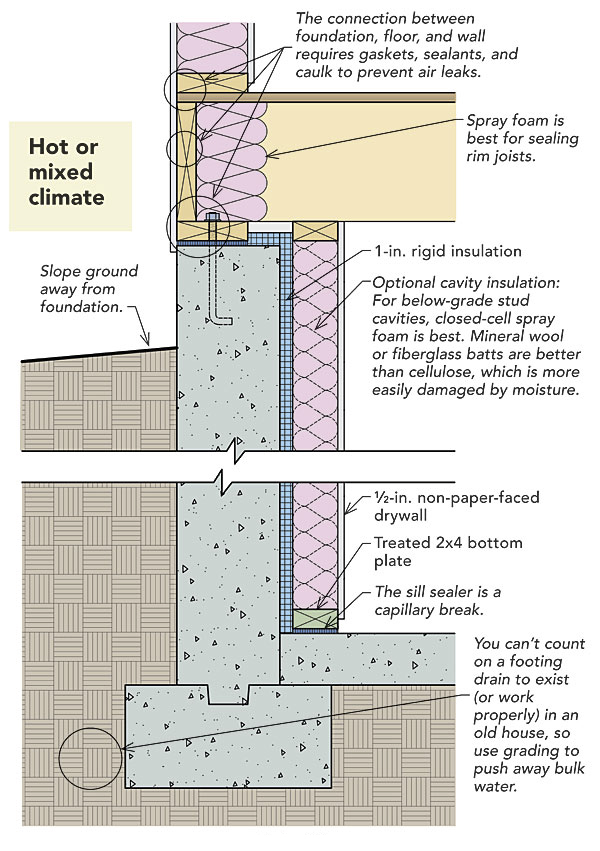 7 Steps to an Energy-Efficient House: 1. The Basement 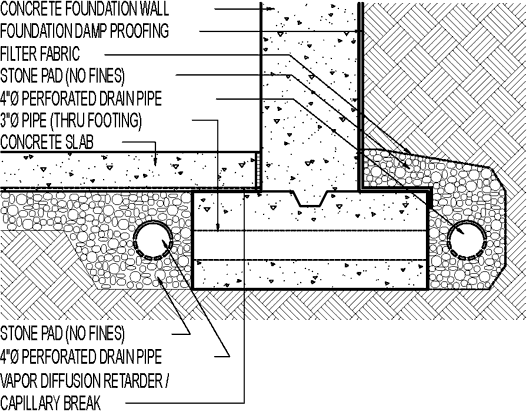 Other points of view are quick to emerge, like this flat statement from Robert Riversong: “I would never use standard 6-mil polyethylene under a concrete slab.”

Instead, Riversong recommends a product called Tu-Tuf, a robust, cross-laminated, 4-mm-thick plastic that’s advertised as free of pinholes. (It’s made by Sto-Cote Products and sold widely over the Internet.)

David Meiland suggests a product called Stego Wrap, which is 15 mils thick and said by the manufacturer to resist tears, splits, and punctures.

There’s also something called SlabShield, writes Andy Ault. SlabShield combines two layers of polyethylene and one of aluminum. The polyethylene sandwich protects the aluminum, a highly effective vapor barrier, from lime in the concrete. The manufacturer also claims that SlabShield provides a thermal break.

Ault says he used SlabShield on a Habitat for Humanity LEED Platinum project and was pleased with the result.

“It is much stronger than typical 6-mil, so it is designed for that type of rugged application that Robert alluded to,” Ault writes. “We had volunteers walking on it, and it never missed a beat. The ship-lap edge design also gave us a high comfort level that the taped seams will perform well.”

Yet another possibility, writes Craig, is Red Guard, a waterproofing and crack-prevention membrane made by Custom Building Products.

“Typically it is used under tile, and it is being used in some applications as a shower pan liner,” Craig says. “It seems perfect for a situation between slabs because it acts as a crack isolation membrane and vapor barrier, so it should seal any cracks in the original slab and prevent any new cracks from leaking vapor through. “

As posters recommend tougher and tougher vapor barriers, Garth Sproule points to a conversation with Joseph Lstiburek, who couldn’t care less if a sub-slab layer of plastic has a few holes in it.

Even if Arlene were to don a pair of golf spikes and walk all over her plastic vapor barrier, it would still do a pretty good job, Lstiburek says in a Green Building Advisor podcast. “So what’s the total surface area of the punctures compared to the total surface area of the plastic?” he says. “If I’m there for about two hours, maybe it’s 10 percent. So I basically have reduced the vapor control layer effectiveness of that plastic sheet by 10 percent.”

When the barrier is topped by four inches of concrete, she’ll have a very effective air barrier and “a darn good vapor retarder.

“So I haven’t increased, even from a measurable perspective, the amount of water vapor transmission from the ground into the floor with the ripped and torn plastic sheet,” Lstiburek says. “That’s why I always laugh at the people that say, ‘Well, you gotta tape the joints and you gotta be careful not to puncture it.’ Give me a break!”

Replies Riversong: “I disagree with Dr. Joe. With a good sub-slab radon-mitigation system that effectively depressurizes the soil, an intact concrete slab might be good enough. But, if there is any positive soil gas pressure, then no concrete slab will be tight enough to prevent radon intrusion, which can pass through a crack too small for the eye to see.”

What about a real radon-mitigation system?

In new construction, the area beneath the basement slab is often vented to the outside, giving radon, a naturally occurring radioactive gas, a way to escape. The vent can be passive or powered by a fan.

This is the retrofit measure recommended by Riversong, who suggests removing the existing concrete slab, and adding a layer of crushed stone and a perforated pipe connected to a roof vent.

Others agree. “Pulling everything existing and starting from scratch is never a bad strategy,” writes Ault, “but that will at least double your cost (if not more), so you need to be sure that the cost/benefit ratio makes sense for you.”

Looking at Arlene’s basement problem from the radon perspective is a good one, in my book

In my own home, with a leaky basement floor and no spare head height at all, and a radon problem exacerbated by the installation of spray foam insulation on the basement walls, I tried a variety of ways to air seal the radon out, to no avail.

If you can’t keep it out, flush it out

And when I called a local radon technician to see about a sub-slab depressurization system solution, he let me know that it was unlikely that he could pull hard enough with even two fans to depressurize such a leaky slab. So our solution was a heat-recovery ventilator servicing just the basement.

But exhaust fans use energy

The HRV drove the radon concentration well below the EPA threshold of 4 pico-curies per liter. It was a practical, easy solution to a soil gas problem, albeit with a steady energy penalty (our FanTech HRV pulls about 1 watt per cfm on any of the three 100/150/200 cfm settings).

If you can’t give up the height, and you don’t have the stomach to completely redo your basement slab, I would go after any potential or actual soil gas problem with some sort of exhaust strategy, purchasing the highest-efficiency fan your money can buy (there are HRVs in the GBA Product Guide with efficiencies up to more than 5 cfm per watt).

One way to offset the extra energy use

One last note: I reduce the energy penalty of our HRV in the late fall/winter/early spring by hanging our wash in the basement. The HRV easily handles (by exhaust exchange) the 4 pounds of water left in a load after our horizontal-axis washer is done with it. And I’ve checked the interior relative humidity in the basement to verify that this approach is not a problem; it barely bumps the interior RH.