Video: How to Hang Airtight Drywall (1 of 3)

Justin: Stopping air leaks is the single most important part of making a house more energy efficient. You can stop air on the outside with plywood, housewrap, and tape, but the best air barrier is more of a system that incorporates all the components of a wall or roof assembly.

We decided to drywall the garage shop in Fine Homebuilding’s project house using the Airtight Drywall Approach. Partly to show our readers how to do it and partly so that we could make Myron Ferguson do our dirty work for us.

The outside of the house will eventually be covered with housewrap and foam sheathing, so the drywall is not the primary air barrier; it is part of a larger system.

Myron: When it comes to materials, drywall is going to be our chief component in making the interior of this wall and these ceilings airtight. Drywall makes a nice air barrier because it’s a relatively solid piece of material. The only place you have potential air leaks is through little openings or along seams or inside corners. I’m comparing this to, say, a knotty pine tongue-and-groove ceiling. Now that’s not an air barrier at all. It’s just full of holes. So drywall to start out with is going to be a very good air barrier.

Justin: The other main materials Myron uses in this project are pretty common on most job sites: construction adhesive, latex caulk, and canned foam. Some other materials are a little less common on job sites: mainly foam boxes for sealing electrical outlets.

Myron: A good practice for any drywall job, regardless of whether you are going to do airtight drywall, is to walk through with a building contractor a few prior to the delivery of the drywall. That way you you can identify any potential problems and all that can be corrected before you actually do any drywall work.

Justin: This garage has a 2×6 bottom plate, but 2×4 studs. Before Myron came out, we placed blocks in each stud cavity because without blocks to glue the bottom of the drywall sheets to, a considerable amount of air could flow through the wall assembly.

If not already done at the pre-construction walk-through, seal all of the gaps between framing members.

Around windows, around doors, and at the gaps between king stud and trimmer, between header and top plate, and between the double – or, in this case, triple – top plates.

Myron: If the gap is wider than 1/4 inch, it’s a good idea to use spray foam instead of the caulking. It’s important to use flexible caulk, because you don’t want to use a caulk that will dry out and shrink, or maybe not even stretch and move should the structure expand and contract, because we don’t want these gaps to open up. Then there would be a passage for the air. We’ve done all the air sealing that we can at this point, so we’ll start to hang the drywall. We’re going to start with the ceiling.

If you are a GBA Pro member, click here to see episode 2: Video: How to Hang Airtight Drywall (2 of 3).

One Air Barrier or Two?

Pinpointing Leaks With a Fog Machine 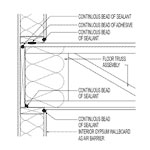 See all drawings in Detail Library