A design/build team demonstrates the durability of an ancient material

The rammed-earth construction technique is several thousand years old and is thought to have originated independently in both China, where original rammed-earth sections of the Great Wall are still standing, and the Iberian Peninsula. Other examples include the Fujian Tulou—a series of five-story round apartment buildings in China—and the Alhambra palace in Spain.

The technique has a lot to recommend it. The green-building benefits of rammed-earth homes can include low embodied energy, recyclability, high thermal mass, low energy loads, and nontoxicity. For those reasons, Terrell Wong, principal of Stone’s Throw Design in Ontario, Canada, is a fan of the material and the method. She also appreciates the durability and longevity of rammed-earth houses. When describing rammed earth to her clients, Wong says, “It is the structure, the insulation, the finish, and the thermal mass for a building. It will never need painting, and it will last 500 years, if not more.” 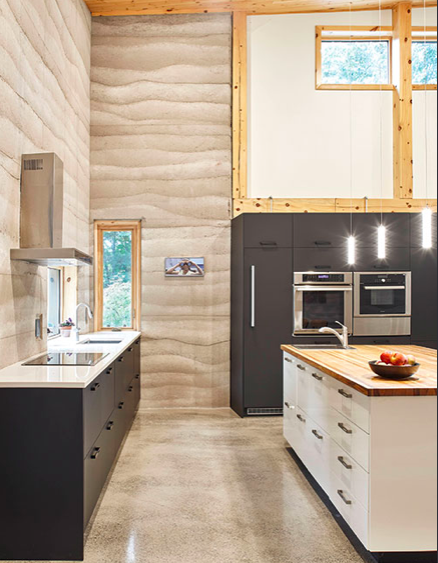 Working on the fringe

For the past 10 years, Wong has designed three to four rammed-earth houses per year. She says it’s still something of a fringe method in Canada, and notes that there are just a few builders doing rammed-earth construction in all of Ontario. One of them is Sylvia Cook, principal of Aerecura Rammed Earth Builders. Though rammed earth is often said to work best in arid climates, Cook makes this point: “The thermal-mass effect works equally well for hot climates, where heat gain is delayed, and for cold climates, where heat loss gets shifted from the middle of the night to the middle of the day, when the sun makes up the difference. This keeps the temperature consistent year-round.” In other words, when used correctly and in conjunction with climate-appropriate passive design, thermal mass moderates internal temperatures by averaging out day−night extremes. This increases…