The roof has 2×6 roof rafters 16″ OC and there is one rafter bay along the stairway (~10′ long) that has no insulation, and another that has what looks to be some R13 fiberglass batt insulation in it. The stairwell is directly behind the front door and is basically a cathedral type ceiling in that section. The right side bay has a batt of r13 in it and the left side rafter has none in it.

The horizontal line on the left side of the house spans multiple rafters and is part of the knee wall sloped section. The sloped section is is roughly 3′ long and appears to be uninsulated as well. The previous owners may have rolled up some batt insulation and stuffed it in the end of the rafter bay if you want to call that insulation. This sloped area on the second floor is part of the closet for the upstairs bedroom.

Could those areas negate all that added insulation?

We will be having the roof replaced soon, so fixing those areas via outside in is on the to do list. 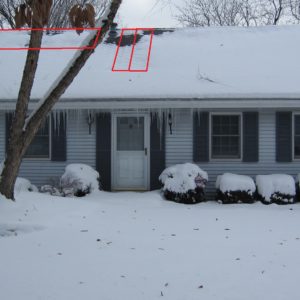 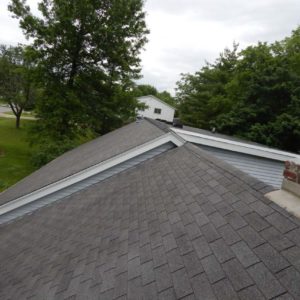