For at least four decades, scientists have been warning political leaders that we are burning fossil fuels at a rate that will lead to a planetary catastrophe. In spite of these warnings, effective reductions in fossil fuel burning have not occurred, and the concentration of CO2 in the atmosphere has increased from about 335 ppm in 1980 to about 417 ppm in 2021.

It’s almost certainly too late to avoid planetary disaster—a fact which is especially agonizing for the scientists who have spent decades warning business and political leaders of the likely outcome of our current stupidity.

In my 2017 article, “Climate Change Challenges the Human Imagination,” I quoted author Jeff VanderMeer, who said, “The normal way of dealing with issues can’t be brought to bear on this issue [climate change]. … There is paralysis at the institutional level. … One thing fiction can do is make visible what is often invisible to us.”

One new example of the type of fiction that VanderMeer is talking about is the Netflix movie Don’t Look Up. Although the plot concerns the threat posed by an approaching comet, the movie is clearly an allegory about the threat of global climate change.

An aside about a graphic novel from 1942

Before discussing the movie in depth, I can’t resist a tangential comment concerning a classic 1942 comic book, the Tintin adventure called L’Étoile Mystérieuse. Translated into English as The Shooting Star, the graphic novel’s plot prefigures the calamity depicted in Don’t Look Up. 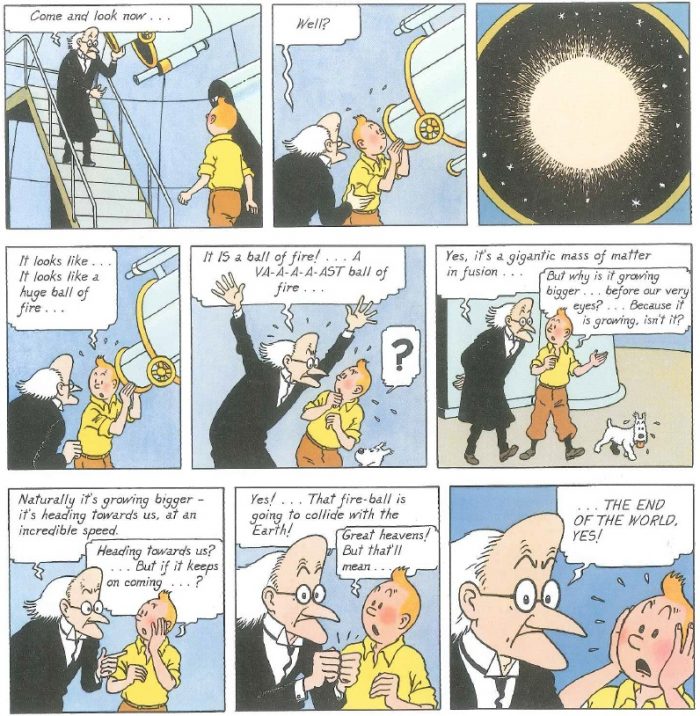 In the Tintin story, Professor Decimus Phostle (Hippolyte Calys in the French version) looks through his telescope and discovers a planetary object hurtling toward the earth. Professor Phostle is understandably alarmed at the impending catastrophe, but most of the people who hear his warnings don’t take them seriously.