An overview of devices for monitoring temperature and humidity over time

In the first post of this series, I gave an introduction to data logging as standard practice, and talked about types of problems it can help solve. Now, let’s talk products. As I mentioned, I am partial to Onset Hobo loggers. But there are a variety of data logging devices at all different price points.

The least expensive devices are off-brand versions that can be found for under $30 online. I bought one of these a few years back to test it against the brands I was using. The temperature and humidity readings seemed accurate and the unit I got was a good value. However, it seemed questionable to deliberately install some random company’s software directly onto my network-connected work computer; I decided against that and put it on my personal laptop instead. The software wasn’t that great, with few features and a dreadful user interface. Recently, I went to use that logger and realized I couldn’t remember the exact steps for starting and reading it. The instructions were missing so, rather than spend an hour or two sorting it out, I used the ones I have and know well.

I don’t know if that no-name brand is still in existence, or if they’ve continued to upgrade the software or make new hardware. My takeaway was that such a logger may work mechanically but there can come a point when there is no way to start it or download the data due to changes in computer operating systems. My guess is the 10-year cost won’t be much lower than buying something higher-end that will remain usable, and will save me from having to learn all-new software over and over.

Why We Need Building Sensors

There are some lower-cost systems made by what appear to be larger, more stable companies. Some folks at the National Home Performance Conference and Trade Show (a little plug for that show—it is a terrific place to learn) told me about the AcuRite temperature and humidity devices, which network together and cost about $15. AcuRite has been around a long time, and they sell internet-connected sets that allow for reading loggers remotely, which isn’t a must-have but can save time and energy on projects where intermediate readings can be helpful.

Sensor Push is another brand that seems to offer quality at a lower price point. Bill Robinson introduced me to these loggers, which cost around $50 each. They set up and offload via Bluetooth from a smartphone, which is a bit less clunky than the wired connections on most of my loggers. The company also carries an Internet-connection device for remote connectivity and readings. 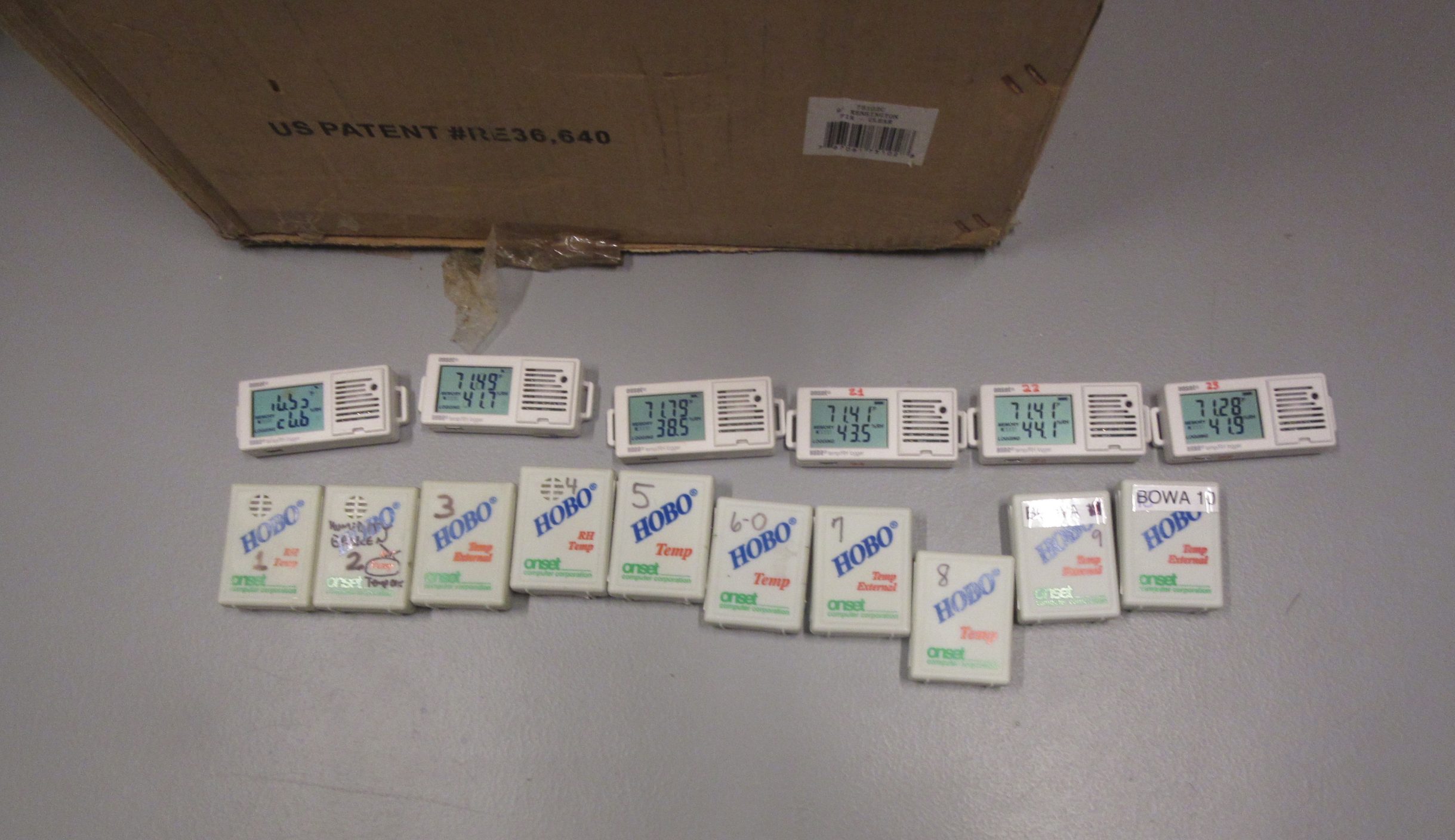 On the higher end

Most of the loggers I’ve used are Onset Hobo brand devices. In the past, I’ve paid over $150 for them but the price has fallen. These days, a normal-accuracy temperature and humidity logger is typically under $100. Not surprisingly, spending more means better accuracy. You can also invest in Bluetooth-capable units that can be read from a smartphone or via a WiFi-connected device. Overall, my experience with these has been pretty good but, as mentioned, I still use my oldest models from 20 years ago. I would guess 10–15% of the older loggers I have no longer give accurate humidity readings, but that’s not bad after 20 years. I’ve certainly been through many phones and laptops in that time frame.

The newer Onset devices that I’ve bought seem more problematic. Humidity readings are frustratingly different across eight devices; even the temperature is a bit off with a few of them. In most applications this isn’t a big a deal, but it would be better if they matched more closely, or if they could be calibrated in-house.

Omnisense is another brand worth considering. It makes sophisticated systems that are designed for contractors and building scientists. It also offers the most approachable system for measuring wood-moisture content over time. It uses battery-powered loggers that can be installed in a wall or ceiling assembly, allowing you to monitor for years via an Internet-connected base station. Omnisense also offers temperature and humidity devices. With the required monthly account expense and somewhat higher-per-device price, that’s well over $1000 for a year’s monitoring of four devices. The cost is substantially more than the standalone devices I use, which cost about $300 for four devices, with no ongoing costs.

Not worth the cost

There are two other types of logging systems that I don’t think are worth the expense. First, the lab-grade systems, which are sophisticated, powerful, and highly accurate—these are the type you see in Kohta Ueno’s presentations; they are awesome but not all that practical for the average contractor. When I researched them (to be fair, this was years ago), they were expensive and it required a significant amount of time to learn how to program them and wire the sensors.

A similar but low-cost approach is to use either a Arduino or a Raspberry Pi Pico microcontroller to monitor off-the-shelf sensors. Again, this requires a large time investment, but the hardware could hardly be less expensive—a setup with 10 sensors, the main device, and the accessories can be bought for less than the price of one ready-made logger. I’d say if you have a curious 13-year-old in your household, maybe buy $80 worth of parts and see what they come up with. I haven’t found it to be worth my time.

I create graphs for the data I collect because it is the easiest way for me to understand what I’ve recorded, as I prefer visual learning. The Onset software that came with my Hobo loggers has graphing and analysis features that I use occasionally, mostly when I’m only looking at just one or two loggers. For anything more sophisticated, I move the data over to Excel, which has graphing and analysis features I already know how to use and don’t need to spend time learning.

No matter the device, one little trick I recommend is to start the loggers together at your home or office, then take them together out to the job site. That way, they all record their first few readings in identical temperature and humidity conditions, which is a quick and simple quality check on the sensors. When you get the data later, you can verify that the first few lines read the same, and trim them off your graph.

The next post in this series will be about types of monitoring.