Of course they do

The federal government decided that after 1994 toilets shouldn’t use any more than 1.6 gallons of water per flush. Manufacturers had to comply, but by most accounts their early efforts were a flop. 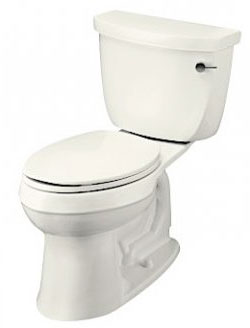 That was a decade and a half ago. The redesigned low-flow models that followed work as well or better than older models that used as much as 7 gallons of water per flush. There is, in fact, a joint U.S.-Canadian evaluation program called Maximum Performance (or MaP) that uses soybean paste encased in latex to see just how well these low-flow toilets work. And most of them work very well. Test results are easily accessible on the Internet.

High-efficiency toilets use even less water than standard low-flow models, some as little as 1.1 gallons. Dual-flush toilets, which have separate flush modes for solid and liquid waste, are another water-saving option. The differences in performance may seem trivial, but switching from a standard to a low-flow toilet can save thousands of gallons of water per year.

Replacing an old toilet with a low-flow model is a simple and fairly inexpensive way of conserving resources—a cornerstone of green building.

To learn more, see the Residential Toilets
section of our Product Guide