The Journal of Poor Homebuilding

I’m calling this collection of photos The Journal of Poor Homebuilding — kind of like Holmes on Homes, except that I won’t act like the previous contractors ought to be hunted down, predator-style.

I had some other ideas for naming it before settling on JoPH (though they are all the same basic joke): Energy Rearguard, Home Energy Amateurs, Journal of Light Destruction, or the Building Magic Corporation. (As a side note, I love the sites on which these parodies are based and highly recommend reading them).

The photo of the chimney chase is taken from above, looking down. This is a gable-end chimney on a Colonial house with a garage addition. There’s a finished room over the garage, so that chimney shaft is surrounded by conditioned interior air.

The chimney was framed in and drywalled. That light you see at the bottom is where the chimney shaft is open into the garage. On the right is uninsulated interior drywall. The cap is entirely unsealed, and the attic is insulated at the floor.

This chimney chase alone probably accounts for 5% (if not more) of the homeowner’s heating bill.

Moldy bathroom ceilings are all too common bathroom in cold climates.

The infrared picture shows where the poorly laid fiberglass batts are causing extreme dips in the ceiling surface temperature. The temperature is dipping below the dew point, causing bathroom moisture to condense. leading to surface mold growth. Yummy!

Fireplace flue without a damper

This is a New England classic. So many homes in the northern U.S. predate the development of oil and gas heating; they originally had wood heating. In these homes, chimneys were basically a giant, centrally located thermal mass that helped warm the building. 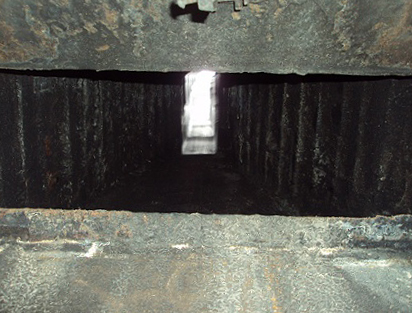 We’ve seen some of the problems with framing around the chimney. Here’s a photo inside a fireplace flue. This flue was unused and did not have a working damper. It was a wide-open 2-square-foot hole, open year-round. The leak was obvious as hell once the blower door was running, but wasn’t very obvious to the naked eye. 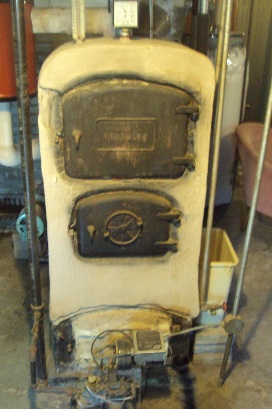 This isn’t poor home building so much as a former best practice that didn’t turn out. At one time, asbestos was a miracle substance: a great insulator, nearly indestructible in residential applications, and impervious to fire. I mean, stone fibers don’t exactly light with a matchstick.

From an energy history standpoint, this is a neat boiler. Shrouded in asbestos, it is a former coal boiler that was converted first to oil and later to natural gas. Surprisingly, the asbestos is in near-perfect shape, 60 years on.

Unfortunately, many times miracle substances are too good to be true.

This photo comes from our friends at Horizon Maine (a home-performance contractor in South Portland) who are doing the weatherization and insulation work at a home where I performed an audit. 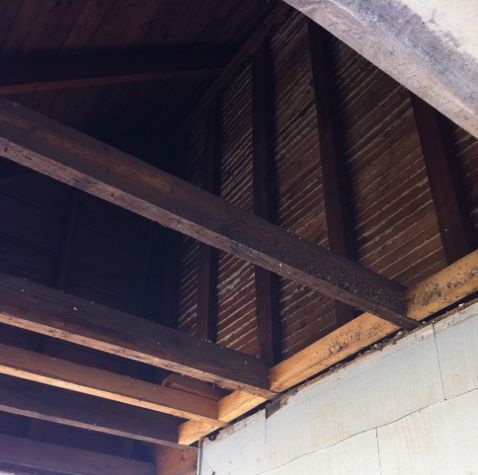 This is the space above a porch; the photo was taken after the porch ceiling was removed. There is a sitting room over the porch that the homeowner had set up as a home office. In spite of the efforts of a space heater and furnace going full blast, the temperature in this space wouldn’t get over 50°F in the winter.

Now that the ceiling has been removed, what do we see?

Oh, attic hatches … One of the most common symptoms of a problematic attic hatch is dirt and dust getting caught in the fiberglass insulation surrounding it. As some auditors say: as an insulation, fiberglass is an excellent air filter. 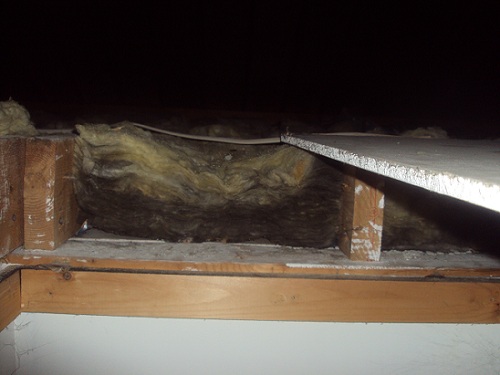 This photo shows the fiberglass batts surrounding an unsealed and uninsulated attic hatch. Years of excessive air movement has left gobs of crud suspended in the fiberglass fibers.

Erik North, the owner of Free Energy Maine, is an energy auditor and home performance specialist in Westbrook, Maine. He is also the author of the Energy Auditing Blog.