Use Plenum Trusses To Keep Ducts Out of Your Attic

If you want to do something really stupid with the ducts for a heating and air conditioning system, put them in an unconditioned attic.

In cold climates, designers, builders, and contractors know this and, for the most part, avoid it. They also have basements as an alternative location. In hot climates, designers, builders, and contractors do the really stupid thing all the time. I’ve written about alternatives in the past, but over the holidays I came across a paper showing what might just be the solution you’ve been looking for.

The Building America program has done a lot of great research on what works in high performance homes. Even better, they make the information available to all of us and publish the results on their website. One of their research partners is IBACOS, a company based in Pittsburgh, and they recently published a report titled Measure Guideline: Implementing a Plenum Truss for a Compact Air Distribution System (pdf).

The basic idea is to use a modified roof truss so you can leave your ductwork above the ceiling plane in a home but also get it into conditioned space. Before we get to the modified truss, though, let’s take a look at the standard truss.

How to Get Your Ducts Inside the Building Enclosure

Ducts in the Attic? What Were They Thinking?

There are a lot of different kinds of trusses, but a typical one looks something like the one shown above. The modified plenum truss that’s shown in the IBACOS paper looks like this:

If you look closely, you’ll see a few changes, but the main one of interest here is that open rectangular area in the middle. It creates what they call a reverse bulkhead, since it’s above the ceiling plane instead of below. That’s where the ducts will go.

How to use the plenum truss reverse bulkhead

First, IBACOS did this project with a production builder in California. The homes were all one-story, slab-on-grade, single family detached homes. They didn’t have crawl spaces, basements, or framed floor systems to run the ducts in. The objective was to get the homes to pass the 2012 International Energy Conservation Code (IECC) using the option for ducts inside the building enclosure.

Here’s what they did:

1. Install the air handler in a mechanical closet inside the house. This takes some space from inside the house, but it makes the unit more accessible and keeps it in conditioned space. 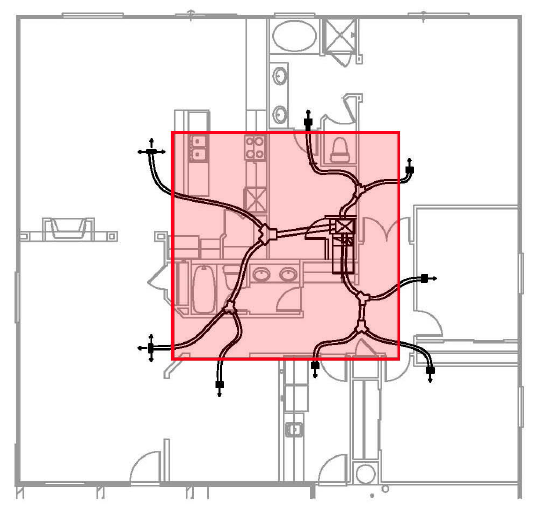 4. Put most of the ducts inside the reverse bulkhead. The IBACOS paper shows a little bit of ductwork coming out of the reverse bulkhead into the unconditioned attic. They don’t really discuss that except to say that you need to seal all the penetrations. 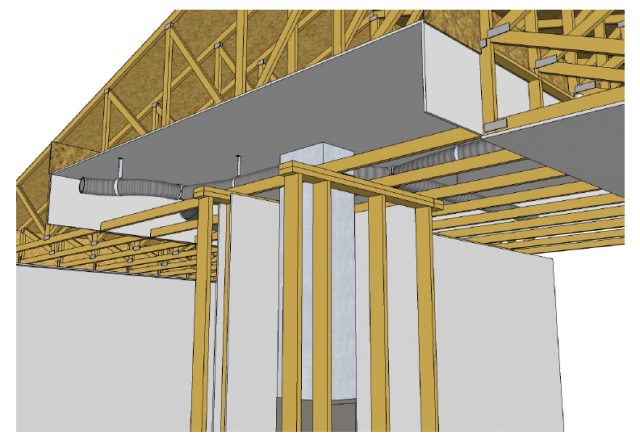 The main benefit is that you get most of the ductwork into conditioned space. You also get to do it without insulating the whole roof deck (generally done with spray foam insulation) or dropping bulkheads below the main ceiling plane.

The cost of the trusses may be higher, but that could be offset by reducing the size of the HVAC system as a result of getting the ducts inside the conditioned space. Going with a compact duct system could reduce the cost further.

IBACOS did some energy modeling and found reductions in source energy (from 123 MMBtu/yr to 112 MMBtu/yr), HERS Index (from 54 to 52), and annual energy costs (from $1274 to $1158). They’re also doing long-term monitoring of the test house and will be publishing the results of that soon, too.

If you’re building homes and still putting ducts in unconditioned attics, it’s time to adopt a new method. This could be the one that will work for you.