This recently completed 2540-sq.-ft. one-and-a-half-story single-family home is something of an experiment in new technologies. Located in Everson, Washington, the Built Green−certified 5-star project features an advanced HVAC system for low-cost air-to-water heat-pump-generated central heating, cooling, and fresh-air delivery triggered by CO2 and humidity sensors. Multiple home-automation devices also figure into the design, as do SIP construction and solar generation. Ted Clifton, founder of TC Legend Homes, is responsible for the net-positive build, which he describes as “a modern structure disguised as a farmhouse.”

The house is oriented due south and overlooks a protected Category III wetland buffer, which means only 14.8% of the five-acre lot could be built on legally. The house was sited on the high-point at the north end for optimal solar harvesting, views, and drainage. All stormwater runoff from the zinc-free metal roofs is directed to a central sump, from which the water is infiltrated into the portion of land—15% of the lot—that is allowed to be cultivated; another 21% has been granted to Whatcom county as a conservation easement in perpetuity. Overflow runs downhill into the wetland buffer and wetlands; and the septic system conducts surplus water from the main line into the wetlands. Post construction, 10 truckloads of soil were brought in to amend the compacted areas in order to encourage drainage and reestablish the runoff levels that existed when the lot was grazing pasture. 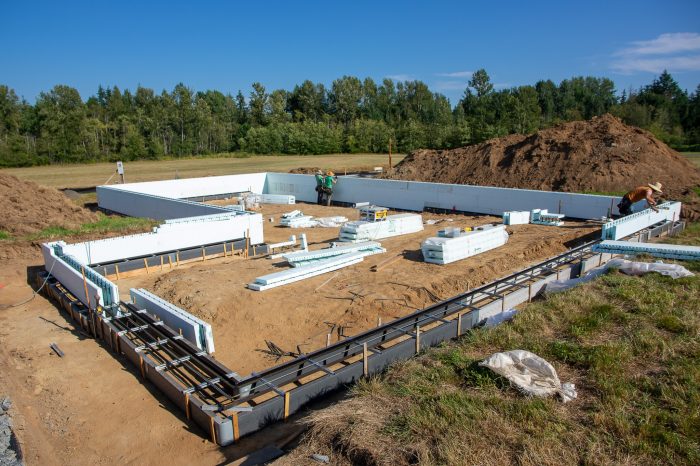 The R-20 slab was insulated with 4 in. of EPS foam, and insulated concrete forms (ICFs) were used around the perimeter foundation wall. “We’ve found ways to make the most efficient system by not under or over insulating any given area,” says Clifton, who views ICFs as a major labor savings. He has eliminated basements and crawlspaces from his projects for…