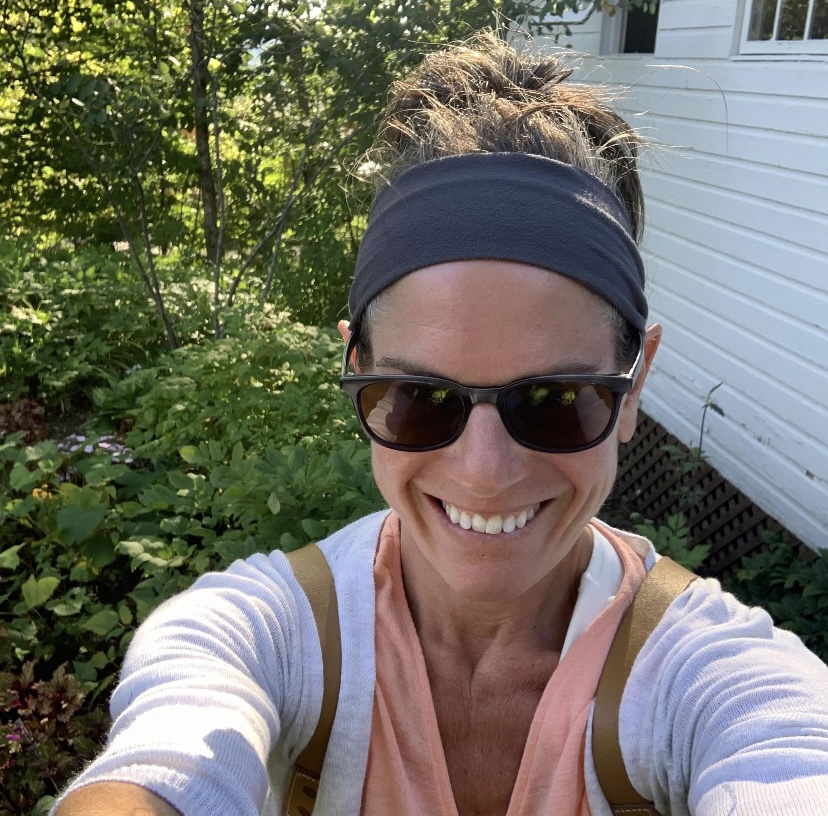 Editor’s note: This post originally appeared under the headline “Breaking the Thermal Bridge With Tstuds” in Kiley Jacques’ Houses by Design blog over at  Finehomebuilding.com. Considering all of the discussion this new product has generated here on GBA, we thought it was worth sharing Kiley’s post which offers a few more expert opinions.

“I believe in the idea of the thermally broken stud, as well as a future where the focus is on improving the performance of the first 6 in. of walls rather than simply making them thicker.”—Brad Stokes 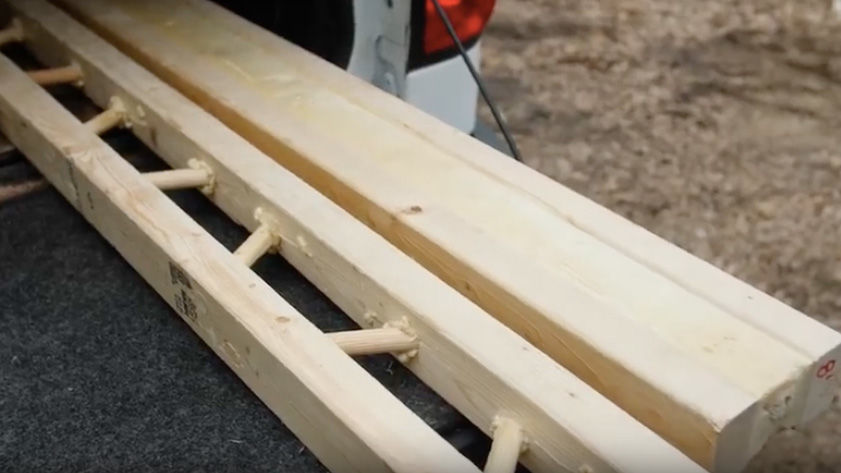 Brian Iverson, inventor of the Tstud, has stirred the pot. His 2×6 and 2×8 Tstuds are garnering a lot of attention among builders, designers, and building science nerds of all stripes. Touted as a six-in-one solution to thermal bridging in wall assemblies, the thermally broken Tstud is said to be a cost-effective, energy-saving, eco-friendly framing stud for the ultimate high-performance building envelope. The company also claims the product is easy to work with, doesn’t require any special training, and is stronger than #2 2x6s and 2x8s. That’s saying a lot. Hence, all the chatter.

A few weeks ago, we discussed Tstuds on the FHB podcast (episode 186). In response to my comment about wanting to hear from someone in favor of the product, Brad Stokes, a longtime DIY home remodeler, did some research and gave the matter a good deal of thought. “I’m mostly interested in the idea of the Tstud,” he says. “Everyone seems to be advocating for thicker and thicker walls these days, as if space is free and there is no impact on interior room dimensions or encroachment on exterior boundaries. Most of us live on a fraction of an acre and have room sizes that can’t afford to lose several inches or more around the edges—not to mention the fuss and expense of all the jamb extensions.”

Brad made some additional points that I think are worth sharing—they are good fodder for builders and designers curious about the pros and cons of this product. I also spoke with Marc Sloot of SALA Architects. He has spec’d Tstuds for a project currently underway and was able to share first-hand experience. Both Brad and Marc have responded to concerns expressed by FHB senior editor Patrick McComb, which included: cost, R-value claims, fussy corner connections, thermal bridging at the bottom plate, stud width, the two-dowel breakage limit, the 4-in. nail-gun requirement, product availability, and general complexity of the build, especially in terms of running mechanicals and plumbing.

Brad begins with cost, saying: “The economy and availability of 2×6 framing is hard to beat, but it gets expensive in real dollars to add exterior foam or a secondary wall, and to extend jambs and rework the exterior details. And that doesn’t include the penalty for those of us working with a finite footprint, and who really need those extra 3 in. to make the countertop or a queen-size bed fit in the room. What’s a few thousand extra dollars on a six-figure project if you can get more comfort, lower energy bills, and make that countertop fit? At $1000 or even $5000 more, it’s an intriguing option to consider—especially since it’s probably much stronger than my only other option of building a 2×4 wall with foam. Whether it’s this product or something similar, I am a potential customer.” 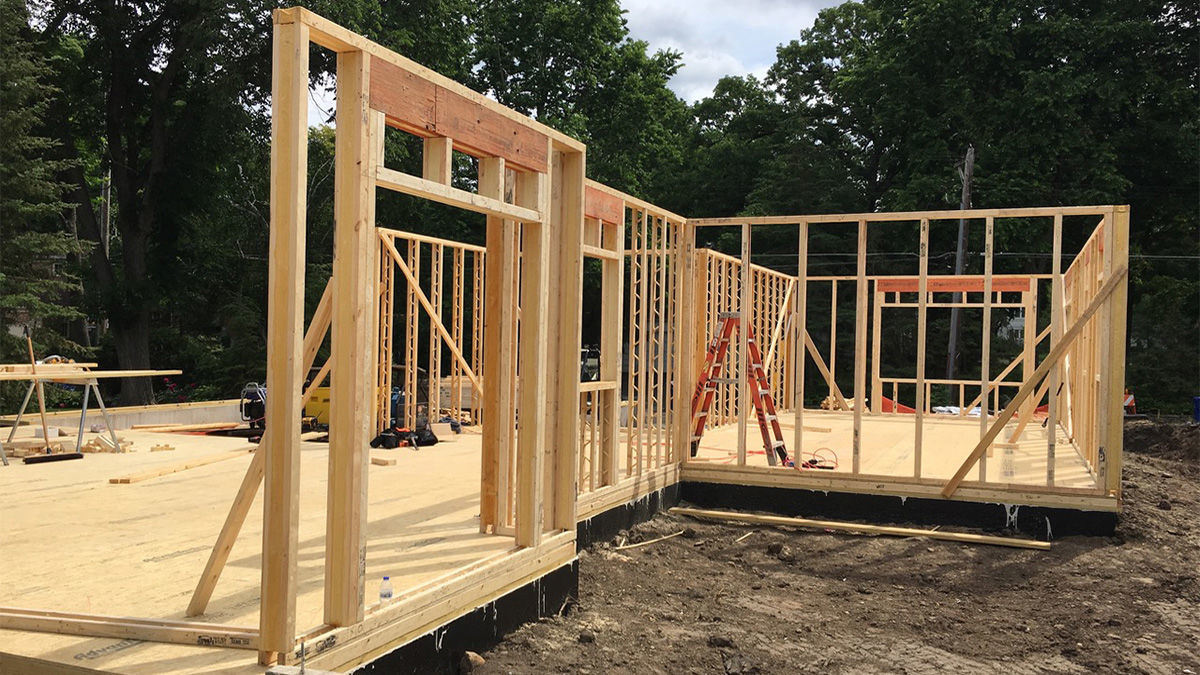 Marc’s thoughts run along similar lines. For the project pictured here—his first to be constructed with Tstuds—he was after a wall assembly with a mid-30s R-value. He considered 2x4s with exterior insulation, 2x6s with exterior insulation, conventional framing with standard interior insulation, and the Tstud assembly. “The Tstud was cost-competitive for getting to that R-value,” he reports. “It was maybe even a little less when you factor in trips around the house applying different layers for other assemblies.”

Marc views the Tstud system as the middle ground between advanced building science and code compliance. “It’s the sweet spot,” he says, noting that the Tstud wall assembly is a standard 5-1/2 in. thick, yet it creates a high-performance envelope. Additionally, he appreciates the split-stud construction—sheathing as well as interior wall finishes can be applied straight to the framing members, which, he says, make Tstuds a good choice for heavy exterior siding such as stone veneer.

Having experimented with myriad high-performance wall assemblies, Marc is familiar with the challenges of window and door openings. “You regularly need to address thermal bridging there,” he says. “Even if you are adding continuous exterior insulation, there is at least one solid framing member at those openings. There are lots of ways to do it but you get into the weeds on the complexities of how to install and fasten the units, whereas the Tstud can go right up to the edge of the rough opening. That simplifies the process and uses conventional methods that framers are used to.” (Marc sees that familiarity as one of the biggest advantages of the system.) 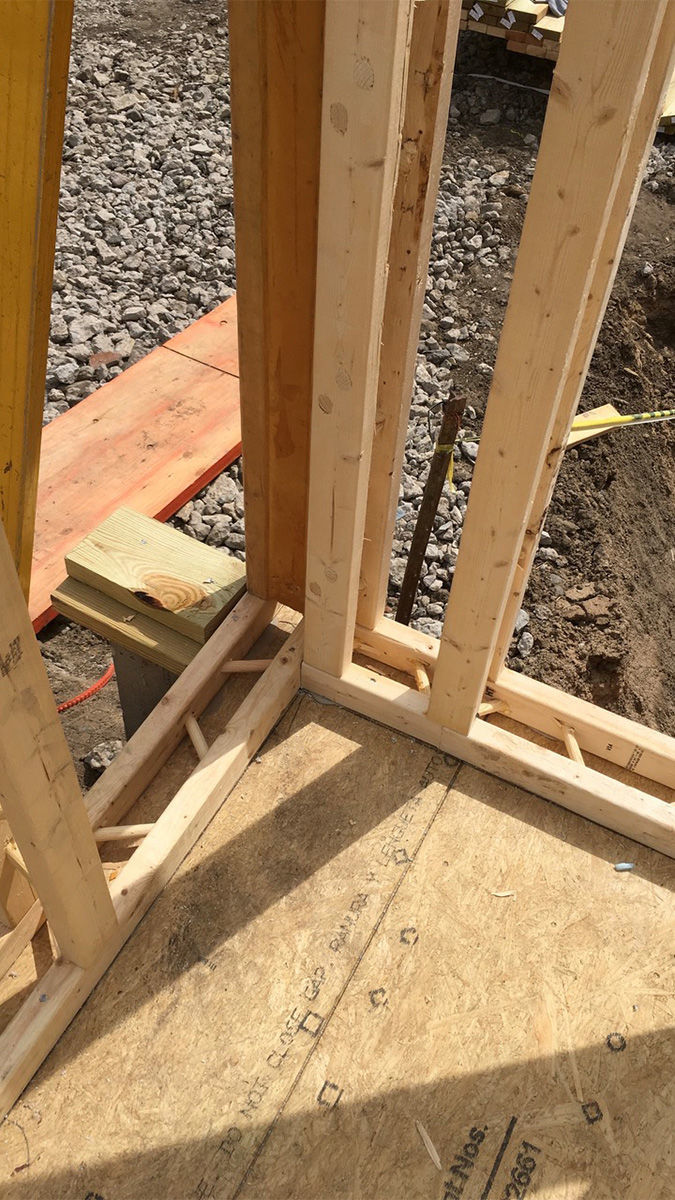 As for corner connections being fussy, Marc disagrees, saying they are straightforward. “It’s just a single Tstud on the outside corner and a 2x nailer on the inside—like a California corner—for the drywall to attach. It’s advanced framing.”

Brad concedes one trouble spot and suggests a fix. “Framing issues like the long nails could be overcome if they offered a 1-1/2-in.-thick product for the plates. I would think the structural specs for these horizontal members would be more achievable in a 1-1/2-in. thickness.” Another option is to use conventional PT 2x6s for the top and bottom plates. Brad concedes a thermal-bridging penalty there but he feels it would still be an improvement over conventional framing. When asked about Tstud bottom plates, Marc admits he used a PT 2×6 for one section of the house that cantilevers over the edge of the concrete foundation for exterior insulation—in that location he was unable to use a Tstud plate. 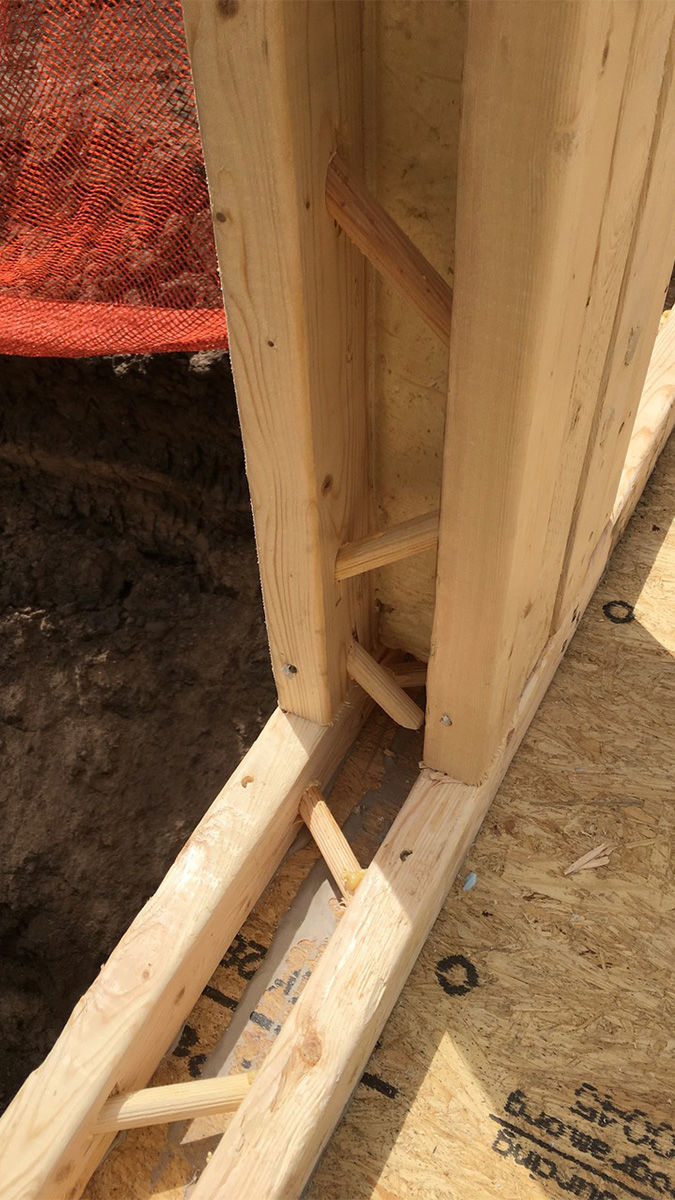 With regard to broken dowels, Marc says instructions for a field fix are supplied but he has yet to see it be an issue. “My observation is that it is not hard to avoid the dowels. You can stick a screwdriver through the foam to locate them. From an electrical standpoint, there’s no reason to break any. If someone’s breaking dowels, they are going at it with aggressive tools that are unnecessary.” Plus, he adds, in colder climates such as his, the only mechanicals going into an exterior wall are electrical, which can be run through the foam without threat to the dowels. Brad seconds that point: “In Minnesota, we rarely put any plumbing in the exterior walls—except an occasional drain/waste/vent system. It doesn’t surprise me that Brian Iverson’s company is in Minnesota—this product seems like a good fit for our climate (zone 6). I found a local builder who has built 15 Tstud homes in the last couple years, and there is a new home that just broke ground nearby that is using Tstuds.” (He is referring to Marc’s project.)

Regarding the potentially cost-prohibitive nail guns, Marc notes that larger guns, such as this one sold by Stanley Bostitch, are in the $400 to $500 range—significantly less than the $900 cited on the podcast. “If many guns are being used at one time, then a larger-capacity compressor would be needed,” he notes, “but on my project, the framers are getting by with a standard compressor.” Brad adds: “If we can eliminate the specter of the 4-in. nail gun, maybe [more people] would warm up to the Tstud.”

Tstuds are pretty new to the market, so availability is going to be a question. For this project, Marc sourced from Titan Manufacturing, an Ontario-based plant making and distributing the Tstud across North America.

Of course, Patrick has company in his naysayers’ camp, including Brad’s son, who has a unique worry. “He’s a molecular biologist,” Brad explains. “He is particularly concerned about the chemical process of forming the polyiso insulation [that goes between the dowels for the thermal break]. He questions whether it is formed in a way that is healthy and safe when installed—especially since it is inside the exterior envelope.” 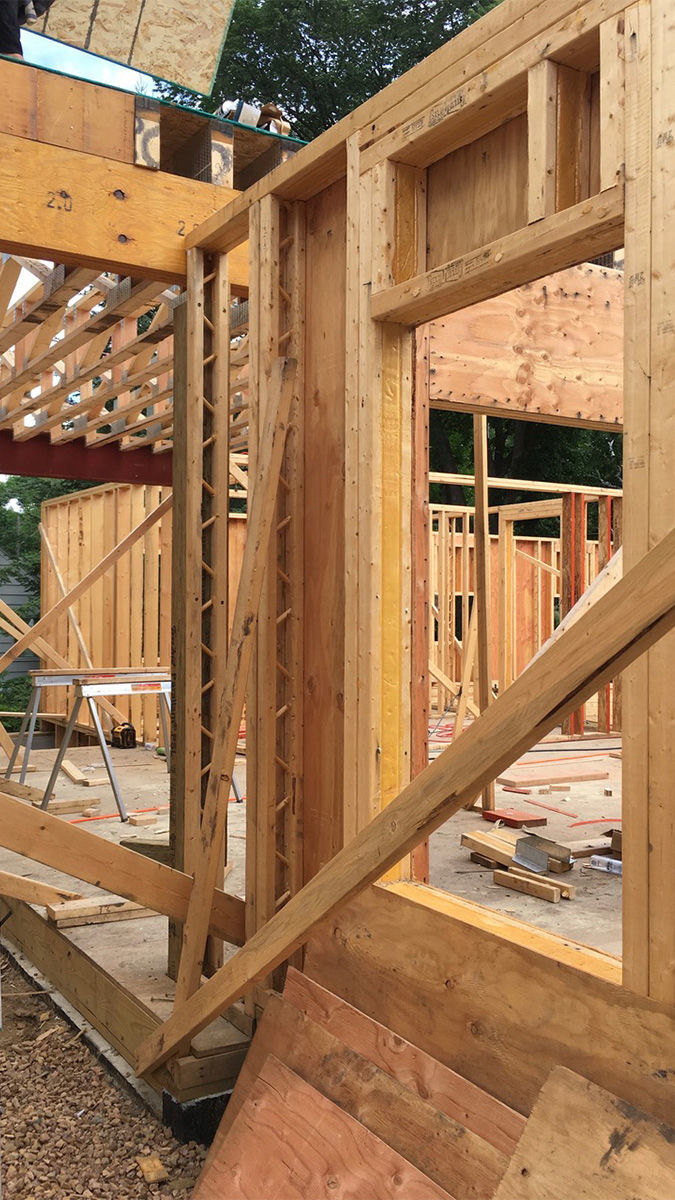 In conclusion, Marc says: “I asked the framers what they thought of the system. They said it’s a little different and they have to think about how they are putting it together, but it’s not any more difficult than stick framing. One thing they noted is the straightness of the material. They said Tstuds are consistently straight and stable. They aren’t seeing twisted studs like they do on conventional stick-frame jobs, where they typically return up to a quarter of the studs. So that’s a lot less waste.” Despite this being the framing crew’s first time using Tstuds, they are moving along as quickly as they would using traditional boards; and all of the tools used for cutting members to size are the same.

Just as I was wrapping up this post, I heard from design-build contractor Mike Maines. I had asked for his thoughts on the subject because he is a strong proponent of eco-friendly building products. He adds this measured commentary: “It’s an interesting concept and seems well-designed. They are using the least-bad closed-cell spray foam that maintains a high R-value. The thickness of the foam makes it a more effective method than more typical Bonfiglioli-type installations [the assembly Patrick favors]. On the downside, if any renovations are done in the future, unless this product gains broad market penetration, which is possible but unlikely, there is a decent chance that the system will be compromised due to lack of familiarity. Any system that requires multiple trades to change their habits is asking for trouble.” (Of course, this last point flies in the face of Marc’s argument, and it’s worth noting that Mike has not worked with Tstuds.)

Clearly, there’s something about the Tstud that warrants consideration. This video by Matt Risigner has elicited 2780 comments and counting. But will it take off? Like most forward-thinking products, it’s a wait-and-see situation.

If you have thoughts on the Tstud, please send them to [email protected].

Photos courtesy of Marc Sloot, except where noted.

For more on Tstud, try these links: