Did Our Net-Zero House Meet its Energy Goals?

Upgraded insulation and windows, plus a 9.8 kW solar array, help these homeowners realize a power surplus

Utilizing higher levels of insulation, high-performance windows, passive design, whole house electrification, and a 9.8 kW solar energy system, we were successful in being net-zero in 2019 with the house producing approximately 800 kWh more electricity than we used.

We designed our net-zero house in early 2017 and broke ground in the fall of 2017 with the build completed in late 2018. Solar panels were installed and commissioned on January 3, 2019. Now that it’s 2020 we have a full year of energy-efficient living and solar production behind us so we can see if our design achieved our net-zero goal.

The design included double-stud walls insulated to R-35 with low-density spray foam, a raised hip roof with attic insulation to R-90, triple-pane R-7 windows, sizing and organizing the windows to capture the winter sun with roof overhangs to block the summer sun and a concrete first-floor slab to store thermal energy (passive design).

To Net Zero and Beyond

Everything is electric—from the stove to the home heating system—and a 9.8 kW solar energy system was installed on the roof. The first indication that our design might be successful was the blower door test, where we achieved an 0.62ACH50. That indicated the house was very well sealed and we would not be losing much energy to infiltration.

Based on these calculations, our HERS score came in at 33 without solar and -3 with solar. The HERS score of 33 indicates that we would use 67% less energy than a comparable reference home of our size and the -3 score indicates the house would produce more energy than it used every year.

Solar predictions right on the money

How did the house perform? We ended up using 10636 kWh in 2019, which is amazingly close to the 10,905 calculated by XRG. Our solar panels generated 11434 kWh which was approximately 1000 kWh fewer than predicted, but we had really low numbers in January and February of 2019 due to overcast skies and snow on the panels. This means we were net-zero in 2019 with the house producing approximately 800 kWh more than we used.

We went net-zero on June 23, 2019. Our winter use of 41 kWh/day put us in deficit due to the lower solar collection and high heat-pump use to heat the house, which then reversed in summer when we produced much higher solar energy (40-60 kWh/day) and did not have to heat the house, therefore using only 23 kWh/day. We were net-zero eight months out of the year, with January-February and November-December being our only deficit months.

Since we did not use the heat pump that much in summer to cool the house, the summer kWh can be used as our typical whole-house use when not using the heat pump (23 kWh/day). That helps us calculate that we used 2200 kWh for heating during the year. At a more conservative 22 kWh/day the calculation would be 2600 kWh/year for heating.

In addition, we used 1087 kWh to heat our hot water, which is in line with 1340 kWh predicted by the Energy Use Guide that came with the heater. This is probably for the average four-person household. Overall, then, you can see that heating took up around 20% of our energy use while hot water was 10% and other appliances like clothes washer/dryer, stove, computers, etc. took up 70% of our energy use.

Typically when its sunny out our solar panels produce way more than we need so in reality most of our solar power is sent to the grid for others to use. In 2019 we only used 30% of our own solar power and shipped the other 70% to the grid. It would be nice to have significant battery storage so we could use more of our own solar power. Some combination of car battery and wall mounted battery in the 60-80 kWh range would be great. The addition of an electric car would use about 14 kWh per day, or 5000 kWh a year, assuming we drove 20,000 annually.

Being off the grid not practical for us

We, of course, incur significant costs for being tied to the grid. It would be nice someday to be totally off the grid, but is not really practical for us because of the large shifts in energy use from winter to summer. 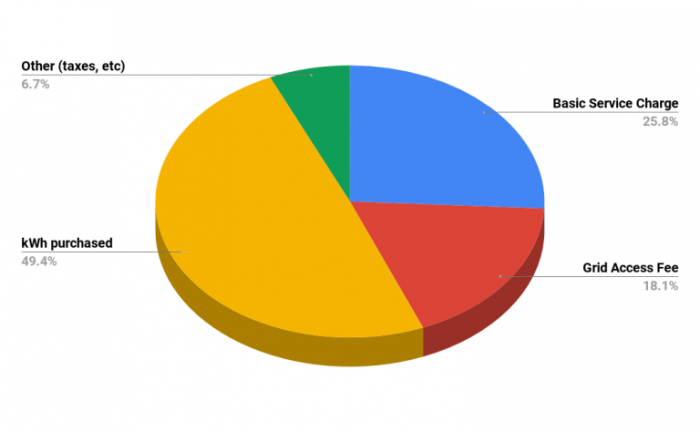 One final calculation is how energy efficient is the house to heat relative to its size and the number of heating degree days (how cold was it). This is calculated as kWh used to heat/size of house in square feet/HDD. Based on a more conservative 22 kWh base use load (we used 23 kWh above) we used 2606 kWh to heat last year, the home is 2100 square feet of conditioned space (if you include the basement), and there were 8561 heating degree days in 2019. So, 2606 kWh/2100 square feet/8561 HDD = 0.000145 kWh/Ft2/HDD.

This is comparable to the Up-Hill house in upper New York which came in at 0.000154 kWh/Ft2/HDD (smaller the number the better) and on the low end of the high performances homes built by Transformations INC. These homes averaged 0.00013 to 0.0004 kWh/ft2/HDD, with most being approximately 0.00025 kWH/ft2/HDD when basements were included. See our previous post on how I calculated our possible heating use.

This post is part of a series describing the construction of a net-zero energy house in Rochester, Minnesota, by Tracee Vetting Wolf, Matt Vetting, and their son Max. Photo and illustrations courtesy Matt Vetting and Tracee Vetting Wolf. You can find their complete blog here. A list of their previous posts appears below.

Other posts about the Minnesota Homestead:

Why We Built an Energy-Efficient Home

Energy Planning for a Net-Zero Home

It’s Not All Sunny in Net-Zero Land