I recently investigated an attic with spray foam insulation where we observed an interesting humidity pattern. We placed data loggers near the ridge and floor of the attic as well as in the living space and outdoors.

The graph at below shows dew point data for the four locations. The really interesting part is the big difference in dew point between the highest and lowest points in the attic, shown by the red and green curves in the graph. 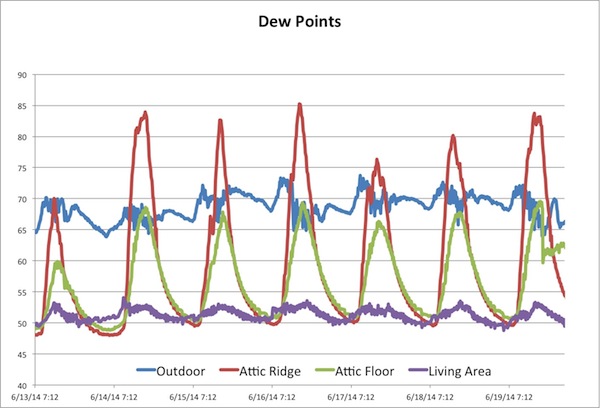 Let’s take a look at the data for the ridge and floor in separate graphs now. The next graph shows the attic floor, and this time I’ve included the relative humidity. As you can see, the humidity, as measured both by dew point and relative humidity (RH), goes up during the day as it gets hotter outdoors and down at night when it cools off. But the humidity near the attic floor never gets out of control. The dew point and RH stay below 70° F and 70% at their peak (the peak of humidity, not the peak height in the attic). 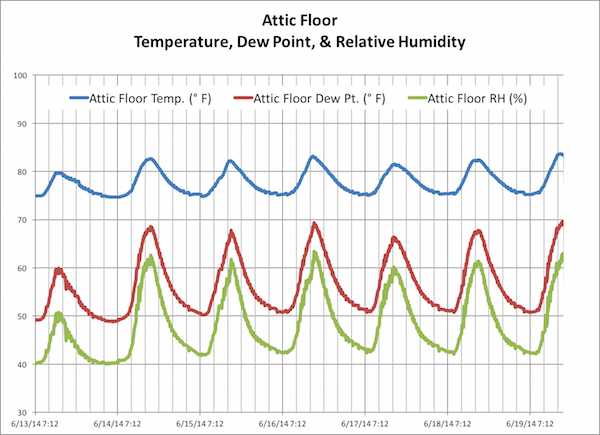 In contrast, the humidity near the ridge in the attic gets very high. The dew point and RH get up close to 90°F and 90%. That’s way too high. On the bad days, when it’s sunny outdoors, the RH stays above 70% for about eight hours per day and above 80% for more than four hours. Not good! 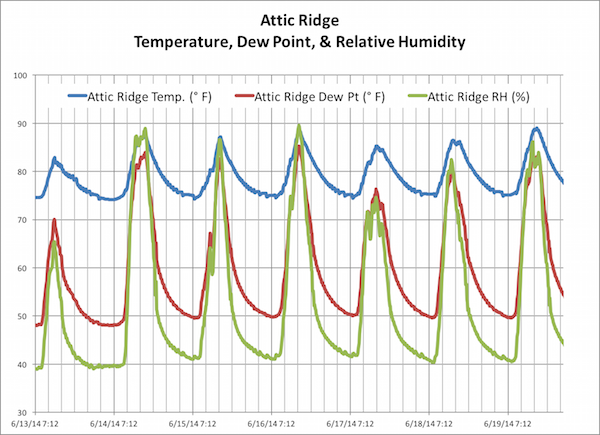 Why is this happening?

This has been a topic of conversation in Joe Lstiburek’s backyard at Building Science Summer Camp for the past three years. In 2014, Foster Lyons, Joe, and I talked a lot about this. Foster, in fact, kept pressing for better explanations and is the one responsible for Joe’s latest article, Ping Pong Water and The Chemical Engineer.

Foster is the chemical engineer alluded to in the title. He loves to talk about chemical potential, which is part of his explanation for what’s going on. If you want a more detailed explanation, including discussion of sorption isotherms and pressure swing adsorption, go read Joe’s article. I’ll give a more simplified version here.

What happens is that moisture makes its way into the attic. This could be from cooking, bathing, and breathing below. It could be from the very humid crawl space. It could be from some mystery source. In the living space of this house, the air conditioner and dehumidifier handle the moisture load and keep the humidity under control. In the attic, there’s nothing to remove the water vapor that finds its way up there.

At night, the roof cools off. The cool OSB roof deck then offers refuge to the water vapor. Wood is hygroscopic, meaning it’s a porous material that can pull water vapor out of the air and store it on the surfaces and in the pores. The lower its temperature, the more it can store.

So all night long, the roof deck is cooling off and storing moisture. When the sun comes out the next day and starts warming the outdoor air and radiating down onto the roof, the roof deck warms up and drives the moisture out.

When the water vapor exits the spray foam, it increases the relative humidity of the layer of air near the foam. Because water vapor is lighter than dry air (mostly nitrogen and oxygen), that layer of air can move upward in the attic. The result is higher humidity at the ridge than at the floor. Lstiburek calls this the ping-pong effect. The water vapor pings and pongs its way to the ridge through the daily cycling.

The role of open-cell spray foam

Open-cell spray foam insulation doesn’t store the moisture. It’s just a pathway. It has a relatively high vapor permeance (~3 perms), allowing water vapor to migrate to the roof decking at night and back into the attic air in the daytime. It’s the wood decking that stores the moisture. 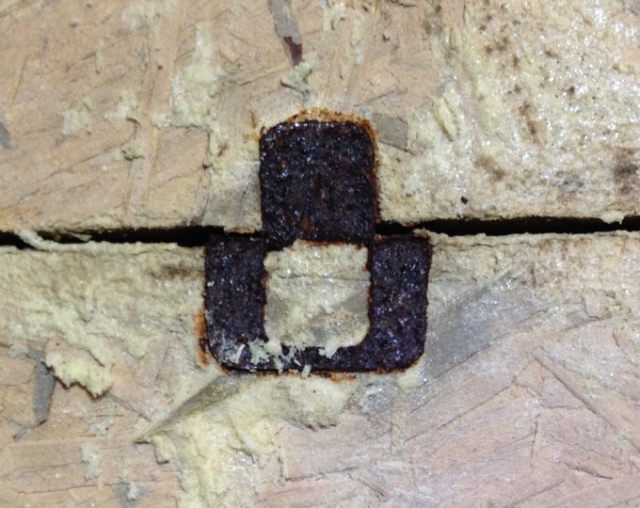 The photo at right shows a rusty OSB clip in the same house. They had the foam removed and replaced here (because of an off-ratio installation when it was first done) and I got a chance to get up there and inspect the roof deck. I saw a lot of rusty nails and OSB clips. I also saw places where the nails and clips weren’t rusty.

But the corrosion here indicates that moisture was indeed migrating through the foam and finding the roof deck. Well, at least most evidence points in that direction. In an article from a couple of years ago, I wrote about Joe Lstiburek’s research on different underlayments on top of the roof and how he showed that the moisture in the roof deck was not coming from above. The humidity data above show that there was plenty of moisture below. The conclusion is pretty simple. The moisture comes from below.

So, how do you fix this, or better yet, prevent it? Well, let’s look at prevention first. If the problem is moisture migrating through relatively permeable foam, you can make it less permeable. Put a vapor retarder on open-cell spray foam. That’s actually required in Climate Zones 5 and higher. Or you can use closed-cell spray foam. Those options would slow down the moisture migration and prevent the problem.

If you don’t do that, you’ve got to reduce the amount of water vapor in the attic. You can do that by directly conditioning the attic with supply air, by blowing conditioned air from the house into the attic, by exhausting air from the attic to outdoors, or by using a dehumidifier.

In his article, Lstiburek mentioned that he had this as a code proposal. I just spoke with him and his proposal passed, so this will be acceptable in the 2018 International Residential Code. Note that it applies only to Climate Zones 1, 2, and 3, though.

The upshot of all this is that open-cell spray foam installations have to change. The days are over when you can spray open-cell foam in an attic, close it up, and walk away. We know now that this can cause problems.