How to Insulate the Attic in a 1910 Remodel

Tim Lange is taking on a major renovation of his 1910 home in North Dakota that will include a new roof, exterior spray-foam insulation, and new doors and windows. His quandary is what to do in the attic.

“I think I’ve got a good handle on the exterior insulation process — using window bucks to create an ‘outie’ style window is the current plan,” Lange writes in a Q&A post at GBA. “The third floor and attic are where I need some help.”

Lange is considering a number of possible approaches. “For the area behind the kneewall,” he writes, “one option would be to remove the fiberglass, add a layer of spray foam against the roof sheathing and finish with dense-packed cellulose to get the desired R-value,” he writes.

“I don’t see a way to effectively insulate the sloped section of the ceiling,” he continues. “There is just not enough room and it can’t be accessed easily. I suppose we could remove this part of the ceiling, fill the cavity with spray foam, then Sheetrock back over the foam. UGH. One suggestion was to dense-pack the area behind the kneewall and in the sloped ceiling area and pile lots of loose-fill in the main attic area. Not code-compliant, I know. But they do it out East.”

How to Install Rigid Foam On Top of Roof Sheathing

He could gut the third-floor attic to remove all the lathe and plaster, then spray-foam the underside of the sheathing to R-49 — that’s what’s recommended for his Climate Zone 7 locale — or spray 1 inch of foam and fill the rest of the cavity with dense-packed cellulose. Finally, he could ventilate the underside of the sheathing with a 1-inch air gap using rigid foam.

There are plenty of possibilities. What’s his best plan of attack? That’s the topic for this Q&A Spotlight.

Foam on top of the roof sheathing is the best option

“By far the best solution is to install one or more layers of rigid foam above the roof sheathing, followed by an additional layer of OSB or plywood and new roofing,” GBA senior editor Martin Holladay tells Lange.

Spraying 1 inch of foam on the bottom side of the roof sheathing and then using cellulose won’t work, Holladay says, because the minimum R-value for the foam layer in this type of construction is R-30. To get that kind of performance, Lane would need to install 5 inches of closed-cell foam, followed by enough cellulose to get to R-49.

Using 2 inches of closed-cell foam on the underside of the roof deck would protect the sheathing, writes Dana Dorsett, but Lange would still need a smart vapor retarder on the interior or some foam on the exterior if he planned to augment the foam with cellulose.

“The polyiso would underperform its labeled R-value in winter, but it would also be thermally breaking the rafters, so the performance loss isn’t too terrible,” Dorsett continues. “For minimal dew point control, a minimum of 2 inches exterior + 2 inches of closed-cell on the underside would be good insurance.”

Holladay says that using 2 inches of closed-cell foam instead of 5 inches would violate a section of the 2012 International Residential Code dealing with unvented attic assemblies.

“It’s not technically a violation and will be pretty safe as long as there is also exterior foam. It’s more of a gray area,” Dorsett replies. “The 2 inches of closed-cell foam is a Class-II vapor retarder, which is sufficient to protect the roof deck from interior moisture drives, and with a couple of inches of rigid foam (of any type) above the roof deck, there would still be dew point control at the first condensing surface, which is the interior side of the spray foam.”

Although this method would not be the best option in new construction, Dorsett continues, it’s about “as good as it gets in a retrofit with 5 1/2 inches of rafter depth.”

Dorsett points to an article published by the Building Science Corporation suggesting that his plan would work.

“This does not provide control at the foam/fiber boundary without interior vapor retarders, though, but adding sufficient exterior foam does,” he says. “Putting a bit more R-value on the exterior would also raise the average temperature at the roof deck, further lowering its (already vapor-retardancy-limited) wintertime moisture accumulation.”

Limiting the amount of interior spray foam to 2 inches gives the roof deck some capacity to dry toward the interior, Dorsett says.

One thing that’s been nagging Lange is that using spray foam on the underside of the roof deck would make it difficult to spot roof leaks.

“Will leaking shingles eventually allow water to drip through the spray foam and onto the ceiling below — giving notification that the shingles had a leak?,” he asks. “I’m concerned that the spray foam will hide a bigger issue and instead of replacing shingles, would then need to do shingles, sheathing and possible rafter fixes.”

The same concern would apply if Lange were to add rigid foam insulation on top of the roof deck, followed by a new layer of sheathing. “If the shingles are leaking,” he asks, “how does the owner notice this?”

That, says Holladay, is the risk he runs with that type of assembly. “If you want early detection of roof leaks, you want a house with a vented unconditioned attic,” he says. “If you decide to insulate along your roof slope, to bring your attic inside your home’s thermal envelope, you lose the ability to detect roof leaks early.

Insulating the attic from the inside alone

Screwing through 10 inches of foam placed on top of the roof deck and hitting framing members accurately seems a little dicey, so Lange has come up with an alternative that calls for a combination of spray foam and rigid insulation that can be installed entirely below the roof deck.

After gutting the interior, he would create a ventilation channel 1 inch deep below the roof deck with rigid foam, and fill the rest of the cavity with closed-cell spray polyurethane, for a total R-value of 27. Next he would install 4 inches of continuous extruded polystyrene (XPS) applied below the rafters in the cavity behind the kneewalls and on the sloped section of ceiling on the other side of the kneewall.

In the center section of the attic ceiling, where Lange doesn’t want to give up any headroom, he would install 4 inches of foam board on top of the horizontal ceiling joists. To keep the R-value of the various sections of the roof assembly fairly uniform, Lange would add 3 1/2 inches of spray foam in the spaces between joists in this center section. Using foam board instead of blown-in cellulose would retain a narrow crawl space for inspecting the roof.

But, after talking with his spray-foam installer, Lange has decided to use baffles in the rafter bays from the soffit to the open space above the ceiling joists — an easier ventilation option than making baffles on site with 1-inch XPS board.

Lange also thinks that introducing a thermal break on the underside of the rafters is worth considering. That would be in the form a furring strips, spaced out from the rafters by 1 inch, and the gap filled with spray foam. It would cost him $1,275 for this 1-inch-thick thermal break, in addition to the 4 inches of spray polyurethane foam already planned.

“It’s hard to calculate the return on investment for this added insulation,” he adds, “My gut feel is do it — we have come this far. I’ll be installing the furring strips, so the labor is basically free.”

Even with the added 1 inch of foam, the total thickness would be 5 1/2 inches, or R-35.75 at R-6.5 per inch. That’s less than the R-49 required by code, but the plan apparently has the blessing of the local building inspector.

Here’s what GBA technical director Peter Yost has to say:

There certainly are a lot of moving parts in this roof/attic insulation discussion, so I finally decided to make a quick drawing — crude as it may be — of the “final” configuration (see below). 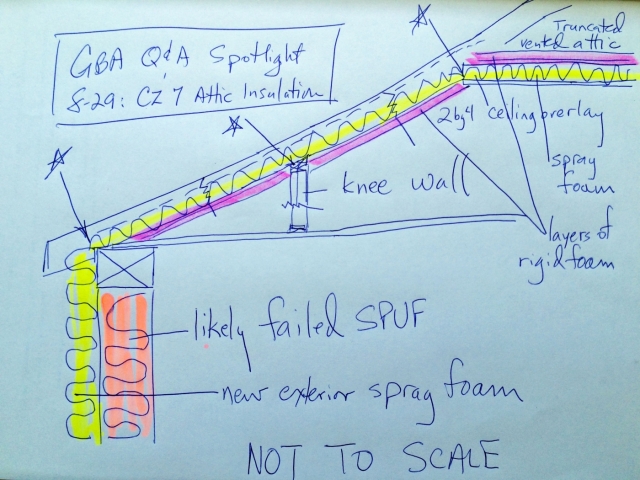 Here’s the color key (marker color selection is no more meaningful than what I could find on or near my desk):

And I wanted to focus on these issues:

Venting/ventilating the roof and attic. I like where this landed finally, with soffit-to-ridge ventilation on the underside of the roof deck. In general, the difference between venting and ventilating is the latter conveys actual air movement (soffit to ridge, driven by stack effect convection) with the former only supporting gable-to-gable diffusive drying potential. (I know that gable-to-gable air movement can be increased by wind forces, but in my experience this happens precious little, especially in truncated attics like this one).

This roof/attic assembly has good-to-excellent drying potential for the roof framing and sheathing to the exterior with this ventilation of the underside of the structural roof assembly.

Air barrier continuity. This was not really covered in the Q&A exchange, but again, in the final configuration there is good continuity throughout the roof/attic assembly. Note that particular attention is needed to connect the spray foam air barrier at the spots on my drawing marked by stars.

One way to deal with the middle starred point is to redo the kneewall framing after the rigid insulation is in place, screwing the angled top plate of the kneewall through the foam into the rafters. This completes the thermal break of the rigid foam on the sloped portions of the assembly as well.

Thermal bridging. This final configuration has this covered well, too, even if it flip-flops or jumps at the sloped/flat ceiling transition.

Drying potential of flat ceiling. Depending on the rigid insulation chosen to be on top of the ceiling overlays, keep the interior sheathing and finish vapor-open to accommodate drying to the interior of this portion of the attic/roof assembly.

Caution on the depth of closed-cell spray foam lifts. How deep closed-cell spray foam can be installed per pass is dependent on the spray foam manufacturer and its particular recommendations or requirements. The depths in this roof/attic assembly are just deep enough for this to be a concern, almost regardless of the manufacturer or product. I hope this goes without saying, but always use a certified company and installer (complying with ABAA or SFPA certification programs) for any spray foam product (since this type of insulation is site-manufactured).

Sprayed urea formaldehyde foam (SPUF). This is really nasty stuff. In my remodeling days in the Northeast, I never encountered SPUF that was not seriously deteriorated in composition and volume, with its insulation value (and even more important, its airtightness) also trashed. I’m not sure how much of its original R-value you can count on to augment the exterior spray foam in the exterior walls. But I am sure that no one looks forward to having to gut this building’s exterior walls in addition to the second story…