In Massachusetts, Alexi Arango and LeeAnn Kim are building a new home that aims for net-zero energy performance and compliance with the Passivhaus standard

As they set out to build a single-family Passivhaus on Potwine Lane in Amherst, Massachusetts, Alexi Arango and LeeAnn Kim asked themselves, “Is it possible to live without burning fossil fuels?” One measure of success would be meeting their goal of net-zero energy performance. In this first blog in a planned series, Arango reports on the start of their project.

In retrospect, it was not a wise decision to build this house. It’s been over a year now of endless catastrophe — an emotional up and down of “Wow, this is the best thing ever” to “How did I get myself into this anxiety-producing, money-losing, relationship-killing mess?”

I consoled myself by walking down to the bridge to take in the beautiful landscape, until the beavers moved in and flooded the place. Then it was the apple orchard, a delightful spot in the spring in full bloom, until I arrived to find three trees chopped down.

Securing the loan and signing the construction contract was a difficult process; long and stressful, with many painful financial decisions — everything about the entire house had to be fully specified. Now, in spite of all this, a permit is likely to be issued soon, and once that happens the project is set to begin — ushering in a smooth, effortless and faster-than-expected building phase; I’m sure of it.

Inspired by the BrightBuilt Barn

My own inspiration to build a Passivhaus came when I met Keith Collins at an MIT Energy Conference in 2009. I was awestruck by Keith’s story of how he built the BrightBuilt Barn, a net-zero home in Maine that shockingly doesn’t have a furnace — doesn’t need one, to be precise, even in the winter.

What? How is that possible?

Amazingly, body heat, residual heat from the lights, and solar gain during the day are sufficient to keep the BrightBuilt Barn warm. For years, I kept the postcard from Keith on my desk and, later, pinned it on my fridge, slowly nurturing the dream of one day building my own BrightBuilt Barn.

And here I am, anxiously waiting a building permit from the town of Amherst before it gets too cold and the ground freezes. The Potwine Passive House is a modified version of the BrightBuilt Barn, slightly larger and revised to function seamlessly as a stand-alone residence.

December 8, 2013: An overwhelming desire for a healthier environment

We — our society — are observing the slow-motion decay of the world to the point where the next generation will be left with a planet that is barely hospitable to life.

Even though many awesome solutions exist that could be implemented right away — high-speed trains, bikeable cities, solar panels, wind energy and zero-energy homes (sure, there are enormous challenges) — armies of lobbyists, media figures, politicians and executives are standing in the way, unable to set aside their own small self-interests for the greater good of humanity and the ecosystem. Despite an overwhelming public desire for a healthier environment, we are held hostage by a tiny minority of plutocrats. It feels like there’s nothing we can do about it.

When we talk about zero-energy homes, many of the complicated pros and cons fall away and the discussion turns more hopeful. Owning your own home is a mainstay of the American dream. We can all easily picture adding more insulation to the walls, upgrading the furnace to a heat pump, upgrading the windows to triple-pane, and replacing the stove with an induction cooktop.

The cost savings are modest, but the energy savings are enormous. No birds are harmed in the process. There’s no nuclear waste to contend with. Relatively few entrenched interests stand in the way. To me it’s a demonstration that real solutions exist, that they are practical and can have a profound impact without requiring undo sacrifice or shifting the burden elsewhere.

The project has been super cool and fun; there’s something about a technologically sophisticated house that really captures my boyish imagination: building stuff, doing it ahead of the curve, and with a laudable purpose.

Some of my new neighbors might be curious about the activity on their street, so I made up this postcard that I’ll drop in their mailboxes. I thought it would be nice to let them know what’s going on, but really I’m interested in getting started on my ambitious plan of world domination — by convincing everyone to live in ultra-efficient tiny houses!

Here are some of the most striking energy efficiency features of the Potwine Passive House, as listed in the postcard: south facing windows capture heat from sunlight during the day; a concrete floor absorbs the heat and releases it at night; highly insulating (R-50) walls and triple-pane windows (R-6) help keep the heat in; a heat-recovery ventilator and a heat-recovery drain pipe help conserve energy; and LED lights save electricity while looking great. I’ll talk more in depth about these features in future blog posts.

The whole house design hinges on a south facing structure. Unfortunately, you can’t just use the compass in your iPhone to figure out which way is south. A compass points to the magnetic south (which is strangely enough the north end of the earth’s magnetic dipole), but we want to point the house toward the sun — midway between sunrise and sunset — often referred to as “solar south.” This will ensure that the south face of the house is exposed to sunlight symmetrically — the same amount of sunlight in the morning as in the afternoon.

Mary (a friend) and I went out to the lot at midday (which happened to be at 11:45 a.m., halfway between sunrise and sunset), and we put the thin green stakes in the ground in line with the shadow cast by sun to indicate the direction of solar south. The next day, Kyle (the builder) and I placed the wooden stakes with orange streamers at the four corners of the home. The footprint looks so small! That’s what went through my mind when I saw the 26 ft. by 26 ft. square, the location of the outside corners of the walls. I wonder if it will feel too small when it’s finished. Oh boy. 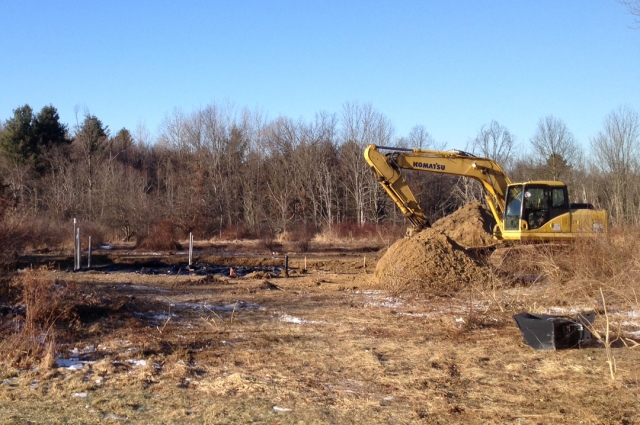 The topsoil was removed and the remaining soil was compacted. You can see how the water, sewer, electrical, PV and communications conduits and stub-ups are already set into place. Hay with black plastic on top are keeping the ground from freezing. 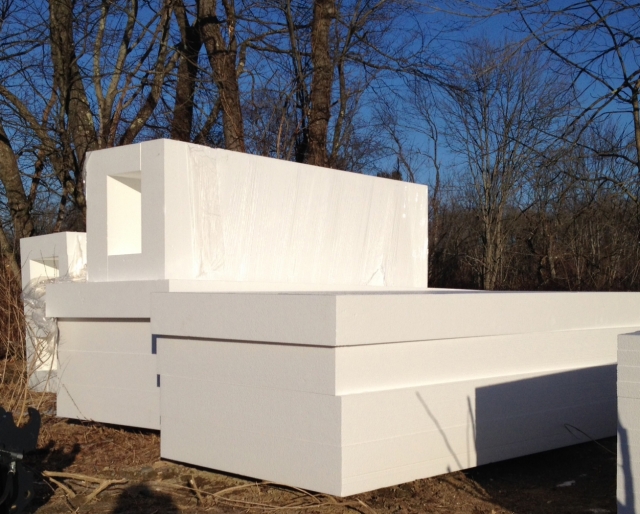 The EPS foam has been delivered. Once the structural fill is put down over the compacted dirt, the EPS foam will be laid down and will serve as a container in which to pour the concrete. The resulting concrete slab will be the downstairs floor inside the home.

I got a text on Wednesday from my neighbor Jesse saying “concrete!” and I dropped the grant proposal I was editing and raced over to the lot. When I showed up, though, I realized that it wasn’t concrete — even though it looks like concrete and the truck probably looked like a concrete truck — it was the flowable fill. 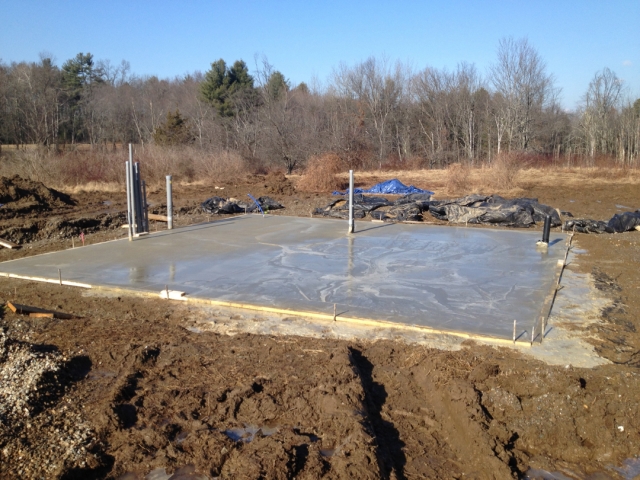 What’s flowable fill? It’s a thin layer of cement, sand and water mixture that provides at flat, smooth and void-free surface. It’s not as strong as concrete, but doesn’t need to be: it’s simply a more convenient option than trying to smooth out the base layer of structural fill (the compacted sand/gravel mixture). The various pipes that you see sticking up are the electrical lines and water lines (in the center), the sewage drain (on the right) and the conduit for phone, electricals, cable and some other mysterious stuff that I don’t know about (on the left).

The image that appears at the bottom of this article shows the cross section of the whole foundation, called a frost-protected shallow foundation (FPSF). The illustration comes from a Journal of Light Construction article written by Alan Gibson, co-owner of GOLogic. In the article, Alan describes the cost savings of a slab foundation, the site preparation requirements, the foam insulation requirements and the technique for pouring the concrete. 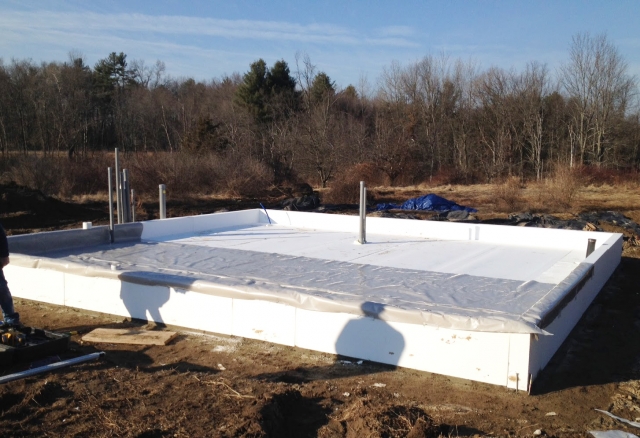 On Friday, Don (the carpenter) and Jim (his helper/painter) installed the expanded polystyrene (EPS) foam.

They fit the foam pieces together like a jigsaw puzzle on top of the flowable fill and reported that it was relatively easy to set everything in place. The 8-inch-thick foam pieces are apparently heavier than they look. The raised side wall will insulate the side of the concrete slab while also creating a bowl in which to pour the concrete. You can see that half of air-vapor barrier has been laid down already. Next week, hopefully, we’ll get to pour the concrete.