Vapor Profiles Help Predict Whether a Wall Can Dry

To avoid moisture problems in walls, think about the permeability of all the wall’s components — not just the “designated” vapor retarder

Today’s walls, roofs, and floors are better insulated, tighter, and made with a much greater variety of components than they used to be, making them a lot more susceptible to moisture problems when they get wet. Compared to the old days, today’s walls and ceilings are more complicated and can be very slow to dry.

Poorly crafted building codes are blamed for many examples of confusion, and the confusion over vapor retarders and vapor barriers is no exception. To design and build energy efficient and durable building assemblies, following the code is not enough. We need a new approach — such as the vapor profile.

What is a vapor profile?

“Moisture profile” might be a better term than “vapor profile,” because winning the moisture battle means keeping track of all phases or expressions of water. But vapor profile ties the term to “vapor retarder” and “vapor barrier,” terms that focus on that one layer and whether that layer restricts wetting by vapor diffusion. Vapor profile is about all layers and is as much about drying as it is about wetting.

Four steps to a vapor profile

Examining the vapor profile is a 4-step process:

1. Determine the vapor permeability of each component

This can be a lot more difficult than it sounds. Various building product manufacturers are not consistent in the ways they measure and report vapor permeability. Different standardized tests are used for different products. Also, the vapor permeability of many building materials is not constant — it can change as the material’s moisture content rises or falls.

Make sure that you get numbers for every material or component in your assembly, and obtain the actual test used and units reported. A good start is the Building Materials Property Table from BSC.

Class I Vapor Retarder (vapor barrier): less than or equal to 0.1 perms

Class II Vapor Retarder: less than or equal to 1 perm and greater than 0.1 perms

This classification is based on results from ASTM E-96 A (the dessicant or dry cup method). Any material greater than 10 perms is considered vapor permeable.

NOTE: The next two steps are not really sequential; you consider them together because they tell you about how to keep things from getting wet and also about letting them dry when they do get wet.

3. Assess the extent and direction of vapor drive

You need to consider the following:

a. Outdoor conditions, including temperature and relative humidity. It’s important to know how extreme and sustained the expected temperature differences are (with respect to the building interior). For more information, see Climate Consultant 4.

The question you are trying to answer is: Do I need a vapor retarder somewhere in the assembly to restrict the movement of vapor INTO the assembly?

4. Assess the moisture storage capacity and drying potential of the assembly

The next question you are trying to answer is: Do I have at least one way for vapor to GET OUT of the assembly?

An assembly with two vapor retarders or barriers on opposite sides of the assembly means that there is little to no drying potential in either direction. That can be a real problem brewing unless you design and detail for extraordinary moisture management protecting this assembly from wetting.

In this example, we have taken a representative GBA wall construction detail and assigned actual materials for each component of the assembly. 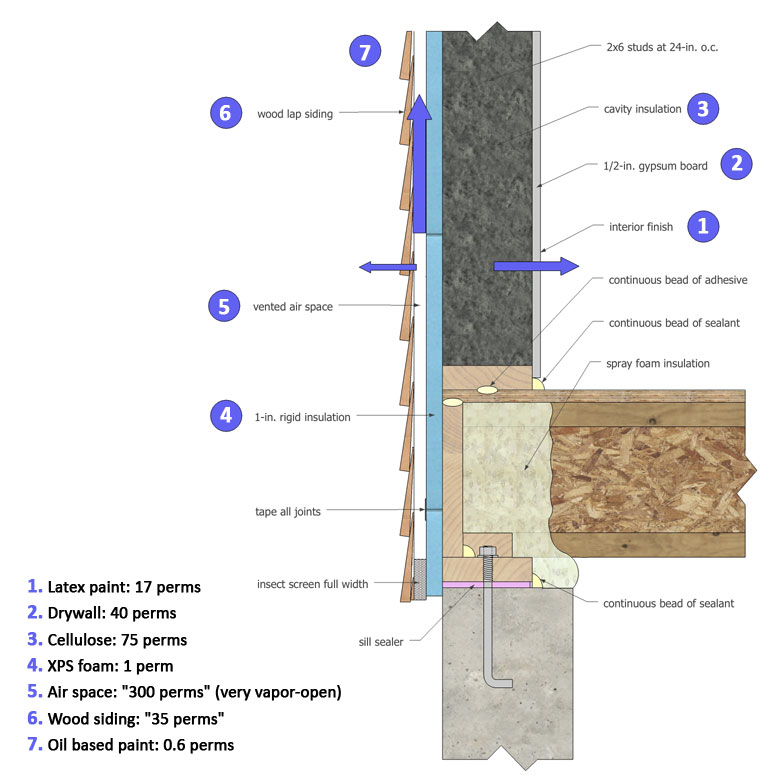 This wall can dry in OR out.

How do you determine the vapor permeability of your building materials?

In this example, all of the numbers came from the BSC table mentioned earlier.

Note that two numbers are in quotes. In the case of the air space it means that vapor moves so freely in air that it is as vapor permeable as it gets.

NOTE: If you can’t find the numbers you need in this table, you will have to search the Web or contact the manufacturer and tell them you need this information or you can’t use their product. That should get their attention.

After you have all the numbers, it is pretty easy to pick the one, or maybe two, most restrictive layers in the wall assembly, in terms of vapor permeability.

Note that 1 inch of XPS insulation at 1 perm is NOT vapor impermeable. However, it is the most restrictive, which means that MOST drying will take place to its interior or exterior. Also note that the near vapor impermeability of the oil-based paint is managed or overridden by the air space and the functional or equivalent vapor permeabilty of the wood siding as installed (with lots of little air gaps).

We don’t know what the interior and exterior temperature/relative humidity regimes for this assembly are; we have not picked a location or interior conditions — but…

…since there is such great drying potential on either side of the XPS, this assembly is well-suited to a wide range of climatic, site, and interior conditions.

In this second example, we have another representative GBA wall construction detail and again assigned actual materials for each component of the assembly. 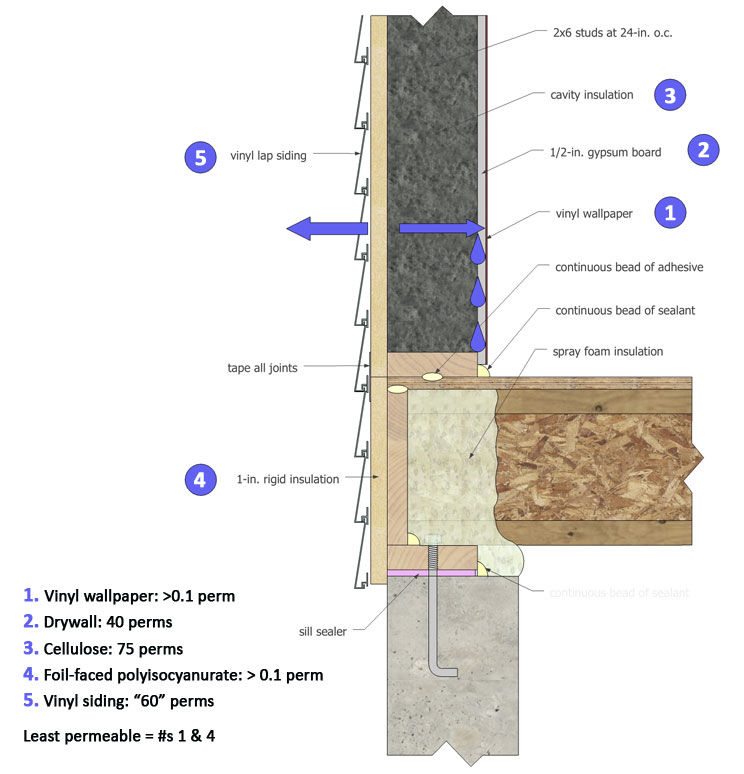 This wall can only dry to the outside. It is more risky.

We have two layers that are essentially vapor barriers, stopping all moisture from getting INTO and OUT OF the wall assembly. And the problem is that the two layers encase much of the building assembly.

Steps 3 and 4: Assess the vapor drive(s), storage, and drying capacity

Even without assessing the vapor drives, this assembly is likely to be a problem in ANY climate or interior conditions. If (or rather when) this assembly gets wet, it has very little drying potential. It would take nearly perfect design and construction details and very little moisture drive to keep this assembly from failing.

Let’s look more closely at Step 3 (keeping the assembly from getting wet) and Step 4 (letting it dry when it gets wet). If at all possible, we want to change one of the two restrictive layers to give the assembly more drying potential. But which one?

If this building is located in the hot-humid south, where the prevailing vapor drive is from the outside in, it is probably better to keep the foil-faced insulation and lose the vinyl wallpaper.

If this building is located in the far north, where the prevailing moisture drive comes during the winter from the inside, we might want to pick a rigid insulation product that is more vapor-permeable.

The examples look at two extremes; we didn’t really assess the vapor drive and moisture storage capacity of the various assemblies.

The vapor profile method is qualitative. It is quite possible that you want a more definitive analysis, because you really don’t know how the assembly will perform in your climate, at your site, with your interior conditions.

For a more exacting answer to this question, you have two options: consult with a building scientist who has enough practical experience to review your design and weigh in with an expert opinion; or turn to a more quantitative analytical tool.

The tool that many building scientists use is a software program called WUFI (a German acronym based on the Fraunhofer Institute for Building Physics, where the program was first developed). The software allows you to specify your assembly, pick your local climate and interior conditions, and then run a four-year analysis to see how the assembly handles moisture, wetting, and drying.

WUFI tends to be a conservative tool (it “fails” assemblies and conditions more often than real-world experience suggests), and so is often more useful in the hands of experienced building scientists than lay folks like builders and architects.

I am not sure where the term “vapor profile” came from. I learned to use the term during my time at Building Science Corporation when I was trying to document the way in which Dr. Joseph Lstiburek assesses buildings as part of a Building America project.