Can a Range Hood and an ERV Get Along?

Roger is building a two-story, 3500-square-foot house that will have an energy-recovery ventilator (ERV) and a kitchen range hood. His question is about how this ventilation system will affect the range hood, and vice versa.

An ERV supplies continuous fresh air throughout the house with its own ducts and it exhausts indoor air at the same rate, for balanced ventilation. Range hoods provide relatively powerful spot ventilation when needed, but do not replace that air; they are an exhaust-only appliance. The topic for this Q&A Spotlight is whether those two systems can work together to maintain not only fresh air, but also to balance pressurization of the house.

All About Makeup Air

Misconceptions About HRVs and ERVs

Nicolas Bertrand wonders whether the ERV could be installed in such a way that it provided makeup air for the range hood. “Do they have a function where they could run as an inlet only for the house and have the exhausts blocked?” he asks. “This way the hood could do the exhaust work and the ERV supply some of the required air. I know a dedicated return-air supply is normally required for a tight house, and sometimes with an inline heater if it is cold outside, but maybe there is a way to rig the ERV to take its place.”

Probably not, replies Malcolm Taylor. He knows of no ERV that can run in an unbalanced mode to provide makeup air.  “For range hoods over 400 cfm,” Taylor says, “you need dedicated makeup air, either mechanical or passive.”

The simplest solution in Roger’s situation may be to pick a range hood that’s small enough so makeup air isn’t an issue.

Roger’s research suggests that the range hood’s capacity should be linked to the Btu output of the stove in a ratio of 100 cfm per 10,000 Btu of heat. His plans call for a six-burner stove with a total output of 90,000 Btu.

He could stay with a 400 cfm range hood and limit the burners used at the same time to no more than 40,000 Btu. Or he could up the capacity of the range hood to 600 or more cfm to allow multiple burners to run at the same time. That would mean introducing makeup air.

“The concern, reason to pause, is if option B is chosen, does a makeup air system need to be done differently because a home has an ERV present?” he asks. “Also, if multiple burners are on at a medium temp, could one get away with a 400 cfm vent hood and eliminate the headache and cost of incorporation a makeup system into the home.”

Better not to limit the use of the stove, Taylor suggests. Just get the range hood you need to provide good ventilation, and if that means you need makeup air then install a dedicated vent in the kitchen or just crack a window. The 400 cfm cutoff, by the way, is a code provision, not whimsy, Taylor adds.

“The assumption with bathroom exhausts, dryers, and range hoods under a certain cfm is that they don’t unduly depressurize a house,” he adds. “Tight houses will have a certain amount of of air leakage and pressure differences caused [by] wind and the stack effect. Unless you get to Passive House levels of air tightness, these appliances shouldn’t cause problems.”

ERVs supply balanced ventilation, Taylor says, so no matter how they are operated they still aren’t designed to supply makeup air.

One homeowner’s solution to the problem

Bertrand is facing a similar situation. He’s also building a new house, and his wife, a “serious cook,” is insisting on a range hood. “End of story,” he says. “I can’t argue with her because I don’t like smoke or grease fumes in the house and she cooks like no other!”

Bertrand has settled on a variable-speed range hood with a maximum capacity of between 600 and 800 cfm. He envisions a makeup air system with dampers and possibly an inline heater for colder months.

“It’s not great for a super airtight house that is trying to conserve energy,” he adds, “but it’s not like she cooks 8 hours a day or anything. At most it would get used a couple hours a week I’m guessing.”

His biggest qualm is that the dampers in makeup air systems seem a “little flimsy.” He’d rather have a product with a more robust damper that seals tight and is well insulated.

Combustion appliances can be a problem

Depressurizing a house is a problem when combustion appliances are used (back-drafting can bring carbon monoxide into the house), Akos says. But a house of 3500 square feet would have to be very well sealed in order to have pressure issues with a 600 cfm range hood.

In a house with air leakage of 3ACH50 (standard construction), Akos writes, a clothes dryer, a 600 cfm range hood and three bathroom fans of 50 cfm each would not be enough to significantly unbalance the ERV.

“I think overall, for a large electric-only house, this doesn’t feel like a big issue,” he adds. “Range hood[s] don’t run for that long, plus you can always crack a window if you need to run all these exhaust fans together at the same time. I guess you can put in a [makeup air system] but I wouldn’t do much more than a well sealed barometric damper.”

Houses with open-combustion appliances are, of course, a different story. In that case, even a pressure difference of 5 pascal could be a problem.

One thing that will happen in a tight house, says T Carlson, is that fans won’t work at full capacity.

“Unless you provide makeup air your actual fan exhaust output will be much less, so you either up size the fan and it starves down to what you need or give it makeup air,” he says.

He has a 350 cfm hood over a gas cooktop, which puts some “serious depressurization” on the house even with a 6-inch, gravity dampened makeup air intake in the basement.

“In my opinion you should oversize fans and let them work harder to get you what you need,” he says. “Provide makeup air to the house from the laundry room to give the dryer a little extra to work with. You shouldn’t have problems. That’s what my house has been doing for just over 3 years.”

There is quite a bit of active research and resources on the issue of ventilation in tight houses, makeup air for exhaust fans—particularly kitchen range hoods—and the efficacy of range hoods.

Most of the resources I include below came my way through Laura Capps at Efficiency Vermont. An excellent researcher and engineer, Laura did a presentation for our local building professionals group on the relatively new Efficiency Vermont Healthy Homes program.

An illustration from his work shown below deals with house pressures, exhaust rates, and airtightness. From the report: “Even modest levels of exhaust can create risks in tight houses that contain combustion appliances. Similarly, very high exhaust rates may create risks even in relatively leaky houses.” 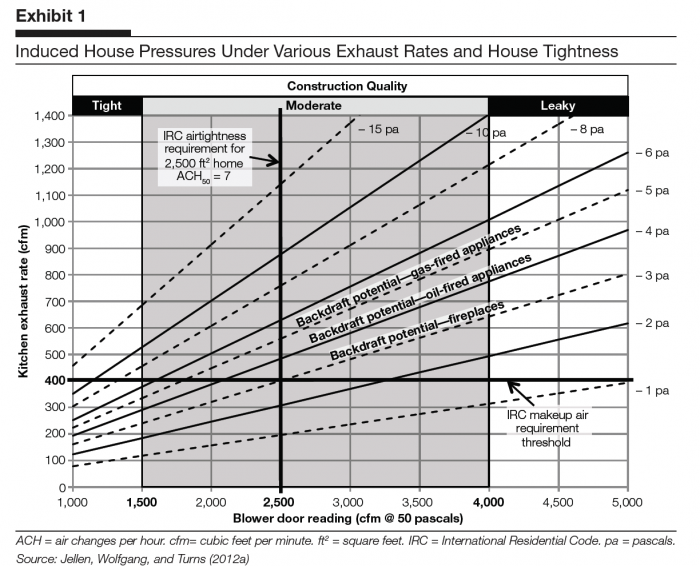 But what’s really striking in this report is Turns’ discussion of the two main types of makeup air systems—engineered openings and HVAC-integrated. Turns wrote:

“Although appealing in their simplicity, engineered openings are effective only at relatively low pressures, and thus relatively low kitchen exhaust rates. With exhaust rates of about 150 cfm or greater and a 10-square-inch opening, the pressure required to let in a roughly equivalent amount of air is already greater than the pressure that could backdraft a masonry fireplace. In addition, there is no opportunity to heat or cool the incoming air, which can lead to occupant discomfort.” 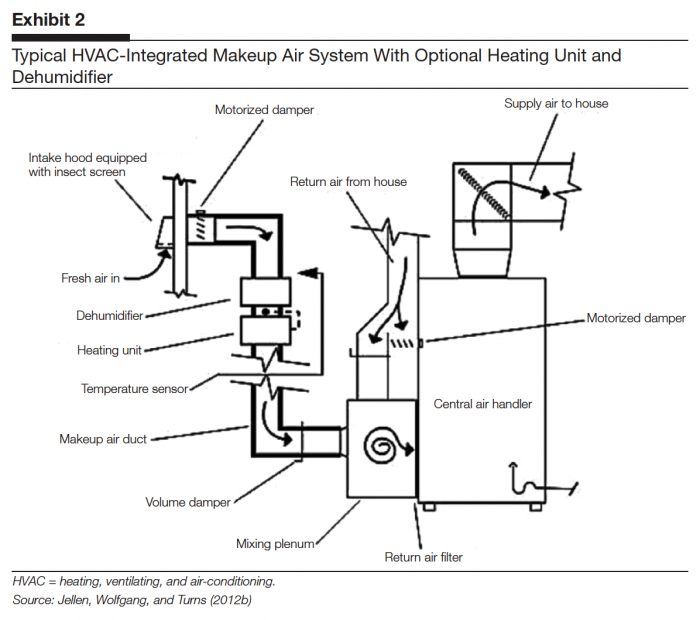 Other sources of information include:

This is a really tough issue. I am working with a client in a relatively new home—around 1ACH50 airtightness, a wood stove with dedicated combustion air, a four-burner propane cooktop, a 400 cfm kitchen range hood, and a Minotair Pentacare for balanced mechanical ventilation. When the range hood is on, I measured -19 pascal pressure in the home. We can’t use HVAC-integrated makeup air because there is no central forced-air system, and Turns’ article suggests that it just is not possible to do an interlock makeup air duct system. We are at the point of requiring the client to eliminate their propane cooktop, their woodstove, or both (and not to mention difficulties they are having with their clothes dryer).

Maybe we will end up with residential versions of this commercial mechanical ventilation system: enVerid HVAC Load Reduction (HLR) borrowed from systems developed for submarines!