One of the great ironies in construction (I bet you didn’t even know that construction could be ironic) is that Cape Cod style houses perform pretty poorly on Cape Cod. The year-round sea breezes wash right through a Cape building frame, making them chilly and uncomfortable in the winter months.

How did Cape Cod style houses (which perform not-so-great in the winter) become popular in New England? Maybe the name was a marketing scheme? And how can we address the air leakage and heat loss issues to make Capes more comfortable?

Many rooms in a small footprint

The second floor framing in Cape Cod style houses packs a lot of living into a compact space. In as little as a 600-square-foot footprint, one can fit a 4-bedroom, 2-bath, 1100-square-foot home. For the price and availability, Capes can be quite a deal.

How to Insulate and Air-Seal Pull-Down Attic Stairs

How to Insulate and Air Seal an Attic Hatch

Can Switching to a Dual-Flush Toilet Save Heat?

The Journal of Poor Homebuilding

However, that same framing, which makes great use of space, also leaks conditioned air like crazy. If some half-assed attempt to ventilate has been made, odds are very good the second floor will be frigid come January.

Heat distribution is the first area of concern. Most heating system and insulation issues with Capes stem from their having been built in the cheap-oil era. In 1950, insulation was an afterthought and heating was dirt cheap. It’s the rare Cape which has had these shortcomings fully addressed since its construction.

Sometimes the second floor isn’t piped for heat at all. On other occasions, the hot water pipes are run through the walls. When the baseboard units are on the opposite side of the house, hot water pipes are often run through the kneewall space outside the attic insulation. All of these are exciting ways to lose heat (or, in the case of the unheated second floor, not gain enough).

Each problem has its own solution. If the second floor isn’t heated, it might make sense to have heating baseboard or ducting installed. No amount of fans or wishful thinking will move enough heat from the first floor of a Cape to make it comfortable.

If the hot water pipes for the second floor baseboards run through the exterior walls, well, you have a more challenging problem. If the exterior walls are uninsulated, dense-pack them with cellulose; this will also insulate the pipes.

If the walls are insulated, try to determine whether the pipes run inside the insulation. (I know… that’s not easy. I use a fiber-optic boroscope and infrared camera to look inside the wall cavity). If not, you’ll need to reinsulate that cavity and put some thermal resistance between the pipe and outside sheathing. 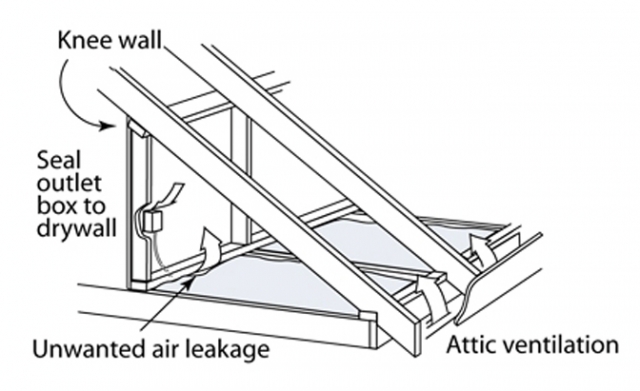 The illustration shows an attic kneewall in a Cape Cod style house. Capes are often insulated at the vertical wall and joist flats in the kneewalls. If the hot water pipes for the second floor heating are run through the kneewalls, they’ll be outside the thermal envelope.

Where will you locate your air barrier?

Insulation and air sealing can be problematic in a Cape. The kneewall framing usually has built-in bookshelves, drawers and closets. The kneewall sits on top of the first floor joists, meaning that interior air is usually flowing under the kneewall. Finally, the tops of the kneewalls usually aren’t sealed. Much more conditioned air than you’d like flows up the wall slopes and out the attic cap.

There are three possible approaches to insulating and air sealing a Cape.

One can adopt an unvented approach and seal the whole thing. (If you choose this approach, you’d better have moisture under control).

You can insulate the roof deck and vent the attic. This vented approach is challenging in a Cape, as the ventilation needs a clear path from soffit to peak. The eaves need to be sealed to prevent unwanted unconditioned air from wind washing the insulation (I’m looking at you, ocean winds), and the tops of the kneewalls need to be sealed around the vents.

Finally, they can be insulated at the horizontal and vertical flats. In this case, the tops and bottoms of the kneewalls need to be air sealed with blocking.

Cape Cod style homes date back a couple of hundred years. They’ve been optimized for space, but were not developed with energy efficiency in mind. But as long as you seal the air leaks and insulate well, a Cape can be warm and efficient.

Erik North, the owner of Free Energy Maine, is an energy auditor and home performance specialist in Westbrook, Maine. He is also the author of the Energy Auditing Blog.