In the first installment of a four-part blog series, Hammer & Hand details the exterior walls of Karuna House

The exhibit itself included a set of four beautiful full-scale cross sections, built by Hammer & Hand’s Jason Woods, of the high-performance wall assemblies that these four projects used to achieve Passive House performance.

Each of these wall cross sections is accompanied by a series of illustrations created for us by Ryan Sullivan of Paste in Place. The illustrations explain how each wall manages heat, air, and moisture. In a series of four posts, we’ll share these illustrations and the analysis embedded within in them. 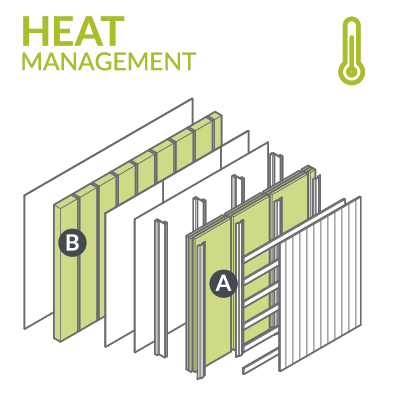 At Karuna House, the client and designers determined the form of the building first and the strategy to bring that design to high performance levels was overlayed second. So the wall assembly had to be especially thermally resistant to allow for the form’s articulations and increased surface area. The key challenge was to do this while not making the wall extremely thick.

The assembly’s high R-57 insulative value is provided by (A) three 2-inch layers of foil-faced polyisocyanurate insulation (R-36) with seams offset by the Z-girts that hold the layers in place and (B) 5 1/2 inches of high-density cellulose (R-21). 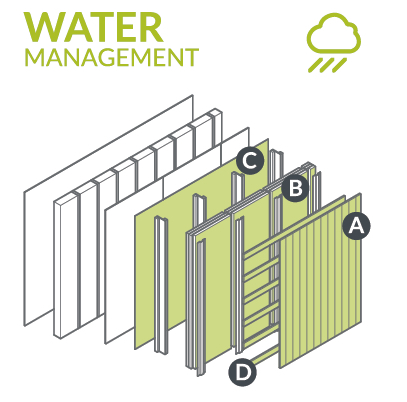 The first line of defense for bulk water management is Karuna House’s siding (A) and the ventilated rainscreen cavity (D) behind that siding that allows water to drain harmlessly away. The second barrier is the foil face of the polyiso insulation (B). And if any water were to penetrate beyond that, the final barrier is the fluid applied, vapor-open air barrier (C). 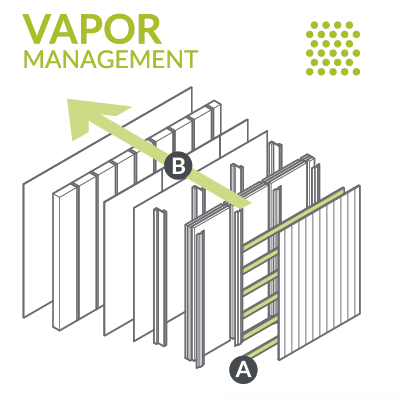 Starting just inboard of the innermost layer of foil faced polyiso (the foil is a vapor barrier), the assembly is vapor-open to the inside (B) but not the outside. This strategy works because the polyiso keeps the structural sheathing warm and protected, as shown in the THERM diagram (see Image #2 at the bottom of the page). Any water that finds it way between the polyiso and the fluid-applied air barrier gets warm, becomes vapor, and then is transferred harmlessly inside through the vapor-open side of the assembly.

The air barrier for the Karuna House wall assembly is a fluid-applied, vapor-open membrane manufactured by Prosoco.

To read the next installment of this series, click this link: High-Performance Walls, Part 2.

Zack Semke is the director of business development at Hammer & Hand a company specializing in high-performance building with offices in Washington and Oregon.