This is the second of four posts delving into the anatomy of high-performance wall assemblies. The last post featured the walls at Karuna House. This week’s explains our approach at Pumpkin Ridge Passive House. All four analyses are part of our building science exhibit, “Evolution of Enclosure,” that recently completed a five-week showing at AIA Portland’s Center for Architecture. 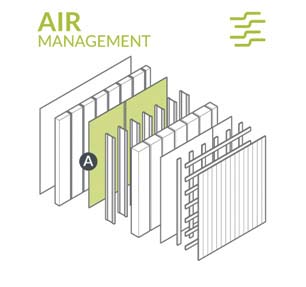 The air barrier for Pumpkin Ridge Passive House is a layer of OSB with fluid applied at seams. While the OSB is vapor-permeable (and gets more so when wet), it does retard vapor transfer. 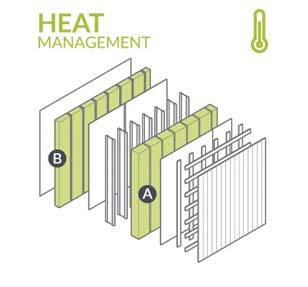 The wall’s R-60 insulative value (center of cavity, including the impact of sheet goods and air films) is provided by two thick layers of high-density cellulose insulation: 9 1/2 inches of insulation in a Larsen truss system to the exterior and 5 1/2 inches in the interior 2×6 stud wall. 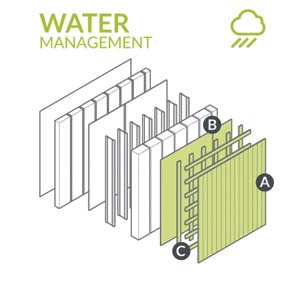 The first line of defense for bulk water management is Pumpkin Ridge Passive House’s vertical cedar siding and the ventilated rainscreen cavity that facilitates drainage. The second (and final) barrier) is the layer of tongue-and-groove Agepan (wax-impregnated wood fiber) panels that are so tightly fitted that wind cannot blow bulk water through. 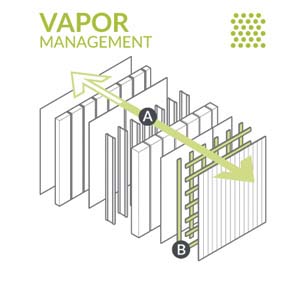 As mentioned earlier, the taped OSB is vapor-permeable but it does retard vapor transfer. This throttles down the flow vapor from the home’s interior into the assembly. The rest of the assembly, from cellulose insulation to the Agepan layer, is very vapor-open, so the airflow created across the assembly’s face by the ventilated rainscreen cavity promotes the drying of both the assembly and the cladding.

Zack Semke is the director of business development at Hammer & Hand, a company specializing in high-performance building. The Glasswood Commercial Passive House Retrofit wall assembly will be detailed in Semke’s next post.