A brief update on an exhaustive project

I promised to follow up on Hudson Valley Preservation’s (HVP) deep-energy retrofit of this 1780 timber-framed house in Washington Depot, CT. This is the second post in a series. For background on the project, read “Deep-Energy Retrofit of an Old Timber Frame” and/or listen to this episode of the The BS* + Beer Show. Since then, the crew has been busy on the installation of the windows, siding, and HVAC system. They have also completed a few notable interior details.

When I spoke to HVP founder Mason Lord last week, the first thing he mentioned was that, despite CT’s winter temperatures, they haven’t turned on the heating system in order to avoid getting dust in the newly installed ducts. The crew has been plenty comfortable with just three radiator-style space heaters—even with the six fireplaces and multiple penetrations in the enclosure that have yet to be sealed. It’s an indication of the envelope’s tightness, and something that rightly pleases Mason. 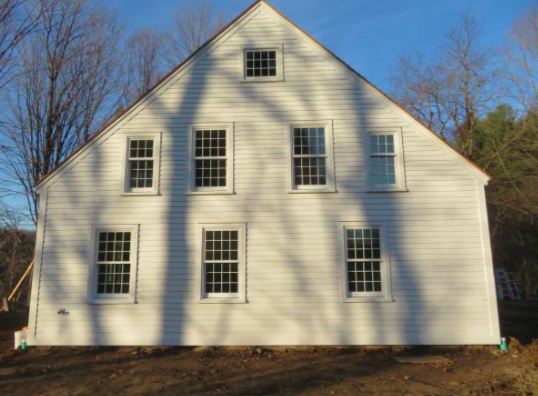 That’s a lot of windows

Since the last recap, the crew’s biggest undertaking was replacing the single-pane double-hung Brosco windows—the majority of which were installed during a 1972 renovation—and detailing the new flangeless Loewen triple-glazed double-hung windows with aluminum-clad sash. 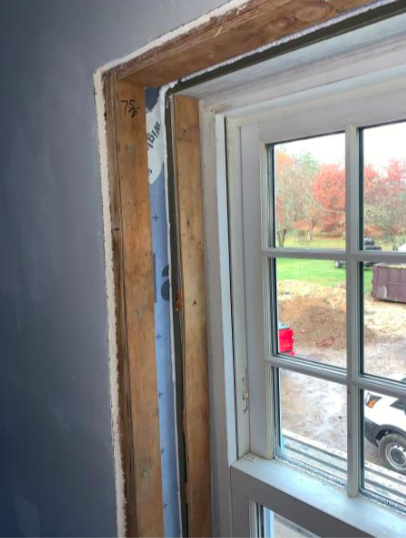 The challenge lay with the fact that the entire house was out of plumb by 4 in. from north to south. Where it was critical, they plumbed the interior walls but where it wasn’t necessary, they didn’t. That meant the window extension jambs varied in depth from 2 in. to 3 in. In other words, a jamb could measure 8 in. on the bottom and 10 in. on top on one elevation and vice-versa on the opposite. “There was a lot of calculating and scribing to come up with quick and efficient…