Our construction company, Hammer & Hand, has built several wood-framed Passive House buildings in the Pacific Northwest. Over the years, our approach to building high-R walls has evolved.

Drawing on six projects from the pool of high-performance buildings constructed by Hammer & Hand, I will examine how each of five wall assemblies approached the issues of performance, cost, land use, and durability. These case studies will also chart Hammer & Hand’s move toward developing details that are more familiar to the building community and easier to assemble, as high-R walls transition from unusual oddities to common practice.

The five projects are:

All About Larsen Trusses

Courtland Place – a carpenter’s puzzle with a minimal budget

This personal project of Hammer & Hand’s Dan Whitmore focused on achieving the Passivhaus standard with a small budget, using readily available materials and the strengths of the building team to realize complex carpentry details.

The Courtland Place wall assembly is illustrated in Image #2, below.

Wall structure. This house sits atop an insulated slab on grade, with the wall cantilevered out to meet the exterior edge of the perimeter EPS and minimize thermal bridging at the foundation wall intersection. Dan used a wall truss whose interior chord bears the structural load and shear of the building. Like a Larsen truss, the exterior chord carries the faÃ§ade of the building and establishes the insulation cavity.

Air barrier. The shear panels (OSB) at the inside face of the wall truss form the air barrier, with panel junctions sealed with tape and sealants. (Note: placing the air barrier in this exposed location left it prone to damage from occupants. Though it saved on construction cost, Dan does not recommend the strategy to others.)

Moisture management. Bulk water is addressed at the cladding with a true ventilated rainscreen and a water-resistive barrier (WRB) over Homasote, a highly permeable exterior sheathing. The wall is vapor-open to the exterior. (Of course, diffusion can go in either direction.)

Adaptability. This wall assembly is easily adapted to meet the specific performance requirements of any given project. Altering the dimension of the gusset spanning one chord to the next changes the depth of insulation.

Cost. As this project enjoyed very low costs for skilled labor (mostly Dan’s sweat equity, as this was his personal project), it was biased toward labor-intensive solutions over moderate- to high-cost materials in order to meet its budgetary targets. For our typical client, this would not have been an appropriate balance.

Glasswood – A Passive House retrofit of a commercial building

This retrofit of a 100-year-old commercial structure was an unusual project for us. Our goals were to reuse and reinforce the existing structure and achieve Passivhaus certification on a tight lot (and therefore with minimal added material outboard of the original wall face).

The Glasswood wall assembly is illustrated in Image #3, below.

Wall structure. We added shear panels to the exterior and a secondary interior framed wall for additional insulation. To meet fire code requirements, we installed DensGlass exterior gypsum sheathing over the layer of rigid exterior insulation.

Air barrier. The secondary sheathing layer on the interior face of the existing wall, taped at all panel edges, serves as the air barrier. It connects to the same material across the floor and across the ceiling to form a continuous center-of-the-wall air barrier. This air barrier layer is sandwiched between two 2×4 walls, both insulated with high-density cellulose. The interior 2×4 layer acts as a service cavity. The outboard 2×4 layer is the original wall and serves as the structure.

Moisture management. Exterior Hardie siding handles bulk water with a 3/4-inch ventilated rainscreen cavity. Per Building Science Corporation recommendations, we used Douglas fir furring strips in lieu of pressure-treated lumber in order to minimize environmental impact and construction costs. The WRB is a combination of the Prosoco R-Guard system at punched openings, integrated into a VaporShield membrane installed over the DensGlass. This wall will mostly dry to the interior, though it is open to the exterior through the thinner layer of EPS and ventilated rainscreen cavity. Interior moisture conditions are monitored through the ventilation system to ensure that vapor is not driven into the assembly from interior spaces.

Insulation. 2 inches of EPS exterior insulation, with 7 inches of dense-packed cellulose in the two wall cavities. This was a compromise. We originally planned for 2 inches of high-density mineral wool; however, the municipality was not comfortable with the information on this product’s fire rating.

Cost. Because this was part of a full building retrofit that involved bringing a historic building up to commercial code, the added expense of reaching the Passivhaus standard was nominal.

Land use. Due to the tight site, the 2 inches of EPS on the exterior of the existing wall and 7 inches of cellulose inside the wall made Passive House performance possible without increasing the building footprint appreciably.

Our main project priority was to make this beautiful and complex design perform as a passive house.

The Karuna House wall assembly is illustrated in Image #4 at the bottom of the page. 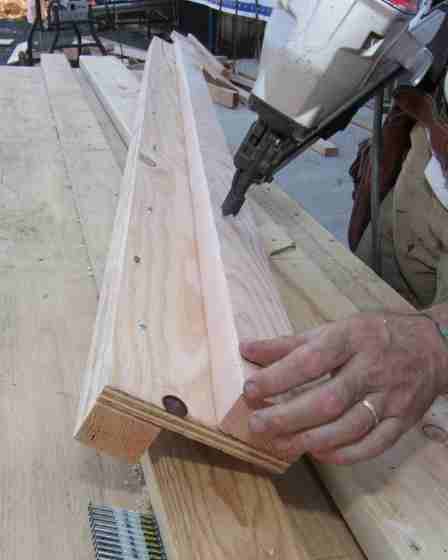 Wall structure. A standard 2Ã—6 stick-framed wall is integrated into a larger steel structural skeleton. Due to the structural requirements of the exterior stucco cladding, the engineer required a Z-joist detail to transfer the load across the 6 inches of exterior polyisocyanurate insulation. This Z-joist assembly carries through to areas where the house is clad in cedar, as well. [Editor’s note: Sam Hagerman uses the term “Z-joist” to refer to a type of site-built stud (a variation on the Larsen truss) assembled from 5/8-inch plywood and strips of softwood lumber, as seen in the photo at left. To see how these Z-joists are used in the Karuna House wall assembly, consult Figure #4 at the bottom of the page.]

Air barrier. The exterior sheathing is coated with the Prosoco R-Guard system to create the home’s air barrier.

Moisture management. Bulk water is handled by a combination of cedar and stucco claddings with rainscreen cavities. The WRB is provided by the foil-faced exterior insulation, taped at all seams. The Prosoco system provides a secondary layer of bulk water protection of the structure. The wall dries to the interior.

Insulation. 6 inches of foil-faced polyisocyanurate wraps the building, and 5.5 inches of dense-packed cellulose forms the thermal layer inside the 2Ã—6 wall cavity.

Cost. This was not a budget-driven project, though the Passive House “intervention” had to be cost-effective. In the end, making the home perform as a Passive House cost less than 2% of the project budget.

Land use. The footprint of the house was not a concern. That said, the final wall thickness is just moderate.

Wall structure. For both projects, we used 2Ã—8 stud walls in order to establish a thicker wall cavity without the additional labor involved with a double-stud wall application.

Air barrier. Structural sheathing, sealed at panel edges, forms the air barrier. Due to field experience, we moved to Prosoco liquid-applied sealant in lieu of tape.

Moisture management. In both homes’ wall systems, we installed fiber-cement siding over a 3/4-inch ventilated rainscreen cavity. A membrane establishes the WRB over the rigid exterior insulation. At the exterior sheathing layer, a secondary WRB protects the structure. In the Puget house, we established this secondary WRB using Prosoco R-Guard. Due to lower exposure and budget constraints, we used Zip sheathing with its integrated WRB to establish the secondary WRB at the Maple Leaf house. The exterior rigid insulation (paper-faced polyisocyanurate) has a vapor-open covering, so vapor can move out to the ventilated rainscreen cavity or into the interior of the building.

Cost. The additional cost of exterior insulation, and the lengthy fasteners therefore needed for the siding assembly, was moderate. The time to build the assembly, and therefore the labor cost, closely tracks standard construction expectations.

Land use. With the higher performing R-value of the exterior polyiso, these assemblies have shaved a few valuable inches off the wall thickness and building footprint — an important “win” in their urban settings.

Pumpkin Ridge – “Let’s do all cellulose!”

For the wall at the Pumpkin Ridge Passive House we set out to do a low-embodied energy insulation package, partly to offset the global warming potential (GWP) of the EPS required in the foundation (necessary to handle sloped site conditions). We were also committed to keeping costs low enough that client utility bill savings could pay for any added mortgage service due to those high-performance building costs.

The Pumpkin Ridge wall assembly is illustrated in Image #7, below.

Air barrier. The air barrier was easily established at the sheathing layer with liquid-applied membrane at the seams.

Moisture management. Bulk water is managed with exterior cedar cladding over a 3/4-inch ventilated rainscreen cavity. The WRB is provided by the wax-impregnated Agepan sheathing. As a cellulose-based, diffusion-open wall, vapor can readily leave the assembly in either direction.

Insulation. With a total of 15 inches of blown-in cellulose in the 9.5-inch Larsen truss cavity and the 5.5-inch-thick interior stud bay, the building boasts a very robust, low-embodied-energy thermal envelope.

Cost. The ease of installing the I-joist and Agepan combination (and lower labor cost) mitigated the potential complexity of the Larsen truss application and the material costs of the I-joists and Agepan sheathing.

Land use. Land use was not an issue due to the large site, which allowed for a thick wall.

In reflecting on our approaches to these different wall assemblies, it is clear that the primary driver of design and construction decisions for Hammer & Hand continues to be client preference and site constraints. However, buildability — in terms of time, money, and resilience — will always be an important consideration, and may be the most important one for other builders.

If the client prefers a building with the lowest embodied energy possible, then stick-framed, exterior Larsen trusses with TJIs, Agepan sheathing, and blown-in cellulose insulation is a fantastic solution.

If, however, the project sits on a compact site and is bumping up against zoning restrictions, then the higher performing, and therefore thinner, exterior insulation options (like polyisocyanurate) become a better choice.

As the industry moves toward monolithic exterior rigid insulation in general, it’s a simple process to just thicken up that exterior layer a bit. Both Maple Leaf Passive House and Puget Passive House are good examples of this approach.

The buildability of each of these wall sections may differ from one practitioner to another. It is important to do a back-of-the-envelope parametric analysis of all the above factors, including climate considerations, to determine what the best wall assembly is for each project. The power of a performance-based building energy standard is that it allows the designer and builder freedom to optimize the assembly, taking into account all of these factors.

Sam Hagerman is president of Hammer & Hand, a construction company with offices in Seattle, Washington, and Portland, Oregon. He was also the inaugural president of the Passive House Alliance U.S., and continues to serve on the board.