At the recent ACI conference, Michael Blasnik showed big data on home performance collected from hundreds of thousands of homes

The Nest thermostat has been around since October 2011, quietly collecting data on how your home — and the homes of hundreds of thousands of your neighbors — operates. It gathers information about indoor temperature, relative humidity, air conditioner runtime, auxiliary heat operation for heat pumps, and much more. Unlike the Ecobee thermostat, however, Nest doesn’t let its owners see all those data (which is a problem only for energy geeks really). Enter Michael Blasnik.

Blasnik, a building science and data guru, consulted on the Nest while it was under development and after its release. He has since joined the Nest team and is now a Google employee, and he’s been having a lot of fun looking at the data and trying to understand what they’re saying.

At the ACI conference in New Orleans last week, he gave attendees a first look at some of those data, and my, what a treasure trove he’s got his hands on! The room was packed, as you can see in the photo above. I took that photo a few minutes before the session began. After it started, a lot of people were standing in the back as well, and I’m sure many decided to go to a different session because they couldn’t get in.

So let’s get into the data. Blasnik showed 60 graphs of data, and I didn’t take pictures of all of them. Below are the ones that seemed most interesting to me. (It’s really hard to try to take notes, take pictures, and think about what you’re seeing all at the same time.) 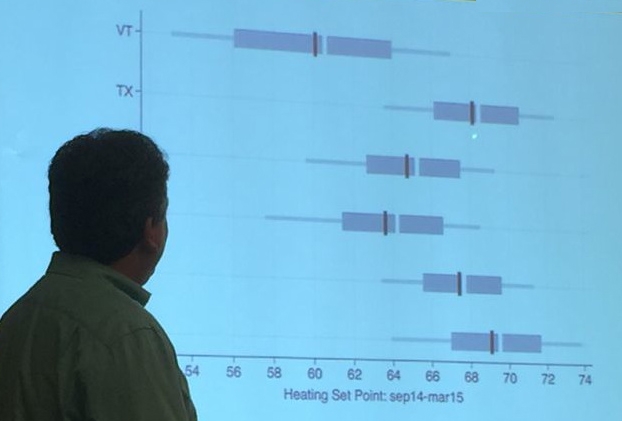 The chart at left shows thermostat setpoints during heating season in a few select states. Vermont won for lowest setting at about 60°F. I don’t have a photo, but he also showed heating systems in use by time of year and outdoor temperature. I think Vermont won that one, too, in terms of lowest outdoor temperature before turning on heating systems, but I didn’t get a photo. I do recall there was a small bump of people turning on heating systems when the temperature in Vermont dropped to the 50s (?), and Mike Rogers of Omstout Consulting, a Vermonter, said, “Those are the New Yorkers.” 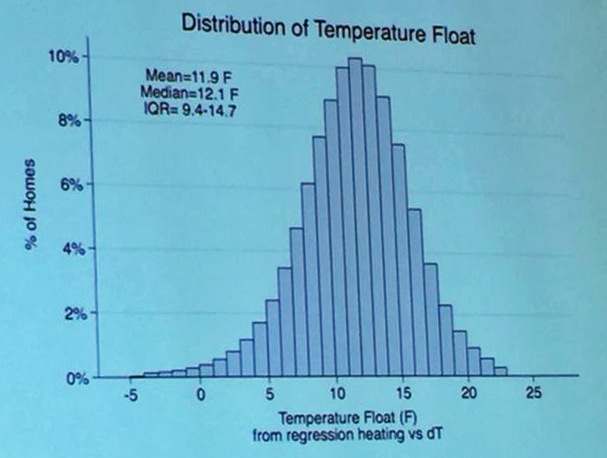 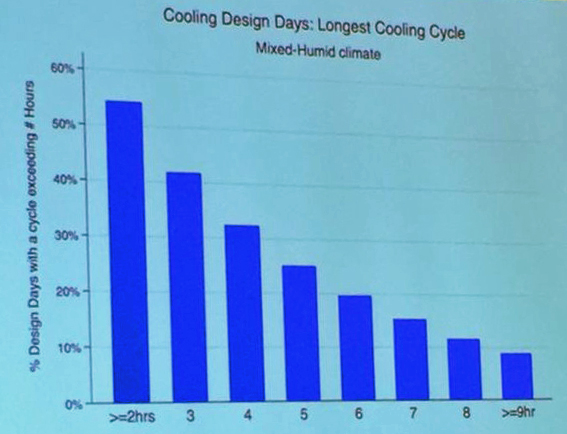 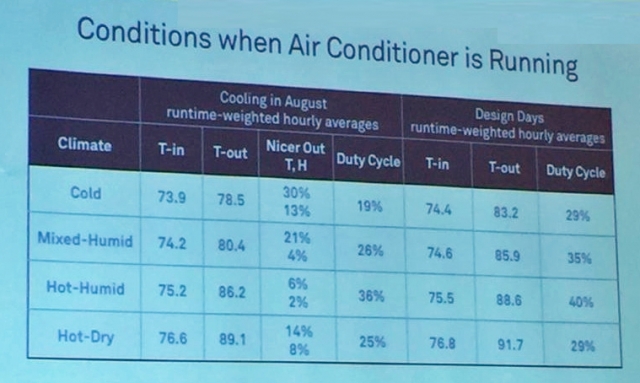 Notice that in cold climates this happens 30% of the time. Not too surprising since they’re probably the same people who say Atlanta is hot and muggy when they move to the South. (No, Houston, New Orleans, and Tampa are hot and muggy. Atlanta has a really nice climate!) What did surprise me is that it’s 21% in mixed-humid climates. Yes, right here in Atlanta, the average Nest thermostat owner runs their AC one out of each five hours when it’s nice outdoors than indoors. Hmmm.

If that seems a little odd and wasteful, consider the second number in that column. It shows the enthalpy difference between indoors and outdoors, which captures the effect of humidity, too. Notice that an AC in a mixed-humid climate runs only 4% of the time when it’s nicer outside than inside based on temperature and humidity, so it’s not as bad as it looks based on temperature only. 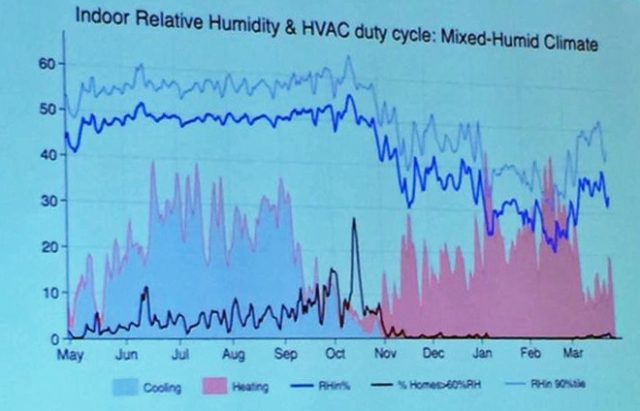 The graph at left is a bit confusing, but if you spend some time with it, you’ll reap the benefits. It shows when heating and cooling are happening throughout the year, how the indoor relative humidity changes, the relative humidity in the 90th percentile of homes, and what percentage of homes have humidity above 60%.

Notice that spike in homes with humidity above 60% that occurs in October? It seems to support something I wrote a few years ago: Why Is Fall a Good Time of Year for Window Condensation?

The next three graphs show indoor relative humidity as a function of air conditioner runtime. The results may challenge your beliefs and call into question what we’ve been teaching for a long time now, so you may want to sit down before taking a look. 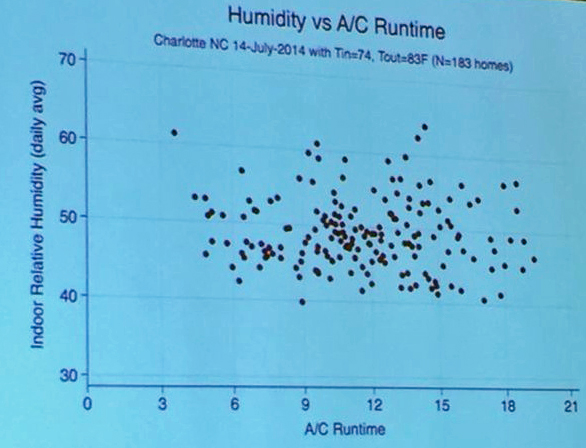 Ready? Here’s the first one (the graph at left). These are all for homes in Charlotte, North Carolina, a mixed-humid climate.

See the trend? Neither do I. There’s no pattern there, just a scattering of data points all over the graph. But this was just for a single day, 14 July 2014, so we probably just need to look at more days, right? How about these? 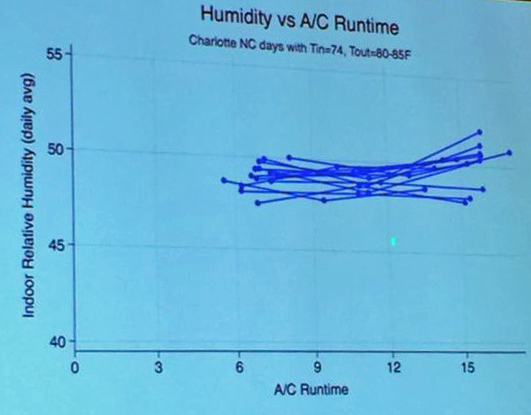 Hmmm. Most of us in the world of building science have been preaching the gospel of AC runtime as a the cure for high indoor relative humidity. The data above, for warm days in a mixed-humid climate, provide no evidence that what we’re saying is correct.

In fact, if there’s a trend in those data above at all, it’s the opposite: Higher AC runtime results in higher indoor relative humidity (see graph at left). It’s not a strong trend in that direction, but still, even if it’s flat, it’s not what we expect to see. 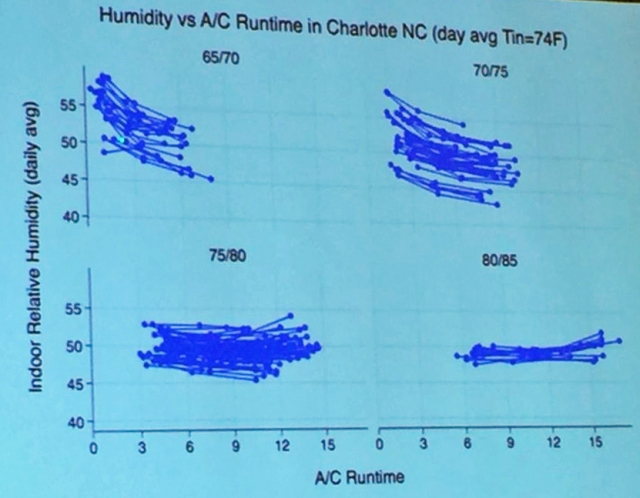 The slide at left shows data for four different temperature ranges, and it’s not until you get to the mild days with temperatures between 65°F and 75°F that we see the trend we expect. What the heck is going on here?!

Of course, runtime and indoor relative humidity are only two variables that factor into the question of air conditioner performance. One thing that HVAC systems with air distribution can do is change the pressures inside the house. Unbalanced duct leakage can bring more outdoor air into the house, and that could be what’s happening here. We know the typical home has leaky ducts. We also don’t know anything about how tight the building enclosure of these homes is. What we’re seeing above is an average of what’s going on in a whole lot of homes, so we really can’t draw any conclusions yet.

Blasnik showed similar data sets for other cities: Houston and Dallas (about 1000 homes each), Minneapolis, Washington, DC, and more. The Houston and Dallas data showed the same patterns as Charlotte. Minneapolis did show a decreasing trend on the hot days, which Gary Nelson, founder of The Energy Conservatory, said was probably because the ducts are inside the building enclosure there.

The takeaways from these data for Blasnik were that air conditioners are doing a pretty good job with latent control and there’s no real evidence of oversizing based on the runtime data he’s looked at. Also, very few homes went above 60% relative humidity, and even in the places where the curve is flat, the relative humidity is around 50%, which is right where you want to be.

I’ll close with a couple of Blasnik’s slides on electric resistance auxiliary heat (strip heat) use in heat pumps. 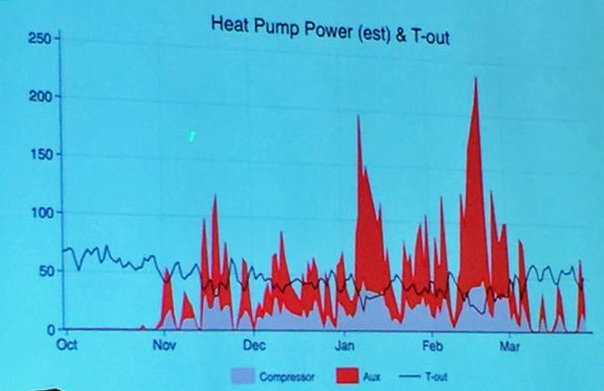 The first one (at left) shows huge opportunities for saving money and energy for homeowners. It’s the top 10% of strip heat users, and according to Blasnik, they were burning an incredible 240 kilowatt-hours per day on the coldest days. Wow! (I’ve written about how common it is for heat pumps to run strip heat when they shouldn’t.) 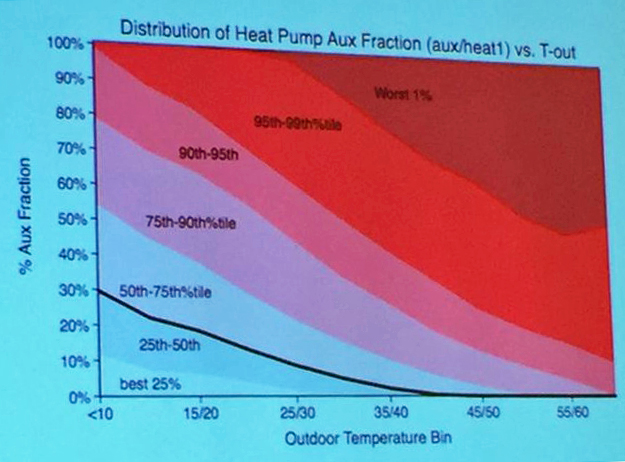 The graph at left shows strip heat use for all heat pump owners. You can see that in the median homes (represented by the black line), the heat pump’s supplemental heat kicks on at about 40°F. The worst homes are using strip heat at outdoor temperatures above 60°F. (I wonder how low the heating degree day base temperature might be if the worst homes were excluded.)

The best 25% of homes are getting only about 10% of their heat from the strips even when the temperature is down at 10°F. Blasnik also threw out some numbers about the low temperatures they’ve seen where some homes are still getting 100% from the heat pump, but I didn’t write them down. D’oh!

The Strange Geography of Thermostat Settings

Get Ready for Smart Appliances

(I’m afraid Edward Tufte would not approve of this graph, but to be fair, Blasnik admitted that he struggled with finding a good way to present these important data and the rest of his graphs are great. The shaded regions give the false impression that their areas represent the number of homes subject to those conditions. That is an incorrect impression, however, as the number of homes contributing to the data below the black line is equal to the number included above the black line. For more on this topic, buy yourself a copy of Tufte’s excellent book, The Visual Display of Quantitative Information.)

The data that Blasnik showed us at the ACI conference were astounding. When I was talking to him afterward, he said they have enough data for a dozen or more grad students to write doctoral dissertations on. Let’s hope Nest will release them. Even better, give us a searchable database!

But let’s also give props to Nest for collecting the data and letting Michael share some of them with us at ACI. Whether you have a Nest thermostat or not, these data can help everyone by adding to our understanding of how homes really work.