For the past two years, Ted Lemon and Andrea Lemon have been living in a single-family Passivhaus which they built in Brattleboro, Vermont. Ted Lemon wrote the essay below in July 2012.

Andrea and I recently started sleeping in the house, so some things that I’ve been noticing about the heating profile of the house are starting to become clear.

When we finally got the HRV running a few weeks ago, I was disappointed to notice that we don’t have the kind of evenness of temperature between the upper and lower stories of the house that we were hoping for. My first panicked theory about this was that the HRV wasn’t working. Panicked, because the ducts are all nice and snug behind walls now, so if we got it wrong, it’s going to be a real pain to fix.

The good news is that I don’t think the problem is the HRV, although I’m contemplating one tweak to the vent layout which we could do without any wall surgery.

When we talked with Peter Schneider (one of the two energy consultants on our project) about the possibility of overheating, he reported his experience with some of the houses that Efficiency Vermont has designed up in Charlotte, Vermont. These all have lots of south-facing windows, and Peter hasn’t seen problems with overheating in the summer. Based on Peter’s reports, we were kind of hoping to get away without doing one of the features we’ve got on the plan: active shading on the south-facing windows.

If you look at the drawing of the house shown below, which is a view of the south face, you’ll see that the lower windows have what looks like louvers on them. 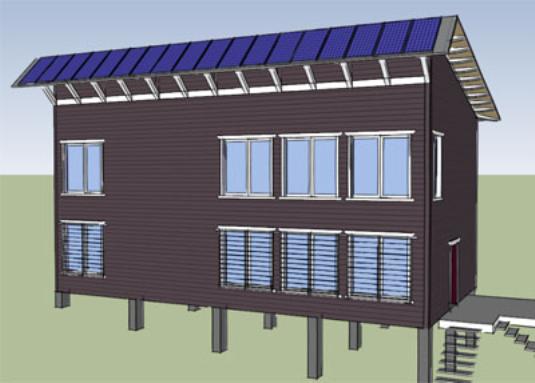 These are part of the solar shading plan. The idea is to install the louvers in spring and keep them around until fall, and then take them off and stash them for the winter. These louvers will prevent high-angle light from making it through the window in the summer and heating the interior space. By installing them on the outside, we minimize heat gain inside — hopefully most of the heat that is generated when sunlight is absorbed by these shades will re-radiate into the outside air, rather than heating the inside of the house.

We’re experiencing some overheating. Why is Peter seeing different results? I don’t know, but I have a theory. I think the windows in the houses in Charlotte may not have the same solar heat gain coefficient as ours, and may reflect more high-incidence light, while letting low-incidence light in, so that they gain more heat in the winter than they do in the summer, even if the same amount of light is hitting them.

The way our house is set up, we have a heat pump indoor unit on the wall downstairs, right in the center of the house. We have nothing upstairs. So the reason I was worried that the HRV wasn’t working is that one possible interpretation of the data is that we’re cooling the house adequately, but the HRV isn’t doing its job in redistributing the heat evenly throughout the house. If that’s the case, it’s kind of a big problem.

But having just spent the morning sitting down next to the windows with the heat pump off, I have a different theory. For most of the morning, it was nice and cool downstairs, but as more sun came in and the day went on, it started to get hot, just as it is upstairs in the afternoon. In other words, the heat coming in from the windows is heating the upstairs and downstairs evenly; the reason that it feels hotter upstairs is because the cooling effect of the heat pump completely counteracts the heating effect of the windows. I’ve confirmed this by turning the heat pump back on.

So this gives me some real confidence that when we get around to building and installing the louvers, we will stop experiencing overheating in the south part of the house. I’m still a little tempted to add one more ventilation supply vent (fresh air grille) on the south side of the house upstairs, but that’s something I’m hoping to have a chance to debate with the guys at Zehnder. If it needs to be done, it’s a really easy fix, because I can do it up in the utility loft, which doesn’t have a finished floor.

In August 2014, Ted Lemon wrote the following update on the overheating issue.

Over the past two years, we’ve learned that there isn’t a problem with overheating in spring. As summer approaches, before it gets really hot, night flushing is completely adequate to keep the house comfortable.

As the summer progresses, the sun gets high enough that there is minimal solar gain. Not none, but minimal. This turns out to be beneficial, because summers in Vermont are humid, but not much hotter than our preferred indoor temperature. With a little solar gain through the windows, we wind up running the heat pump in air conditioning mode enough to bring down the humidity; without the solar gain it would get too cold.

There is a bit of an issue with overheating in late summer, when the sun is lower but it’s still warm out. Louvers might help a bit with that, but I think we’re talking about somewhere between two weeks and a month, and as the weather gets crisper, night flushing should start to be effective again.

We were having trouble with overheating upstairs last summer, and I started to use a box fan laid flat to push cold air up and basically stir and mix the air in the house. This turned out to be quite effective. So partway through the summer we had Bill Congleton install a Haiku fan in the atrium. This draws about 35 watts on full blast, and we don’t generally run it on full blast because it isn’t necessary and creates too much of a breeze. Once we had the fan in, we haven’t had any problems with temperature gradients — it’s about the same temperature upstairs as down. The fan’s very pretty, too.

Low indoor humidity during the winter

The bad news is that we’re having problems with low indoor humidity during the winter. We’d originally imagined that because we were sealing the house so tightly, we’d have indoor humidity issues, but that was based on an incorrect understanding of the reason why houses get humid: lack of air exchanges. With the HRV running at 30% or 60% of capacity most of the winter, we were seeing humidity getting down into the 20-30% range, which was uncomfortable.

This is the one big failing of the fancy HVAC arrangement so far. It’s actually quite hard to counteract because there are so many point sources of air and so many exhaust ducts that there’s no good place to install a humidifier where it will affect the whole house other than inline with the HRV.

We talked with Zehnder about this, but they have had bad experiences with whole-house humidifiers causing condensation in the ducts when customers have installed them, so they strongly recommend against the installation of a humidifier.

I think it would be possible to have a very tightly controlled humidification system coupled with an HRV that wouldn’t cause condensation because it would be sensitive to the inner temperature of the house and the humidity of the input air, but that appears to be a product waiting on someone to decide to make it.

We can get the humidity up a bit by drying clothes indoors, but we don’t do enough laundry for this to be a complete solution to the problem. So this is our little bit of remaining future work; I have a few ideas, but nothing concrete enough to talk about yet.

Ted Lemon lives in Brattleboro, Vermont. He is a computer programmer and network expert who works for Nominum Inc. and is on the administrative/editorial board of the Internet Engineering Task Force. Ted and Andrea Lemon write the Vermont Passive House blog (formerly known as the “Almost Passive House” blog).