[Editor’s note: The author of this article, Stephen Thwaites, is a window manufacturer. His company, Thermotech Fiberglass Fenestration, is located in Ottawa, Ontario.]

Most of the world, especially the green building community, assumes that “European” implies “more energy-efficient.” When it comes to windows, this automatic presumption of superior energy efficiency is both so common and so misplaced that it deserves a name: the Presumptive European Superiority Syndrome.

Higher R-values (lower U-factors) for European glass are for the most part a product of different test standards rather than a refined European mastery of physics.

In other words, at 32°F, glass lites optimally spaced for 32°F insulate better than the same glass lites optimally spaced for 0°F. That’s why three lites of Europe-optimized glass has a European Uglass that is lower lower than a North American Uglass. (“Uglass” is the center-of-glass U-factor, as opposed to the whole-window U-factor shown on NFRC labels.)

For example, consider a high-solar-gain triple with two low-e coatings as shown in the drawing below: 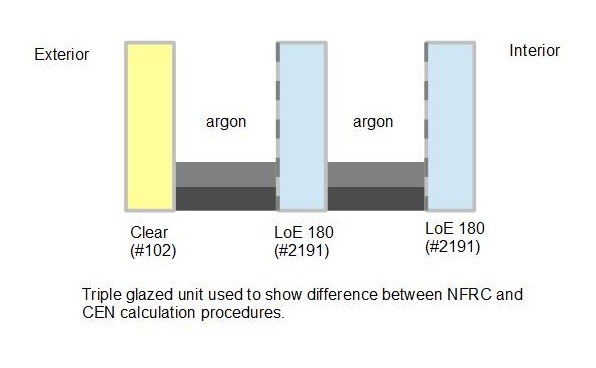 Depending on the inter-pane spacing and the calculation procedure, this glass unit can have very different U-factors.

The table below compares the U-factors of optimally spaced glass for each of the NFRC and the CEN Standards.

This triple-glazed unit, when optimally spaced for each standard and evaluated according to each standard, has very different values for Uglass. In this case the CEN Uglass is 19% lower than the North American Uglass. (0.61 vs 0.76 W/m^2K or R-9.3 vs R-7.5).

So European windows have a significant marketing advantage. Their Uglass is calculated differently, so they claim a significantly better insulating value for their glass. It’s sort of like runners comparing times for the 100, without specifying yards or meters — only worse.

More bluntly, stating the Uglass value of a European window to North Americans without identifying it as a European Uglass -value is misleading. For that example tabulated above, it is very misleading.

For more information on the implications of the above table, see the Addendum at the end of this article.

So European glass looks better because of a more favorable standard. Some people (usually Passivhaus enthusiasts) will say that European windows have a lower Uglass not only because of differences in standards, but also because “they have better glass than we do.”

I may be biased, but I’m not so sure. Take a closer look.

Because the Passivhaus program is based on European (CEN) standards, my analysis is based on calculating Uglass to CEN conditions.

The best insulating glass on the Passivhaus Institut’s Component Database for Glass is Guardian Europe’s “ClimaGuard Premium2.” It is listed as having a metric U of 0.49 when filled with krypton and having a G/SHGC of 0.53.

In imperial units that’s U-0.086 or R-11.6. That’s a mind-bogglingly good insulating value. WINDOW7.1 produces the same results for Climaguard Premium2 under CEN conditions with a glass unit constructed as shown below. So, not surprisingly, the Passivhaus Institut’s listing is a legitimate result. 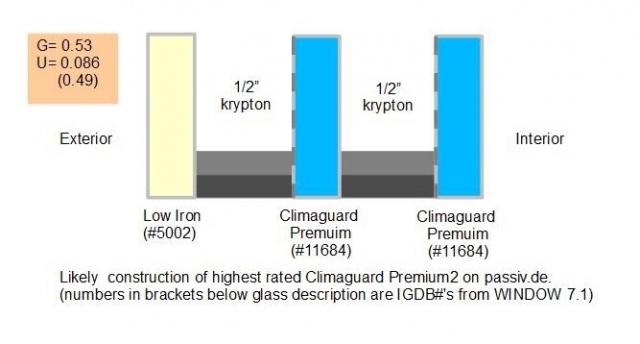 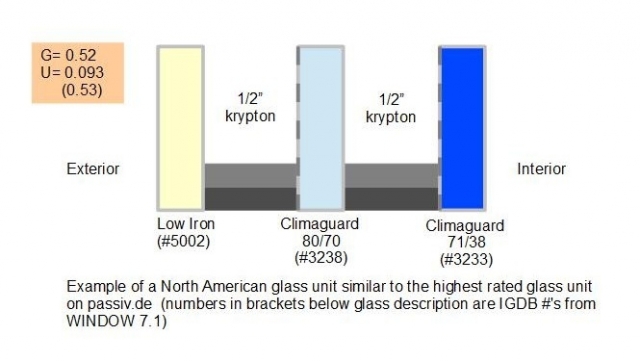 This Guardian version of a North American hybrid unit insulates slightly less well (about R-0.5 lower), and allows just slightly less solar gain (the SHGC is about 0.01 lower) than Guardian Europe’s Climaguard Premium. We could argue all day about how close is close, but the only way to evaluate the difference is not to argue over more beer, but to run PHPP.

Built by Garland Mill Timberframes in 2010, the Lancaster, New Hampshire, house is a highly glazed house in a heating climate. Its south-facing glass area is equivalent to about 17% of the floor area. This is high, but most of our custom house customers, whether building a Passivhaus or not, end up with houses with large south-facing glass areas. So, by my logic, it’s not an unreasonable example.

I used the PHPP spreadsheet for this house to compare the effect of several different glass options. The table below compares four North American hybrid glass options to the most energy-efficient European glass option. The table compares their respective G/SHGC and Uglass characteristics, along with the PHPP-generated specific heat demand.

All of the above options — some of today’s most crazily energy-efficient, most optimally spaced IGUs, with rather expensive krypton gas fills — are more energy-efficient than what was used in the 2010 New Hampshire house. That’s why all of the above glass options produce much lower specific heat demands than the 4.45 kBTU/ft^2/yr (14.2 kWh/m^2/yr) in the as-built PHPP model.

So the North American hybrid glass results in 10%-20% higher projected heating bills for this cold-climate Passivhaus than the best European glass. For this house, the difference is about 160 to 320 kWh/yr. As a worst-case scenario, with $0.15/kWh electric-resistance heating, this 10% difference amounts to about $25 to $50 per year.

I suspect that to most people the differences aren’t much. But the bragging rights do go to the European glass. Your mileage may vary, but my guess is that most heating climate Passivhaus buildings would probably get similar results. So that’s it then: the European glass is better, right?

Not so quick, Poindexter.

There is at least one other worthwhile option to consider. It’s an option that takes advantage of North America’s sunnier climate. This option uses North American high-solar-gain low-e coatings for both of its low-e surfaces. Combined with a low-iron outer lite, let’s call it a super-gain glass unit. An example of this unit is shown below. 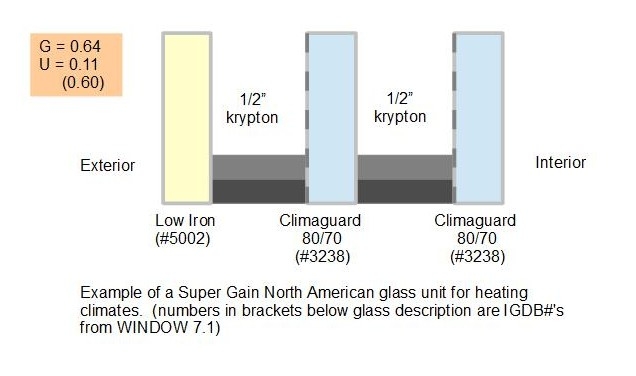 For these low-e coatings, the G/SHGC is higher than the highest rated PHI-listed unit, which is good. On the other hand, the Uglass is also higher, which is not so good. Again, the best way to assess “better” is not to argue over more beer, but to run PHPP.

Again, and as always, your mileage may vary. However, for this heating climate example, the North American high-solar-gain low-e results in about a 20% lower space heating demand than “the best” European low-e.

So not only can North American glass match the performance of European glass, but in heating climates it can also surpass it.

I do think it’s fair to say, then, that when it comes to energy-efficient glass, that there should be no automatic presumption of European superiority.

Stephen Thwaites is a professional engineer and the technical director of Thermotech Fiberglass Fenestration in Ottawa, Ontario.