[Editor’s note: The author of this article, Stephen Thwaites, is a window manufacturer. His company, Thermotech Fiberglass Fenestration, is located in Ottawa, Ontario.]

Presumptive European Superiority Syndrome applies not just to a window’s glass but its frame as well. After all, many European Passivhaus window frames have lots of insulation in them — so they must be better than North American frames, which are at best less well insulated, but more likely not insulated at all — right?

I may be biased, but I’m not so sure. Let’s take a closer look.

The Passivhaus system for rating windows emphasizes insulating ability over solar gains. But the Passivhaus approach — choosing windows based on a lower U-factor, as long as solar heat gain coefficient (SHGC) of the glass is greater than 0.5 — does not always result in the lowest energy bills.

Recognizing the flaw, the Passivhaus Institut introduced a letter rating scheme that rewards slimmer frames. (For an explanation, see page 3 of this document.) Slimmer frames allow greater solar gain than bulkier frames, which reduces heating loads, making it easier to achieve the Passivhaus heating load target. While the letter rating scheme does help, it still doesn’t always lead to the lowest energy bills.

Typically, European Passivhaus window frames, even those with an “A” rating, are bulkier than North America’s most energy-efficient windows.

Some common European Passivhaus window frames are almost 5 inches (125 mm) wide, but most are more like 4 inches (100 mm) wide. Even A-rated European frames frames are still typically 3 1/4 inches (85 mm) wide. And they are often that wide for both operable and fixed windows. 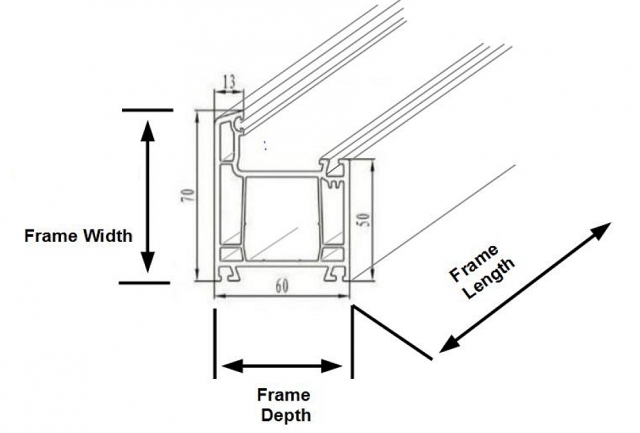 [Editor’s note: In this article, the word “width” is used to describe one of the measurements of a window frame, as shown in the illustration at left. Readers should be aware that some writers use the word “height” to describe the same dimension.]

North American outswing windows usually have frames that are about 2 3/4 inches (70 mm) wide. This is an advantage over European Passivhaus windows. On smaller windows it can be a significant advantage. For a 24″x35″ window, a 4-inch-wide frame leaves you with a window that is only 50% glass. A slimmer 2 3/4-inch-wide frame results in a window that is 63% glass for the same size of window.

When comparing heat loss through window frames (unlike when making many comparative heat loss calculations), area is a variable, not a constant. Despite insulating more poorly, a narrower frame may lose less heat.

For example, to have the same heat loss as a 4-inch-wide R-10 frame, a 2-inch-wide frame would only need to be R-5. So narrower frames have several interesting advantages.

Narrower frames are not the whole story

It certainly possible to have a long and tortured discussion about the about the many and often conflicting factors that affect window energy performance. But once again, the best way to assess “better” is not to argue over more beer, but to run PHPP.

Modeling a house with PHPP

So I ran PHPP. I compared the performance of windows with different frames at the same house in Lancaster, New Hampshire, that I used when I ran glazing comparisons. (More information about the house can be found here.)

I took the PHPP spreadsheet for the house and kept everything constant except for the characteristics of the window frames.

The results are in the table below. 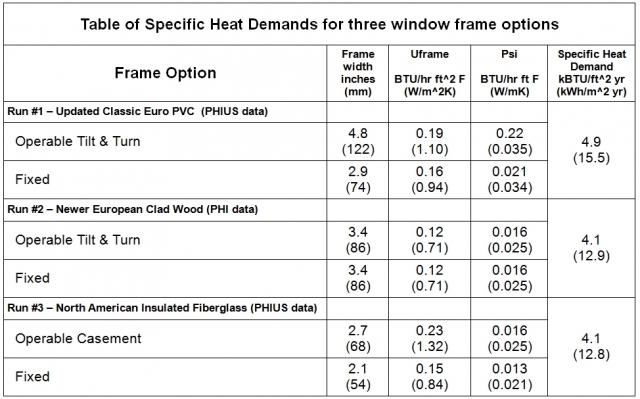 There are lots of variables

Keep in mind that your mileage may vary. Your mileage will especially vary, sometimes wildly, depending on building design, climate, proportion of fixed windows, and of course a specific window’s characteristics.

The Problem With Software

In a comment responding to my glass-focused guest blog, Jin Kazama quite correctly wrote, “The problem with using software is the involved labor and complexity to get accurate results, and the number of iterations required to measure possibilities. Most regular folks do not possess the required knowledge and the interest for the simulations, nor the budget to have someone else do it.”I think he was responding to my repeated advice to use PHPP to compare windows. I thought that my response to his comment was best placed here because the rate at which I advise the use of PHPP is even higher in this blog than the previous one.For Canadians and others in similar heating climates, there is a simple/crude tool to rank residential windows by their effect on heating bills. It’s the ER (or the Energy Rating). The ER (a value displayed on window labels) is calculated by estimating heating season solar gains through a window, and then subtracting the estimated heating season losses. With few exceptions, simulations like PHPP or HOT2000 show that houses with higher ER windows will have lower heating bills. Like the similar systems in the UK and Denmark, the ER rating is intended for houses in heating climates. Most Canadian firms report the ER for their windows. If you’d like to calculate the ER for yourself, or recalculate it with CEN data, the formula is as follows:ER = (Gains – Losses ) + 40 = (72.2* 0.8 * SHGCwindow – 21.9 * Uwindow – 0.54 AL) + 40 where:72.2 is the average Canadian heating season solar gain on a vertical surface (average means average of the four orientations, and averaged over a 5064 hour / 211 day heating season for an average location in Canada (based on where people live, not geographical geometry) in W/m^2.0.8 is a reduction factor for shading.SHGCwindow is the SHGCglass, reduced by the light-blocking effect of the frame (some grade school math may be required)21.9 is the average heating season indoor/outdoor temperature difference for an average Canadian location in degrees Kelvin/Celsius.0.54 is an air leakage constant to convert test results into an annualized loss.AL is the tested air leakage in m^3/h/m^2 of window.40 is the marketer’s fudge factor (MFF) so even double-glazed windows can have a positive ER. For new hinged or fixed windows you can easily simplify the equation by making the air leakage term zero. You’ll lose maybe 0.5 ER of accuracy, which is an error of about 1-2% for most triple-glazed windows. (For reference, the average “weather coefficients” correspond fairly closely to the weather in Ottawa, Ontario.)People too horrified at the simplifications of the ER to touch it with a 10-foot (3.3 m) pole might consider the ERS, or Energy Rating – Specific. Specific means a specific orientation in a specific city. There is off-the-shelf ERS data for about a dozen Canadian cities. As an example: for a south-facing window in Montreal, Quebec:ERSsouth = (112 * 0.8 * SHGCwindow – 22.7 * Uwindow – 0.54 AL) + 40Other Montreal orientations use other values for the solar gain; E/W = 60 W/m^2; N = 34 W/m^2.If you were so inclined you could compare your weather to Montreal’s and create your own version of ERS to rank window choices for your location. If you were so inclined.For more accuracy, without the input effort of PHPP or HOT2000, there’s always LBNL’s RESFEN or NRCan’s HOT2XP.So there are ways to compare windows that do not involve complex software.

The best bet to compare windows is to run PHPP for your building.

PHPP predicts that this house, as built, will use 4.5 kBTU/ft^2/yr (14.2 kWh/m^2/yr). Note that the common European PVC frame’s bulk would have increased the heating requirements of the house by 9%. This increase is enough to put the house over the 4.75 kBTU/ft^2/yr (15.0 kWh/m^2/yr) qualification threshold for the Passivhaus standard.

For this house, the Passivhaus version of the North American insulated fiberglass frames produce a 14% lower specific heat demand than a common European PVC window.

The results also show the advantage of slimmer frames. Although the “A”-rated PHI-listed window frame insulates much better than the Passivhaus version of the insulated fiberglass frames, its extra bulk results in a nearly identical heating bill.

Again, results like this are project-specific. Your mileage may vary; but in this case, a North American offering held its own when compared with windows that most people would assume were much more energy-efficient choices.

Again, the best bet to compare windows is to run PHPP for your building.

While European windows are terrific, until you’ve run PHPP for your building, there should be no automatic presumption of their thermal superiority.

Stephen Thwaites is a professional engineer and the technical director of Thermotech Fiberglass Fenestration in Ottawa, Ontario.