Soil: The Other Half of the Foundation

Understanding the stuff the house sits on may prevent cost overruns, callbacks and neighborhood gossip 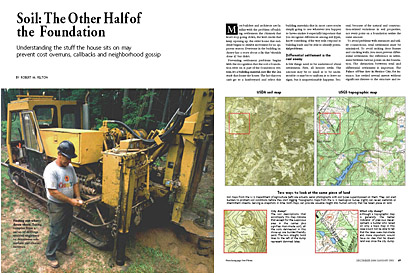 Most builders and architects are familiar with the problem of building settlement: the chimney that won’t stop going down, the wall cracks that keep opening up, the older home that suddenly begins to exhibit movement for no apparent reason. Everyone in the building industry has a story about a fix that “shoulda done it,” but didn’t.

Preventing settlement problems begins with the recognition that the soil a foundation rests on is part of the foundation system; it’s a building material, just like the 2×4 studs that frame the house. The fact that you can’t go to a lumberyard and select this building material — that in most cases you’re simply going to use whatever you happen to have — makes it especially important that you recognize differences among soil types, know something of the way soils respond to building loads and be able to identify potential problems.