The Big Picture on Ultra-High-Def TV

A shift to the next generation of televisions known as Ultra-High-Definition (UHD), and sometimes 4K, could cost U.S. consumers an additional $1 billion annually unless further energy efficiency improvements are made, according to our new report.

In fact, that energy waste could add up to an additional 8 terawatt-hours of electricity a year nationally — enough to power all the homes in San Francisco for three years. But the good news is that while UHD televisions use an average 30% more energy to operate than similarly sized high-definition (HD) televisions, that doesn’t have to be the case. Our new report shows that some of the best UHD models on the market today are dramatically more energy-efficient than the typical UHD television, using little to no more energy than the equivalent HD TV it would replace.

What exactly is UHD TV?

The TV industry is heavily promoting its latest generation of televisions being marketed under the umbrella term UHD. These televisions provide higher resolution and in some cases a wider range of colors and enhanced contrast. Their higher resolution screens have at least 8 million pixels, which is four times greater than HD televisions, and are sometimes called 4K TVs. In order to fully benefit from the higher screen resolutions, a really big 4K TV is needed.

Video Gamers Could Save Billions in Energy Costs

All About Washing Machines

Much to our surprise, about one in three televisions sold today has a screen 50 inches and greater. In general, energy use increases with larger screen sizes. One doesn’t have to look too far back to remember when 32 inches was considered a large television.

During our analysis of manufacturer-reported energy use, we observed an almost three-fold range in the electricity consumption of similarly sized UHD televisions. This means that while there are some real energy hogs out there, with the worst consuming more electricity annually than a new mid-sized refrigerator, there are some really efficient models, too. The challenge is how to ensure the industry shifts toward the more efficient designs quickly before many of today’s 300 million televisions are replaced by UHD TVs.

Most, but not all, of today’s new TVs come with a setting called Automatic Brightness Control (ABC) that automatically adjusts television screen brightness in response to changes in room light levels. From our laboratory testing of 50-inch to 55-inch televisions, we found that when enabled, ABC cuts energy consumption by a huge amount. On average, TVs with ABC off use 50% more electricity than when ABC is turned on. 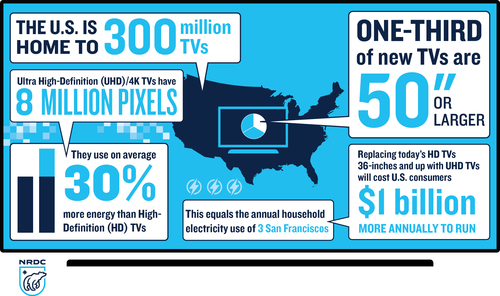 Curiously, some manufacturers include ABC technology in their televisions, but choose not to ship their TVs with this feature enabled. (If they did, more would qualify for the highly coveted Energy Star label, indicating they are among the most energy-efficient models.) We recommend that consumers dig into the menu to look for, and select, the ABC feature to save money.

The latest and greatest type of content that will be offered to viewers in the future is called High Dynamic Range (HDR), which promises more colors, brighter scenes, and blacker blacks. Prior to our study there was no published data on HDR’s incremental energy use. We obtained two movies produced in 4K HDR format and measured the power use during viewing on an UHD HDR television capable of playing it. On average, the HDR content on this TV caused the power use to increase on average by 47% compared to the 4K (non-HDR) version of the same movie.

As shown in the accompanying graph (see Image #2, below), the power use during playback varied dramatically, spiking during the very bright scenes. We were only able to perform this test on one TV, so we can’t extrapolate the results to all HDR-capable televisions, but these findings should serve as a loud wake-up call and catalyst for additional measurements and updates to the U.S. Department of Energy’s (DOE) test method, which currently only uses HD content to determine television energy consumption.

Smart TVs are usually, but not always, so smart

Most new televisions include internet connectivity which allows consumers to stream content from the web from applications like Netflix and YouTube without the need for a computer or supplemental device like Apple TV or a Roku box. While most of the Internet-connected televisions we tested had very low power levels (less than 1/2 watt in standby) and fast reboot times (below 10 seconds), some were much slower.

It’s increasingly clear that UHD TV will likely be the dominant type of television sold in the next few years, and more bells and whistles are coming. To avoid an upsurge in television energy use and the related higher energy bills and power plant emissions that come from having to generate more electricity, we need TV manufacturers and their suppliers to continue to focus on improving the energy efficiency of their new TVs.

Noah Horowitz is a senior scientist in the energy program of the Natural Resources Defense Council, where he works on a wide range of energy efficiency issues. He holds a master’s degree in environmental engineering from Illinois Institute of Technology and a bachelor’s degree in chemical engineering from Carnegie-Mellon University. This post originally appeared at NRDC Switchboard.