No matter what the source of energy — natural gas, propane, electricity, or fuel oil — water heaters use a lot of it. High-performance showers with multiple showerheads and huge bathtubs or hot tubs practically guarantee high energy bills. The object is to make sure that as little energy as possible is wasted, by choosing an efficient appliance and reducing consumption.

Regardless of the type of water heater chosen, insulating the hot water supply pipes will save energy.

The standard measure of water-heater efficiency is the energy factor (EF), which is based on heating efficiency and standby loss. The higher the EF, the more efficient the appliance and the less energy it wastes. According to the U.S. Department of Energy, EFs vary considerably:

Water heaters use a variety of fuels

Solar collectors can replace electricity or fossil fuels for producing at least a portion of domestic hot water needs.

The typical solar water heater includes one or two solar collectors on the roof, a solar storage tank, and a pump to circulate the solar fluid through the collectors. Many people in the U.S. can produce about half their domestic hot water needs needs with such a solar hot water system. In a warm climate where frost protection is not an issue, simpler equipment can be used than in a cold climate. Most solar hot water systems use the solar storage tank as a preheater for a conventional water heater which provides hot water during cloudy weather. Solar hot-water systems are a proven, mature technology, but the systems aren’t cheap — generally in the $5,000 to $9,000 range. Payback periods can be quite long; in one recent study, researchers calculated that a solar hot water system in Massachusetts had a payback period of 58 years, while one in Wisconsin had a payback period of 76 years. Payback periods are shorter in sunnier climates and in regions with high utility costs.

Indirect water heaters are connected to a boiler and don’t have their own fuel source.

An indirect water heater can be used in any house heated by a boiler. Indirect heaters have no energy source of their own; instead, they rely on a heat-exchange loop that circulates water from the boiler to a submerged coil in the bottom of the indirect tank. If the indirect tank lacks a submerged coil, an external flat-plate heat exchanger can be installed near the tank. The total lifecycle cost of an indirect water heater, including the cost of the equipment and the energy required to provide hot water for the system’s lifetime, is lower than for any other water-heating option.

Most on-demand water heaters (also called instantaneous or tankless water heaters) heat water with natural gas or propane, although electric models are also available. On-demand heaters have no tank. When someone turns on a hot water tap, a gas or electric heating element is triggered. Water is heated only as long as the tap is open. Since an on-demand water heater eliminates the standby losses experienced with tank-style heaters, they can save energy in a house with low hot water usage. Homes that use a lot of hot water will see fewer savings. In houses that use 41 gallons or less of hot water a day, the reduction in energy use is as much as 34%, according to the U.S. Department of Energy. In households that use 86 gallons a day, tankless heaters use up to 14% less energy. 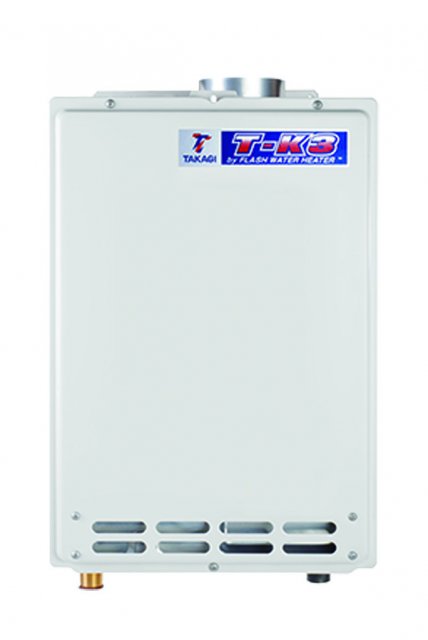 Tankless water heaters are activated when a hot-water tap is turned on.

On-demand water heaters are sized by the amount of hot water they can produce per minute, typically 2 to 5 gallons. Since cold water enters a house at a higher temperature in Florida than in Vermont, it’s important to remember that the same appliance will produce more gallons per minute in a warm climate than in a cold climate. Small-capacity heaters will be fine for one chore at a time, but not big enough for a dishwasher and a shower at the same time.

In houses that lack natural-gas service, an electric on-demand heater may be tempting. But a large-capacity heater uses a lot of juice: some models need 220V, 120-amp service. An electric water heater may still make sense, since heating water with propane costs more than heating water with electricity in many regions of the country.

Tank-style water heaters can run on electrcity or be fired by a variety of fuels, including propane,

Tank-style heaters are inexpensive, simple, dependable, and widely available. Electric and gas models are by far the most common, although oil-fired heaters also are available. Once water is brought up to temperature it sits in the tank until it’s needed. Water is reheated as necessary. All tank-style appliances lose heat as water sits in the tank. A thicker layer of insulation around the tank helps minimize this problem. “California models,” made by most manufacturers to comply with California’s tough energy codes, come with R-15 or greater insulation. That’s more than twice as much as a conventional tank heater.

Heat-pump water heaters are more efficient than conventional electric-resistance water heaters, and they have low operating costs. They pull heat from the air and transfer it to water in a storage tank. In the U.S., engineers have developed and promoted heat-pump water heaters for years, and several electric utilities have launched pilot programs providing incentives for their purchase. Among the hurdles faced by manufacturers of heat-pump water heaters is the high initial cost, the need for a waste pipe near the appliance to handle condensate, and reliability problems with early prototypes.

In hot climates, heat-pump water heaters have an added benefit: they cool the air in the room where they are located. They also act as dehumidifiers, which can be a useful benefit when the appliance is installed in a damp basement.

Condensing boilers extract latent heat that is ordinarily lost up the chimney.

Most heat-pump water heaters require the occasional use of a backup electric resistance element in the tank. When the demand for hot water exceeds the capacity of the heat pump, the appliance starts working like a conventional electric tank heater.

All About Water Heaters

In a green home the need for hot water should be reduced by installing low-flow showerheads and faucets and by choosing efficient clothes washers and dishwashers. Water can be heated efficiently with a solar hot water system, an on-demand gas or electric heater, or a tank-style heater using gas or electricity. In areas without access to natural gas, a heat-pump water heater will save energy. If the home has hydronic heat, it’s best to install an indirect water heater hooked up to the boiler.

If you feel guilty running the shower until it’s hot enough to climb in, this may be for you. A temperature sensor keeps water circulating through an extra set of pipes back to the water heater until it reaches your desired temperature. These systems are usually installed for comfort and convenience. Pretty much any setup will save precious water — possibly thousands of gallons per year — and the right system could save energy. But if you choose the wrong system, your energy bills will rise.

There are basically two choices:

On-demand systems don’t activate until you turn on the hot water tap (or a manual switch near the tap). These systems waste less energy than timed systems, and may even save energy. If you’re far from the heater there can be a bit of a lag until the water reaches you. You could cut the wait down by installing a motion sensor that turns on the pump before you actually turn the tap.

In a timed system, the hot water circulation pump is controlled by a timer that is programmed according to the occupants’ daily routine. The idea is for the pump to circulate hot water before times of high demand, just like you set your digital thermostats to warm your house only when you expect to be home. If you are concerned about saving energy, don’t install a timed recirculation system.

All hot-water lines should be well insulated to keep heat loss to a minimum.

Green layouts deliver water directly to each plumbing fixture, faucet and shower head by its own supply line. All of the individual supply lines are connected to a central manifold. Since hot-water supply lines have a smaller diameter and fewer fittings that the lines in a conventional trunk-and-branch system, less water and energy are wasted waiting for hot water to reach a distant faucet.

Think about the whole system

The heat source is only one part of your water heating system. If that’s all you’re thinking about, you’re missing other opportunities for energy and water savings.

1. Insulate your hot water pipes and keep them in conditioned spaces.

2. Insulate your tank heater too, if you’ve got one (and if the manufacturer allows), and install any heater in an insulated portion of the house.

3. Check for leaks. When pipes leak you lose water; when hot water pipes leak you waste energy too. Keep an eye out for drips, but check your water meter or use a pressure gauge to see if water is moving where you can’t see it.

When installing a tank-style water heater, look for the highest EF available and buy an Energy Star model where available. Compare warranties; an appliance with a longer guarantee may last longer before it must be replaced.

Chapter 28 is dedicated to water heaters. Water Heaters must be accessible for routine service, observation, and repair (2801.3). Water heaters located in an area where a leaking tank could cause damage to the structure must be installed on a 24-gauge galvanized pan at least 1 1/2 inches deep. The pan must be connected to a 3/4-inch minimum diameter drain line discharging into a suitable receptor or outside the structure between 6 in. and 24 in. above grade.

Liquid or gas-fueled water heaters located inside a garage must have their ignition sources at least 18 in. above the garage floor (2801.6). Section 2803 provides specifications for temperature- and pressure-relief valves, both of which are required on all water heaters.

Tank-style heaters range in size from 20 gallons to 120 gallons. If the tank is bigger than it has to be, standby losses are higher and more water is heated than is needed — wasteful on two counts. But if the tank is too small it won’t keep up with demand. The key in sizing the tank correctly is its first-hour rating.

###Marketing is all in a name

Electric heaters are more efficient — that is, they convert more of the energy they consume into hot water — and they are somewhat less expensive than comparable gas models. But over the course of their service life, electric heaters typically cost more to operate.

The American Council for an Energy-Efficient Economy estimates the life-cycle costs for a standard electric hot water heater are 30% higher than those for a high-efficiency gas heater. Of course, savings vary depending on local energy costs.